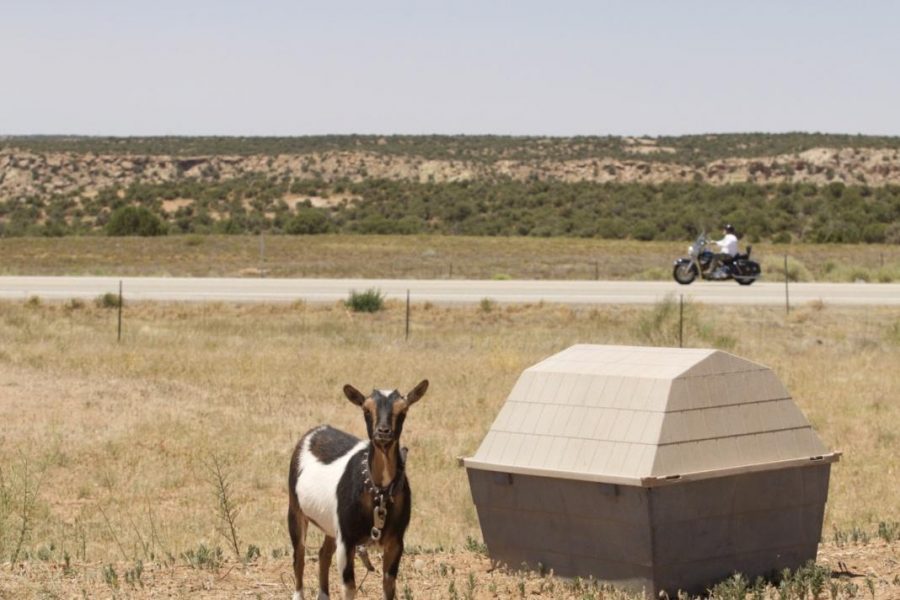 A pet goat on the White Mesa Ute Indian reservation.

The greatest experience I have had at The Daily Utah Chronicle was researching and writing about the White Mesa Uranium Mill in southern Utah. The mill, which is the last uranium processing mill in the United States, is located a few miles north of the White Mesa Ute Indian Tribe reservation. As I learned during my investigation, most White Mesa residents do not drink their tap water out of fear of contamination by the mill.

I first heard about the White Mesa mill after reading an op-ed published by The Salt Lake Tribune in June 2017. It was written by Yolanda Badback, a White Mesa resident, who wrote: “Let our children live their lives free of fear of getting cancer from the mill. Let them spend time outside without smelling chemicals from the mill, or breathing dust from the mill. Let them drink our spring water and use spring water for ceremonies without fear of radioactivity.”

The article immediately caught my attention, and I began reaching out to people from the area who knew about the mill. I spoke with a water specialist for the Ute Mountain Ute Tribe, as well as people from Grand Canyon Trust, an environmental advocacy group involved in lawsuits against Energy Fuels Resources, the company that owns the White Mesa Uranium Mill.

When it came to reaching out to White Mesa residents, I learned that many didn’t have cell phones or were otherwise difficult to get in contact with. So, I planned a trip to White Mesa, which is about 335 miles from Salt Lake City in the southeastern corner of Utah.

The drive was long and accompanied by a number of albums, including Pink Floyd’s “Meddle,” Type O Negative’s “Bloody Kisses,” ISIS’s “Panopticon” and Sleep’s “Dopesmoker.” After spending a night at the Four Corners Inn on the southern edge of Blanding, the town closest to White Mesa, I woke up early and drove towards White Mesa.

Driving on U.S. Route 191, I noticed the uranium mill just to the right of the highway. I turned right, drove to the gate which was marked with “CAUTION: RADIOACTIVE MATERIALS” signs, where I asked on an intercom if I could speak to someone about the mill. Minutes later, two men in a truck drove out and handed me a business card, telling me to direct any questions I may have to the number on the card. I asked for their names, but they declined to provide them.

After that, I headed to the White Mesa reservation and began speaking with people. I spoke with a man who had

grown up on the reservation and feared the mill would have long-term health effects on White Mesa residents. I spoke with two former mill employees who complained about the way the mill was operated, including safety procedures and treatment of Native American employees. I spoke with a woman who said she drank her tap water a few weeks ago and it made her feel sick.

One man, who asked not to be named, invited me into his living room and spoke with me for over an hour about his life. He had been involved with gangs, lived all over the country and told me he was back in White Mesa, where he grew up, to be with his step-mother during her cancer treatment.

After a morning, afternoon and evening of knocking on doors and driving around the mill’s perimeter, I called it a day and drove back to Salt Lake City. I spent the next three weeks transcribing interviews and reading through court and government documents before writing the story, which was published on July 27.

I learned a lot covering White Mesa, like how to find a story, how to pitch it to an editor and how to track down people who you can’t call or email. As I prepare to graduate and leave the Chronicle, I am glad to have had the opportunity to work on an investigation that changed my life in many ways.