Student-Athletes Wrap up their Athletic Careers 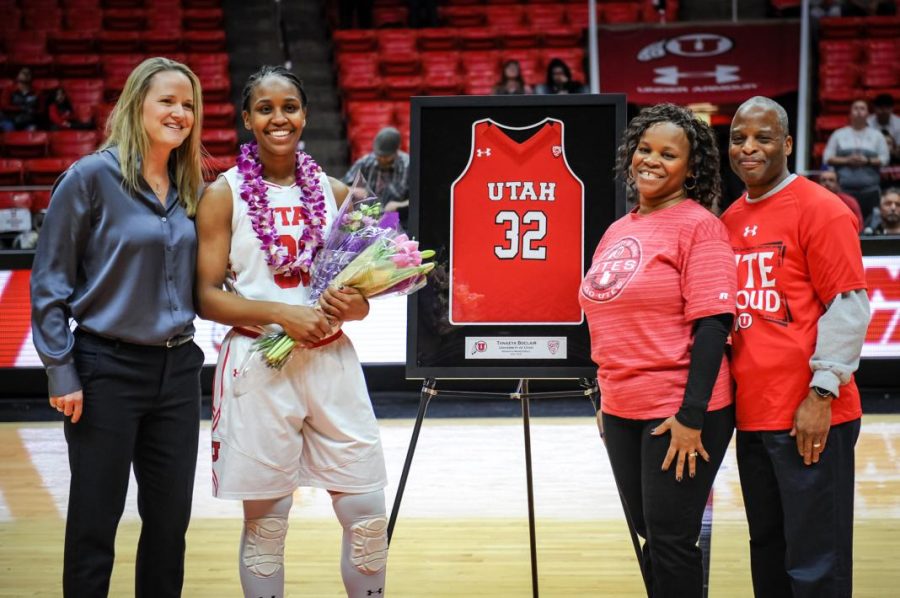 Senior Utah Utes forward Tanaeya Boclair (32) celebrating her career at the University of Utah after the final home game against the Lady Huskies from the University of Washington at the Huntsman Center in Salt Lake City, UT on Sunday, Feb. 18, 2018 (Photo by Adam Fondren | Daily Utah Chronicle)

Senior year seems to come and go before students have even made a game plan. For University of Utah student-athletes, their careers as Utes are approaching the finish line. Each of them will have unique stories and experiences to share once they’re done, however, one concern they have in common is what they are going to do when they are no longer a part of a team.

“It was hard, but I felt complete,” Rogers said. “I was satisfied with my career and obviously some things don’t go how you want them to, but that’s just sports.”

Even though the swimming and diving season is over, he continues to work out and enjoy his extra free time being a normal college student. Rogers has done his best to create a life outside of sports so the transition would be easier when his career came to an end. After speaking with several graduating athletes, the consensus was their time as a Ute went by too fast and they are still trying to accept that it’s over. Although, they feel somewhat ready to make the transition from athletics and take on their next challenge.

Some also look forward to taking a physical and mental rest from the intense practices and competitions. A few have expressed how being a student-athlete has been a major part of their image, something that will be hard to let go of.

“I started [swimming] when I was 5, so pretty much my whole life,” Rogers said.

It is not uncommon to hear the dedication college athletes put into their sport. As the end of senior year approaches, it’s as if an era has ended.

“I think it’s going to be weird. … I already tell people that I’m officially a has-been,” said Tanaeya Boclair, a wing for the women’s basketball team. “It’s going to be strange, but I’m not losing basketball completely.”

Boclair just finished her final season as a Ute and will spend the remainder of the school year focusing on academics and helping others. With her extra time, she wishes to give back to those who have made her student-athlete experience memorable. Boclair plans to work with the women’s basketball team as a graduate assistant next season.

While finding a new role is often scary, post-graduation life can be thrilling. It’s a chance to change routines, try new hobbies, start a career and meet people outside of athletics. Boclair offered some advice for the seniors having a difficult time leaving behind a significant part of their identity.

Sports have the ability to teach skills that can be applied in future situations, such as leadership, work ethic and teamwork. Boclair expressed fear and excitement is normal, and she emphasized that finishing college athletics is not the end of an athlete’s capabilities. Rogers suggested reaching out to others who may be struggling with the same transition. So while identifying as a student-athlete has provided a level of comfort for soon to be has-beens as Boclair puts it, there is an exciting future ahead for graduating Utes.