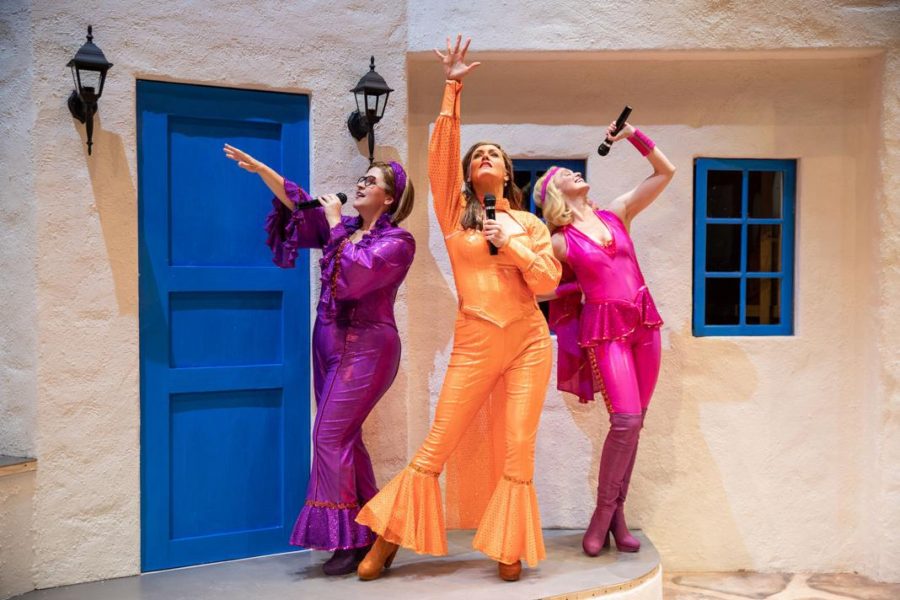 Here we go again. If you are pining for a bygone era of bell-bottoms, disco balls and terrible haircuts, you may want to experience Pioneer Theatre Company’s production of “Mamma Mia!” This final addition to the 2017-2018 season is a comedic tale of a young bride-to-be’s misadventures, set to some of the most popular music of the 1970s. Set at a resort on a fictional Greek island, the musical tells the story of Sophie, who is preparing to marry her fiancé, Sky. Though Sophie has a close relationship with her mother Donna, she has no information about her father, and she wants to meet him and ask him to walk her down the aisle. Sophie discovers three possible candidates for her father and invites them all to the island right before her wedding. Meanwhile, Donna reconnects with her best friends (and former disco bandmates) Tanya and Rosie.

The production was a massive success on Broadway and West End, where the show has run continuously since its debut in 1999. The musical was also adapted into a successful 2008 film starring Meryl Streep and Amanda Seyfried — a sequel is scheduled for release this July. “Mamma Mia!” is new to PTC, but Utah audiences have seen this musical in Salt Lake City with Broadway Across America and at Tuacahn Amphitheatre in Ivins. This production is directed by Patricia Wilcox, who has worked as a choreographer for PTC’s “Peter and the Starcatcher” and Broadway productions of “Motown the Musical” and “A Night With Janis Joplin.”

The musical’s score is made up entirely of existing songs from the disco pop group ABBA (playwright Catherine Johnson wrote the book). This Swedish band was one of the most popular bands of the 1970s, earning millions of fans worldwide and spawning many hit singles, including “Mamma Mia,” “Dancing Queen,” “Take a Chance On Me” and “Super Trouper.” ABBA’s music and public image became one of the defining elements of 1970s pop culture. Most of the band’s major hits are performed in the musical, and the show has been particularly well received by fans of the band.

The show has gained a reputation as a crowd pleaser for all kinds of audiences. It helps that the ABBA music is both catchy and ubiquitous. Combining good humor, appealingly goofy disco dancing and a healthy dose of 70s nostalgia, this show is a guaranteed dance-along hit. In a review of the Broadway production, The New York Times compared the show to “alchemical magic” and called it the “theatrical equivalent of comfort food.” This production is sure to please ABBA supporters while converting a brand new generation of dancing queens. Don’t miss the chance to experience this feel-good hit which has become one of the most beloved musicals of the twenty-first century.

“Mamma Mia!” will run from May 11 – May 26 at Pioneer Theatre Company. Performances will be at 7:00 p.m. on Mondays through Thursdays and at 7:30 p.m. on Fridays and Saturdays, with an additional 2:00 p.m. matinee on Saturdays. For ticket pricing, including information on discounts for U of U students, visit pioneertheatre.org.