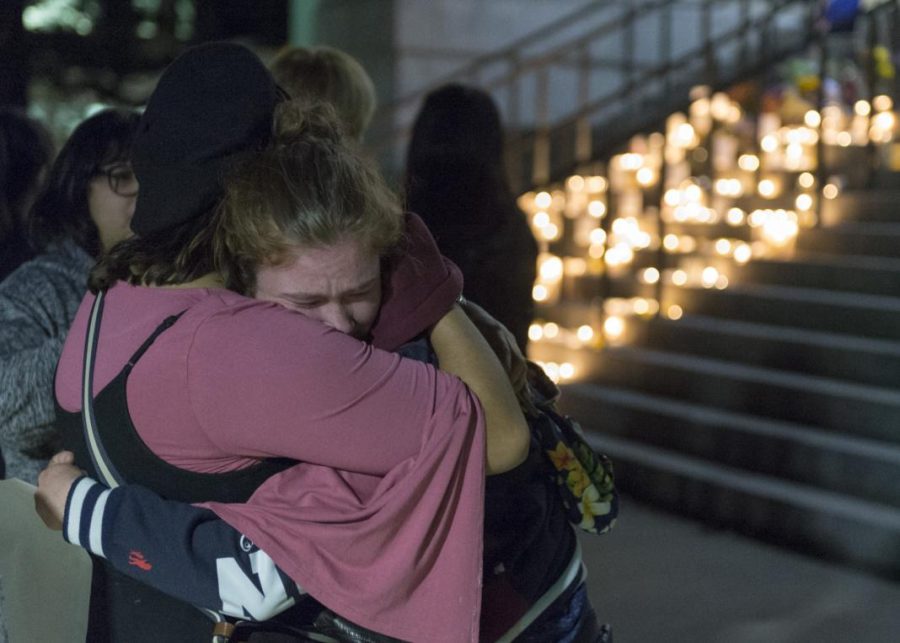 Students, staff, and friends of ChenWei Guo came to show their support after the recent shooting tragedy in Red Butte Canyon by lighting candles and walking from the Marriott Library to President's circle for a candle light vigil to share their condolences on Wednesday, Nov. 1, 2017 (Photo by Kiffer Creveling | The Daily Utah Chronicle)

Each year since the 1999 shooting at Columbine High School, the United States has been inflicted with a rash of school shootings — resulting in the loss hundreds of students’ lives. A recent school shooting that captured national attention occurred at Marjory Stoneman Douglas High School in Parkland, Florida, on Valentine’s Day. Former student Nikolas Cruz killed 17 people. All but three were students.

In the aftermath of the shooting, a heated debate regarding gun rights ripped across the country. Students organized protests calling for stricter gun control measures, while gun rights advocates organized rallies in support of the Second Amendment.

Students from Marjory Stoneman led the call for gun reform and organized the nationwide March for Our Lives on March 24. As the Parkland activists took over Pennsylvania Avenue in Washington, D.C., more than 8,000 people in Utah gathered at West High School in Salt Lake City to march to the State Capitol.

Among them were multiple representatives from the College Democrats at the University of Utah, holding signs that read, “People with guns kill people,” “Students demand gun reform” and “Choose me, not guns.”

In the midst of the protests, some people pointed fingers at the Parkland students, saying they were taking advantage of the tragedy to become famous. They felt that if the students were truly impacted by the shooting, they wouldn’t be rallying in the streets so soon after.

“I don’t think it makes sense that you need to wait to talk about anything,” said Elise Scott, associate director of the College Democrats at the U. “I generally think that it’s kind of intellectually dishonest and it’s not very curious to think that there’s a time limit to talk about important things, especially when people’s safety is on the line. With Parkland, it’s especially egregious because you have the survivors themselves telling you that they need help and asking for an audience and people speak over them. I don’t know how you retain any credibility when you speak over people who actually lived through the event.”

Scott feels that there should be comprehensive gun reform on the federal level — first improving background checks and making them required for all firearms purchases, then considering specific weapons bans.

“I wish that we were not in a state where a shooting was required to change gun laws, because I understand why that makes people nervous — it feels like a knee-jerk reaction,” Scott said. “I do think gun laws should change, though, and they should change in order to prevent more shootings.”

College Republicans at the U said it agrees with the College Democrats on one thing — safety should be a priority for lawmakers. When it comes to the actual debate concerning gun rights, however, the group echoes many of the sentiments heard from those on the right in wider discussions across the country.

“We need to improve school security depending on a school’s needs and the resources they have,” said Frances Floresca with College Republicans at the U. “Some of these include door locks, safe rooms, armed resource officers and on-site law enforcement, or create other innovative solutions.”

While Floresca believes that more measures should be taken to secure schools and ensure students’ mental welfare, she does not want the government to make any moves that would further reduce gun rights.

“I strongly believe in the right to bear arms. After all, it is protected under the Second Amendment of the United States Constitution,” Floresca said. “Most people with guns are law-abiding citizens, with a few exceptions. We need to arm our law-abiding citizens better. We need some regulations on how guns are obtained, but still respecting the right to bear arms. A lot more regulations can lead to more law breaking.”

Preparing for a School Shooting Scenario

Ten men and three women from College Republicans at the U lined up at the Lee Kay Public Shooting Range in December with guns cocked and loaded.

“The range is clear. The range is open. There will be another ceasefire in 15 minutes,” said a range safety officer over an intercom.

Bullets launched down the barrels of guns and whirred toward colorful targets — some with a bullseye, others in the shape of a torso. The College Republicans had just completed its first group concealed carry permit course, led by Nic Dunn and Hayden Hoffman of Code 4 Defense.

At the U, students are allowed to carry weapons on campus. The Utah State Legislature is the only body with the ability to regulate firearms at higher education institutions in the state. Although the university cannot impose additional rules regarding guns, students living on campus are granted the right to request roommates who do not have concealed carry permits.

Because Utah’s gun laws are more on the lax side, it only requires concealed carry courses to teach students how to safely handle a gun and laws regarding firearms in the state — as long as the class lasts at least four hours. Dunn and Hoffman, however, also instruct students on how to react in situations when they might need to use force.

“Utah does a big disservice to people who are getting their concealed weapons because it’s not that simple,” Hoffman said.

Hoffman, who is also a police officer, told a story about a time he and his colleagues encountered a shooting situation to demonstrate how adrenaline can affect someone in a stressful situation. The shooter fired 17 rounds of ammunition – all that was in his gun — at the police. Officers returned 68 rounds because the adrenaline impacted their judgement and made their fingers heavy, he said.

After walking students through scenarios that could result in violence and advising them on how long to wait to shoot, Hoffman gave the group his vote of confidence.

“You guys are now on my team,” Hoffman said. “You are now an extension of the police force — that’s how I see you.”

The training was held just over a month after U student ChenWei Guo was killed in an Oct. 30 shooting in a parking area at the mouth of Red Butte Canyon near campus.

Austin Boutain and his wife, Kathleen Boutain, were on the run and were wanted for a homicide committed three days prior in Golden, Colorado. The couple had stolen a green pickup truck from the victim, which they sold, and were looking for a new getaway vehicle while camping in the canyon.

In an unsuccessful carjack attempt after a domestic dispute with his wife, Austin Boutain fatally shot Guo as he was sitting in the driver seat of his car. Another U student, a female who was friends with Guo, had been sitting in the passenger seat. After the shooting, Austin Boutain tried to force her back up the canyon with him. He shot at her twice and narrowly missed as she fled on foot.

When the shooting occurred, Kathleen Boutain was at the Peterson Heritage Center — the hub of student housing on campus — seeking medical help for her husband’s abuse. There, she was detained and later questioned by police.

Students living in the dorms, many of whom heard the gunshots, were ordered by campus police to “shelter in place” at 9 p.m. as they set out on a manhunt for Austin Boutain. The order was not lifted until around 3 a.m.

Austin Boutain was arrested the next afternoon at the Salt Lake City Library after a librarian recognized him and called security.

Two days after the shooting, hundreds of students, faculty and friends of Guo gathered outside the Marriott Library at the U to march in solidarity toward the Park Building. On the steps in front of the building stood a picture of Guo, at the base of which attendees laid flowers and lit candles.

Some College Republicans attending the concealed carry permit course felt becoming armed is the best way to protect themselves and prevent another tragedy at the school. Among those is Ryann Peterson, who said she plans to carry a gun on campus.

“I was more scared because I didn’t have a way to defend myself,” Peterson said. “I couldn’t protect myself or my roommates because I don’t have this concealed carry. It’s comforting now that I will be able to have one. I will be more secure knowing that yes, I am safe in my room, but if something does happen, I can protect people.”

Elise Scott of the College Democrats at the U was standing outside of her dormitory building when Guo was killed. After hearing gunshots echo off of the nearby mountains, she spent the next four hours hiding in a closet — unsure if it was a mass shooting, similar to those happening at schools across the country.

“I’m a little touchy about it, because it is clearly very personal, and I’m absolutely heartbroken that someone lost their life for something like a carjacking gone wrong,” Scott said. “I do think there are more discussions to be had.”

Peterson agreed that there ought to be some limitations on access to guns, but she is concerned about those regulations encroaching on her Second Amendment rights.

“I feel like if you’re mentally disabled or if you’re a repeat offender, like [Boutain] clearly was, you should not be able to have access to [guns],” Peterson said. “It is better, if [people like Boutain] have a gun, for the people that actually do know the laws to be able to lawfully protect themselves.”

Going Forward with Guns in Mind

No matter what direction gun laws take in the U.S., students will be an integral part of their shaping. Students ranging in age from kindergarten through high school have been walking out of school to have their voices heard on gun reform — even if that means being suspended.

Even if students’ activism negatively impacts their academic record, the U has pledged not to penalize these applicants.

In a post on Facebook on Feb. 27, the U’s admissions office wrote, “An applicant’s participation or lack of participation in peaceful protests is not a reason for the University of Utah to deny or rescind an offer of admission.”

The young activists working to change public policy in the country, won’t counted out of the school’s future student body.

“The University of Utah respects the rights of students to participate in active and responsible civic engagement,” read the admissions office’s post.