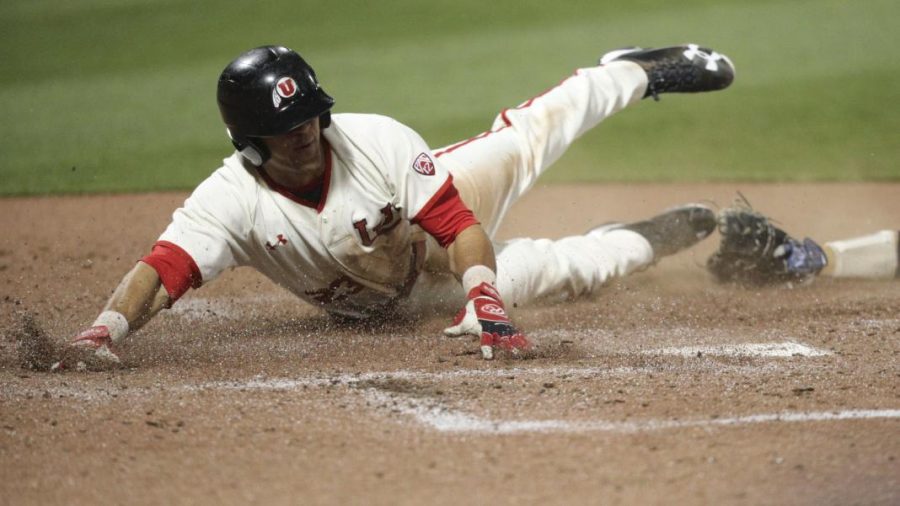 Utes infielder Dallas Carroll (23) scores from Dominic Foscalina's sacrifice fly in the bottom of the fifth to make the score 7-4 against BYU at Smiths Ballpark on Tuesday, March 28, 2017. (Chris Ayers|Daily Utah Chronicle.)

In their final Pac-12 series of the year, the University of Utah baseball team headed to Pullman to take on Washington State University. The Utes walked away from this final weekend of play with a victory in the series, giving up only one loss to the Cougars.

On Thursday during game one, Utah had a big loss to the Cougars, and they managed only nine hits and five runs to the thirteen hits and fourteen runs that Washington State put up. However, both Erick Migueles and Dominic Foscalina hit home runs to contribute to the five runs.

Utah had a 5-3 lead going into the bottom of the fifth, but Washington scored eleven runs in the following four innings to shut the Utes down and take the victory.

During this game, DaShawn Keirsey Jr. had a 2 for 5 day at the plate, contributing one run and an RBI. Keirsey’s run scored was achieved by stealing home plate, and this brought him up to seven stolen bases on the season. Migueles also had a successful day going 2 for 3 and bringing in two RBI’s.

Friday brought game two and the first Pac-12 win for the Utes since they played Arizona in April. They scored nine runs to the Cougar’s three. Utah managed 12 hits in their 9-3 victory over Washington State.

The Utes trailed by one run going into the seventh inning, but scored six runs between the seventh and the eighth, and took two more in the ninth to ensure their victory.

Freshman Oliver Dunn went 3 for 5 and was responsible for three of Utah’s runs. Foscalina went 2 for 4 with three RBI’s. Junior Chandler Anderson also helped in three runs to put toward the victory.

Junior pitcher Josh Tedeschi had seven strikeouts on the game and allowed only three runs off of nine hits for the victory. Tedeschi also only walked one batter, and Trenton Stolz picked up where Tedeschi left off and allowed no hits and struck out two in the final 1 ⅓ innings to ensure his eighth save on the season.

The last game of the 2018 season for Utah was on Saturday, and Utah managed an exciting 12-11 victory to close out their season. Washington had a big comeback at the end of the game, but Utah still came out ahead.

Although they were out-hit by Washington, Utah still managed 12 runs on 12 hits to take home their final victory of the season. Migueles went 2 for 2 and contributed two home runs and four RBI’s to the win, as well as two walks. Three other players also brought forth two hits and two RBI’s, as well as a home run from Rykker Tom.

Utah took a 4-0 lead in the first inning and kept their lead throughout the game despite Washington State’s many efforts to come back throughout the game. The Cougars tied the game up at nine in the seventh, but a three-run homer from Migueles gave the Utes the comfortable lead that they needed going into the bottom of the eighth.

Washington State closed the gap on the lead in the bottom of the eighth but was unable to creep past the Utes, and Utah walked away with the win and the victory over the series.

This series in Pullman marks the end of Utah baseball’s 2018 season, and they finished out with a 16-39 overall record, and eight wins and 22 losses in Pac-12 conference play.