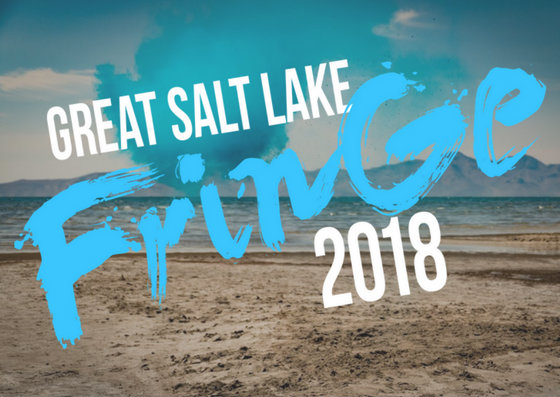 Are you hyped for The Great Salt Lake Fringe Festival? Well, get fringey. Starting this week are nearly thirty theatrical events which will take place in under ten days.  You won’t want to miss this.

In Spite of Ourselves

“You, me and a bed in the center of it all.” This is the line Cate Heiner quoted when talking about her inspiration for “In Spite of Ourselves.” She was fascinated by the idea of using the phrase as a stage direction — so much so that she wrote a play around it. Her script is an experiment, like many Fringe pieces. Heiner said she “didn’t know what would happen.” It was initially read in a new play workshop at the University of Utah, where one actors liked it enough to reach out to Heiner and ask if she was interested in taking it to Fringe.

From there, actress Hannah Ensign fronted the entire PR process while playing one of the two characters. Actor Maxwell Paris plays the other leading role. Describing their work together, Heiner said, “Max and Hannah really bring a lovely innocence to the performance.” Heiner hopes that this innocence will help “In Spite of Ourselves” to stand out amidst the plethora of other options. “The tone of my play balances the darker shows because it’s moving towards a bitter sweet,” Heiner explained. “My play likes to exist in this weird space between falling in love and falling out of love.”

Love is simple and yet complex, easy while it takes work, and that is what Heiner is exploring. Love also stands outside of time, so there is no explicit timeline in her show. Heiner said, “It does have a beginning, a middle and an end, but they don’t have to happen in that order and you can decide what they are.” This active participation will draw in audiences and hopefully inspire discussion. Where does love start? Why does it happen? And what is in the center of it all?

Be sure to check out “In Spite of Ourselves,” a lovely little play about love.

Other plays during the Festival include…

Falling in and out of love seems to be a theme for this year. However, this show makes it immersive and invites you into the action, as close as you want to get to the actors. Don’t forget your walking shoes for this show as you will be wandering Salt Lake City and experiencing the magic of it for the first time all over again.

Roswell, New Mexico. It might not be a significant destination on your map, but for three sisters it’s a different story. Whether it’s awe or distaste, Roswell inspires something, and maybe offers something else too.

This is the Plays

Missing the 80’s? How about musicals or Mormonism? Experience it all, “one sister at a time,” with this show. Just be warned that these stories might not be exactly as you remember them in the performance.

In the End There was Snow

Mystery, tragedy, deep emotional resonance and even a little bittersweet sadness. This play promises it all. Will it deliver? Pygmalion is all about human experience centered around women, so it might.

This piece journeys to Fringe from the Spiral Jetty. Science and arts combine to explore fossils and the lives they memorialize. The inspiration was found through research at the Rozel oil seeps.

Louis XIV, also known as the Sun King, was famous for his extravagance. This show asks whether that extravagance was madness or merely cleverness. The answer is interesting — and perhaps it can be applied to other politicians.

Stay tuned this week for more peeks into this year’s line up.