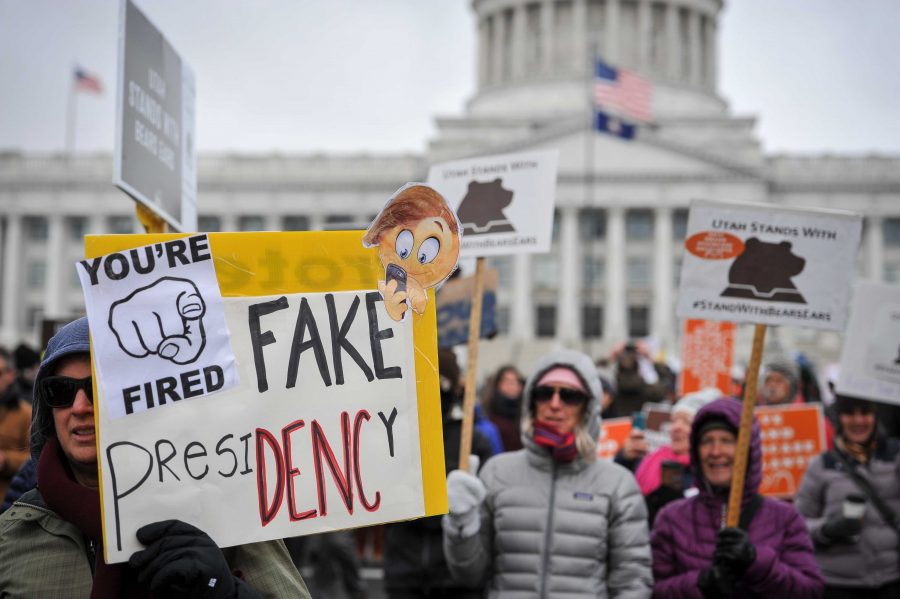 At the protest downtown against President Donald Trump during his visit to the State Capitol in Salt Lake City on Monday, Dec. 4, 2017. Chronicle archives.

There are two surefire ways to make the internet an unpleasant experience: bring up politics on social media and then read the comments that follow.

The Venn diagram between online politics and online fiery debate is functionally a circle, as evidenced by the depravity found everywhere from harassment under YouTube videos to comment section brawls on local newspaper websites. The internet is a wilderness bursting with ruffians who encourage bad behavior and bring out the worst in everyone. Social network aggregations are capable of hosting nuanced policy discussions — elite newspapers like The New York Times run opinion pieces about the “inevitability” of sexual redistribution. In internet land, political opinion runs the gamut. Users must contort their thought processes to consume volumes of ideology at their fingertips.

This aspect of internet culture has been around since its inception, but the widespread embrace of buzzwords increases its political potency. Internet use involves the acquisition of false equivalencies and bad habits, especially as human identity becomes two selves — the online and “in real life.” Thanks to the internet, political information is more accessible. No thanks to the internet, political information is distorted in distribution.

While not every contemporary slogan or insult is born directly from the internet, they’re made for the internet. The online is a transcendent realm that rewards agitating content, regardless of where it’s uttered. The ultimate requirement of modern propaganda is that it be snappy. Why would any clever politician coin a phrase without first considering its hashtag potential? The unlucky coincidence that President Donald Trump and the internet — specifically Twitter — emerged at the same spot on the world timeline has revolutionized political branding. Perhaps targeted messaging would have arrived at deliberate hashtag use eventually, but Trump fast-tracked it during his campaign by using it more boldly than any politician before him.

If this phenomenon were realized in a museum, its halls would host adulterated Pepe memes, an avalanche of snowflakes and hats — MAGA and pink-knit alike. Signposts reading “#Deplorables” and “#TheResistance” would direct crowds into their respective echo chambers where they might continue to hash out only the most pressing socio-political matters — such as the 2016 presidential election. As for the gift shop in this imagined museum, there would be no need to create separate aisles to peddle “Nasty Woman” mugs, “Nevertheless, She Persisted” t-shirts and farcical safety pin brooches, as everything has been designed to be commercialized.

The internet is a museum for language, where everything is archived as terms float in and out of fashion. Language is helpful for people as they attempt to process or cope with new and difficult information. It offers comprehension and an avenue for response. That’s why it’s so aggravating to see throngs of freshly minted political activists fall for cheap arguments and transparent marketing ploys en masse. Americans are deeply riled — and despite their differences, the internet is their shared battleground.

But who could blame us? Our president ran his campaign on digital drills of “#FakeNews,” “alternative facts” and “Crooked Hillary.” He then spread it through the unhesitating chants of “Lock her up!” or “Build the wall!” by his enraptured cronies. Whether they support Trump or not, various smaller political movements emulate his tactics, using quick terms like “triggered” and “cuck”. Though no one escapes them, nicknames vary in quality from “Drumpf” to “Killary” to “Obummer.” Activists troll Twitter just as Trump does, taking turns calling each other snowflakes in efforts that are ultimately a waste of time.

While such internet slang is an inevitable byproduct of the situation, people should at least be aware of their adoption of these narratives. Their participation has consequences, and the criticism shouldn’t be written off as mere tone policing or censorship. The “messaging via meme” methods are dynamic, creative and humorous, but they are the empty calories of a media diet. They hammer people into a specific frame of mind and then short-circuit their attention span. Analysis becomes sloppy, conclusions convenient.

Critical thinking is crucial for outlasting the Trump era. People of all ideologies shouldn’t avoid these buzzwords in a pearl-clutching attempt to remain civil, they should reject them because they’re sophomoric. Quips are appropriate to slap on a protest sign, but effective citizen advocacy requires nuance. For those who want to avoid losing important battles, less contrived terms will reveal what the field actually looks like.

In a world determined by algorithms and interactions, account for bias. It’s far past the time to only communicate in manufactured, interchangeable terms, let alone to waste time arguing with people who reject proven facts in general.

Unfortunately, this branding debacle has no true escape. It’s human nature to package information into useful segments that are memorable and mass produced. The internet just makes it easier. Even the hottest political terms of today were in play hundreds of years ago — the term snowflake once referenced white Missourians who opposed the abolition of slavery. Fake news is an immortal problem. It’s not rational to ask for the extinction of these terms, but modern debate would benefit from a change away from them.