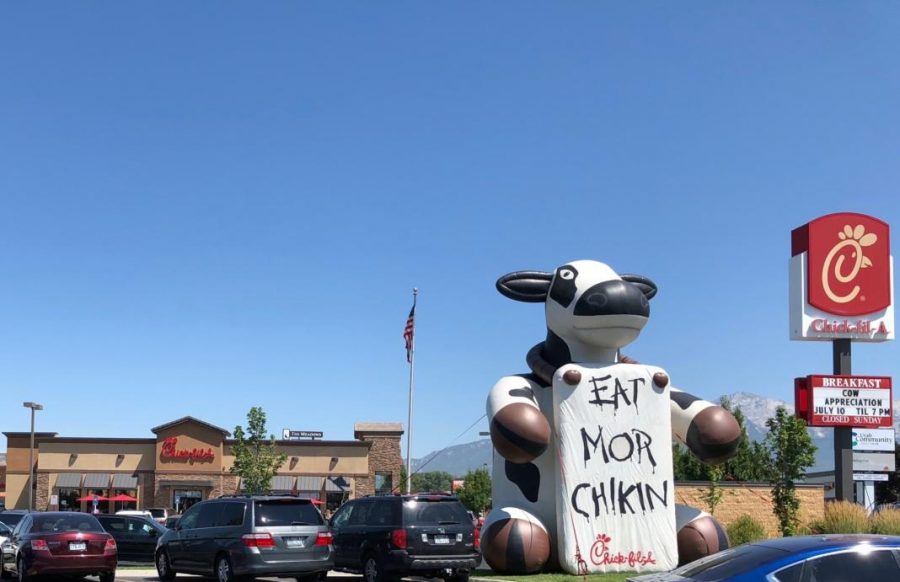 Every July 10th since 2004, thousands of people put on polka dot patterned jumpsuits, don homemade cow ears and congregate at their nearest Chick-fil-A restaurant to get a free meal at any of the 2,200 plus participating franchise stores across America. The reason for the celebration? “Cow Appreciation Day.” The origins of this marketing campaign are documented in Adweek’s Untold Story of Chick-fil-A’s Cow Campaign, which goes into detail about the development of Cow Appreciation Day. Adweek’s article details that in 1995, the Richards Group advertising agency was approached by Chick-fil-A and were asked to create a novel campaign to set them apart from other fast food competitors. The agency came back with the “Eat Mor Chikin” slogan, a concept centered around the idea that, “Cows don’t want people to eat them.” Adweek’s article introduces Rob VanGorden, who advertised Chick-fil-A as a client for many years. He explained to Adweek, “There is something uniquely human about self-preservation. It’s innate, the desire to preserve oneself … They want to keep on living, grazing and enjoying their cow lives. So why not use cows to tell the brand’s story?” That’s exactly what The Richards Group set off to do. First they designed three-dimensional billboard advertisements with cows painting “pro-cow rights” graffiti messages. The campaign became viral. Over the years, the problematic image of cows begging people to eat more chicken has evolved into Chick-fil-A’s brand.

Abstracted away from the consumer in Chick-fil-A’s naively innocent ad campaign message is an industry dedicated to producing animal-based products as efficiently as FoxConn is at producing cell phones. As for all companies aiming to stay competitive in their market, Chick-fil-A must gravitate towards peak operational efficiency (to earn the highest gross margin on a product, manufacturing must be at its lowest cost). This means optimizing production, innovating with new technologies, scaling infrastructure and sometimes cutting corners. Often controversy is leveled against corporations who get caught in optimizing their businesses too well, and this is especially true in the factory farming industry which is consistently called out for its detrimental environmental waste output, abusively poor spatial and sanitary conditions for farm animals and treatment of its workers. One could argue that industrial farming firms are only doing what the market demands of them — to always push towards efficiency. Factoring in ethical policies would put any particular industrial scale farmer in an noncompetitive position and make them unable to compete. Though optimizing production usually benefits the consumers and the market, recent discoveries from animal behavior sciences show strong evidence that the main products of industrial farming are self-aware, equipped with the ability to experience and interpret pain and able to express emotions. An industrial scale market for animal products becomes extremely problematic.

Animal meat is currently produced just like any manufactured good, meaning that the consumer only sees the finished product (especially if your state bans undercover filming of farm factories via Ag-Gag laws). In the case of Chick-fil-A, that finished product is a crispy golden brown chicken breast served with a fistful of uniformly salted waffle fries. But behind the finished product most associate with eating meat is a chaotic consumer perception of animal farming, animal rights and an asymmetrical desire by consumers to be ethical while still eating animal products. A survey conducted by The Center for Food Integrity found that only 25% of those surveyed believe that U.S. meat is derived from humanely treated animals while 95% strongly or moderately agreed with the statement, “If farm animals are treated decently and humanely, I have no problem consuming meat, milk, and eggs.” This indicates a resounding desire by consumers to maintain a more ethical diet. Another survey conducted in 2015 by Consumer Reports National Research Center found that on the issue of “better living conditions for farm animals”, consumers responded by saying the issue was very important (52%) or important (32%) to them (which was a 12% increase in importance from 2014 to 2015). With a strong desire for ethically produced animal products, why are the majority of consumers apathetic towards the cause of animal welfare in their buying habits? Not much research can be done to explain consumer apathy. Maybe it’s because we still hold a unrealistic and nostalgic view of the farmer, or that meat is too culturally important to be sacrificed for the abstract ideological concept of rights for animals, or perhaps ultimately consumers feel powerless in the matter (especially if they are economically disadvantaged to begin with).

A day of celebrating the consumption of industrially sourced meat and satirically dressing like cows forever struggling for their rights seems strange to me considering the context. Stranger still is the fact that I just finished off a Chick-fil-A sandwich myself. Even having read through the scientific findings that provide authentic evidence that many farm animals are self-aware, cognizant and socially intelligent, for some reason I just can’t motivate myself enough to make the change to a plant-based diet or a more ethical animal-based diet. It’s easy to participate in morally opaque activities when everywhere you look — from your friends, family, coworkers and the media — it seems like no one in the majority seems to care about the problematic issue of factory farming. The “Eat Mor Chikin” campaign dances around the uncomfortable moral quagmire that has become more apparent in modern times, that we apply high-level ethics to some animals such as dogs and cats but are sadistically contradictory in the way we industrially brutalize farm animals with minuscule genetic differences and common evolutionary ancestry. This is a showcase in our conflicting perception of animal welfare.