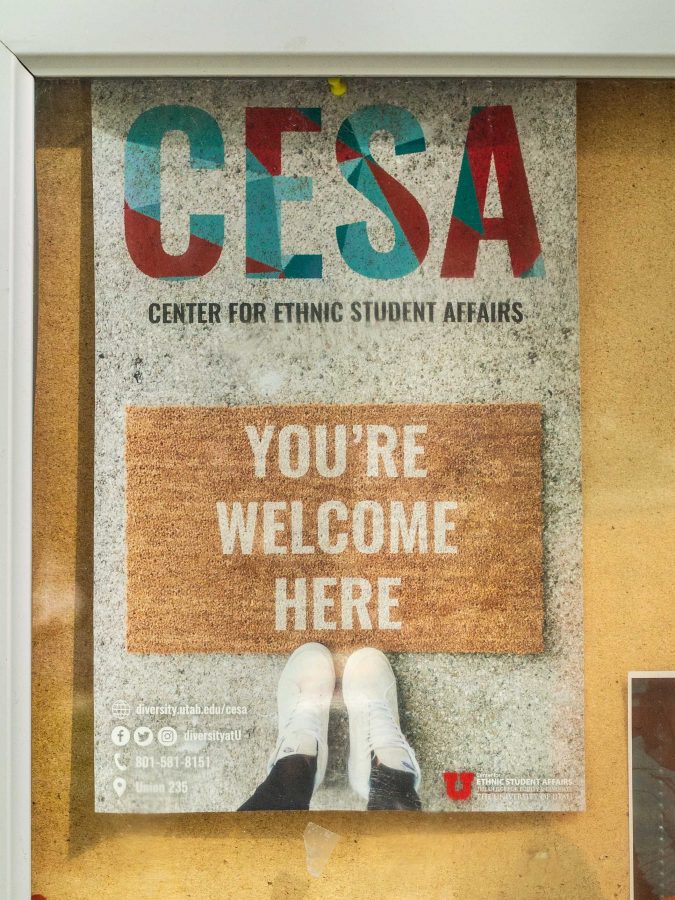 Signs from the __ welcome students. (Photo by: Justin Prather | The Utah Chronicle).

As Americans, we lead privileged lives. Our constitution includes valuable freedoms that we exercise on a daily basis, and our justice system is meant to impartially guarantee that these freedoms are not infringed upon. Our military provides us with peace-of-mind from threats both foreign and domestic. An abundant wealth of resources and entrepreneurial prowess on the international stage have helped the United States to reach the top-ranking GDP in the world — above each of the nations in the European Union combined. Home of Hollywood and the Warner Music Group, one 1 of 3 major record labels worldwide, our entertainment industry is the envy of the world. As a result, creature comforts and commodities abound in America. These comforts are utilized by many in near reckless disregard. It follows that with being an American comes a certain level of pride. Being “proud to be an American” is the default mindset of citizens and any suggestion of an alternative stance borders on heresy.

Patriotism is ingrained in our hearts and minds during our formative years. 5 and 6-year-old kindergartners arrive to their first day in American schools — still barely able to write their own names with their favorite crayons — only to be confronted with an oath to their God and country that must be recited every morning. With their hands over their hearts and an unrelenting longing to be released for recess, children spout their pledge of allegiance to the flag that they are told they must revere and a country that they have no understanding of yet.

At this point, the notion of patriotism surely holds no bearing in childrens’ minds. For many, merely going through the motions of patriotism is a habit that survives into adulthood. While this performance of patriotism seems to fulfill society’s expectations of loyalty to the U.S., a consideration of why we are proud of our country, and especially how we ought to be proud, must be considered.

Often, a conversation about patriotism cannot be had without mention of the military, or more specifically, those men and women who sacrifice everything to protect our way of life. Regardless of political position or intentions, respect for mankind’s suffering and loss must always be given priority. While many forms of patriotism can be misplaced, reverence for the selfless service of our military must always be held in high regard.

There are signs that other facets of our patriotic habits have evolved into dangerous trends that are difficult to escape. Bumper stickers that adorn the backsides of lifted diesels and family caravans that petition immigrants to hastily leave “my country” illustrate one misstep that can be ascribed to a mutant form of patriotic thought. It’s hard to pin down exactly where this line of bigoted and wholly perverse isolationist thinking morphed from one’s pride in their nation to xenophobic nationalism. It’s hard to ignore the likely root: an overabundance of citizens’ national loyalty and a general misunderstanding of what it means to be a true patriot.

Xenophobia draws attention to individuals’ countries of origin and sets up expectations as to how one’s birthplace or cultural traditions might define their work ethic, intelligence and fitness to perform as “real” Americans. This is a trend that plagues the minds of even the most well-intended patriots. While U.S. law states that foreign nationals are not permitted to be elected for President of the United States, the “birther” fiasco that took place before and after Barack Obama’s election stunk of intolerance in a way that legal hard-lining doesn’t remotely approach.

It is our responsibility to ourselves and to those who continue to (despite the current hostile political climate) transition to this country that we continue our all but forgotten tradition of America’s strength through diversity. To reject this undertaking and excuse xenophobia through an ignorant misunderstanding and increasingly militant form of patriotism, is not only un-American but inhumane.