If You Like Rock Music, Stop Listening to Men 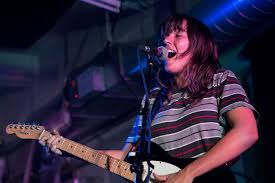 If you are a fan of rock music, there has been plenty to be depressed about in the past five years. Rock music gets little Top 40 airplay, and it gets even less traction on streaming services, while hip-hop often receives the lion’s share of critical attention. Plenty of articles have declared the genre’s imminent death. The Billboard Rock Songs top ten chart on Sept. 22 includes three Imagine Dragons songs, a cover of Toto’s “Africa,” two bands I’ve never heard of and several pop songs in disguise. The situation is bleak.

However, rock’s commercial downfall has hidden its newest renaissance. In an era of ever-waning cultural impact, female rock musicians have become the genre’s leaders. There are dozens of female musicians making excellent rock music, each with sizable though not enormous fan bases. In some ways, this has been to everyone’s benefit — no artist has been anointed as “the next big thing,” and these musicians are still almost community secrets, playing in their own corner of the rock and roll sandbox. Currently, there is at least one excellent female rock band covering every style and subject matter imaginable. The 1970s-inspired blues-rock of Sheer Mag is different from the artsy freakouts of St. Vincent. The confessional whispers of Phoebe Bridgers contrast with the brooding post-punk of Savages. Nonetheless, I am happy that they all exist.

The current slate of women in rock music is an embarrassment of riches. Both Wye Oak’s Jenn Wasner and St. Vincent’s Annie Clark have legitimate claims to the title of best guitarist alive — even if their recent songs have shied away from straightforward guitar rock. Courtney Barnett’s lyrics are so lovely that she should consider a second career as a short story writer. Meanwhile, Sheer Mag’s Tina Halladay and Alabama Shakes’ Brittany Howard could go toe-to-toe with powerhouse vocalists from any genre.

It would be reductive to categorize these musicians into any sort of singular category — as Lindsay Zoladz pointed out in The Ringer, it’s dangerous to ever classify “female” as a genre. There have always been women making great music and earning passionate fan bases. Still, the recent explosion in visibility and quantity of these artists feels like a legitimate movement, sharing similar themes. It is dismissive, and possibly misogynistic, to treat songs that are written by women as diary entries, but it is true that these artists are often successful in sharing deeply personal and painfully honest work. Female-led bands are currently making more urgent and emotionally compelling music than male-led bands. They favor directness and honesty while their male counterparts are caught in impenetrable experiments. (No shade to Radiohead, but also a little bit of shade to Radiohead). The Pitchfork darlings of the 2000s have mostly flopped in the 2010s — it’s been years since I cared about a Jack White album, but this past summer, every new Mitski single was appointment listening.

Even among the crop of great artists working in rock music today, Mitski stands out as a special talent. Her latest album “Be the Cowboy,” is the best of her already illustrious career. Mitski’s sparse, emotionally naked songs reach perfect catharsis in three minutes or less, as she deftly blurs the lines between vulnerability and rage. The critic Jon Caramanica described her earlier album “Puberty 2” as a “punk album on which meditation meets slashing and burning.” Her music, which often ruminates on unrequited longing, has won over a devoted queer fan base — to quote one hilarious tweet:

the B in LGBT stands for Be the cowboy

In the past few years, many music fans have rightly reconsidered who is actually carrying on the legacy of punk rock. One viral tweet argued the Dixie Chicks’ political activism made them “more punk than any band of straight men.”

The Dixie Chicks’ bold declaration of their anti-war beliefs to an audience of ultra-conservative country fans, and refusal to apologize or back down in spite of death threats and plummeting sales makes them more punk than any band of straight men. In this essay I will

The tweet is likely a joke, but it contains a kernel of truth. Rebelling against a system requires a certain amount of privilege, but the recent wave of female rock shows that those most affected by politics tend to make the best political art. The most interesting music of the past ten years in any genre has been made by artists who are female, queer or of color. This is not coincidental. Much of the music mentioned in this article addresses gender politics in both overt and subtle ways. Many of my favorite songs do not make direct statements but still remain political. Lucy Dacus’ “I Don’t Wanna Be Funny Anymore” is about building a new identity when acceptable roles for women are strictly limited. Waxahatchee’s “Never Been Wrong” details an argument with an overconfident man who has no experience with rejection. Mitski’s “Your Best American Girl” finds heartbreak in the loneliness of cultural divides. All of these songs put political issues in personal terms. Their narratives are both deeply felt and widely relatable.

Even when this music gets directly political, many of the best artists still retain a sense of humor. Soccer Mommy’s “Your Dog” opens with the blistering opening lines, “I don’t want to be your f**king dog / That you drag around.” Courtney Barnett’s droll one-liners have made me laugh out loud. And Mitski might have my favorite album title of all time — “Retired from Sad, New Career in Business.” Many great rock songs give their audiences permission to scream. But in breaking down barriers and fighting sexism, many artists know that if you don’t laugh, you’ll cry.

We made a Spotify playlist with some great rock songs by female artists. Check it out here.