The Purpose of the Plaques 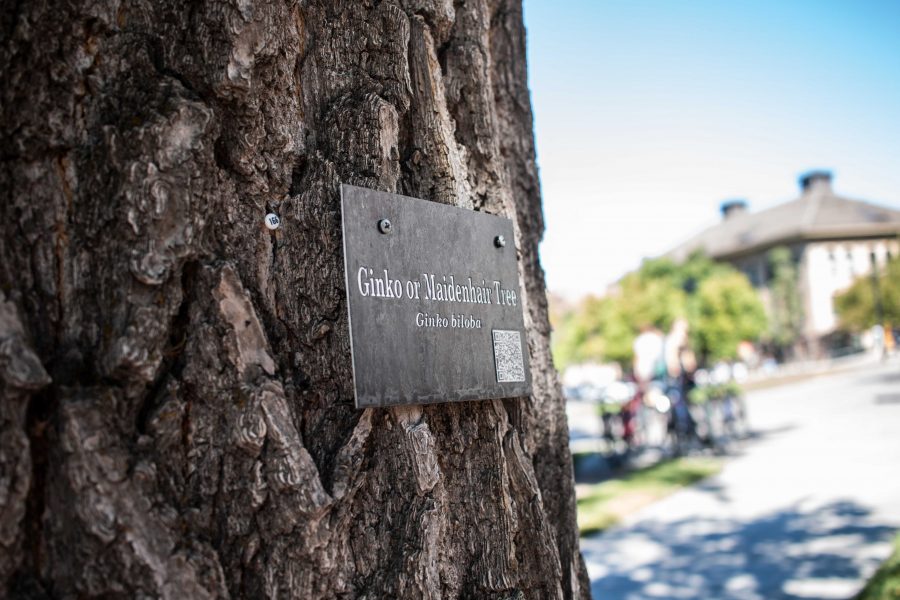 As students wander the University of Utah campus, leaves crunch beneath their feet. Above hangs a canopy of leaves. Among the variety of trees scattered throughout the U, a few of them stand out. One of each species of tree wears a label across its trunk. One can easily miss these little plaques, but if you know what to look for, you can find them among the university’s 12,000 trees.

The signs stand for an accolade that most students are unaware of. The U’s tree population and the history that it holds is as rich as the history of the university itself. The 12,000 trees sprinkled around campus including 13 “Big Trees”, the U campus and Red Butte Garden and Arboretum make up part of the Utah State Arboretum.

One of the most unknown recognitions that the U holds is the National Champion title for “Big Trees,” as maintained by American Forests, a United States nonprofit conservation organization. The bigger the tree, the closer it is to earning the recognition from the nonprofit.

Aside from size, the species of trees is also taken into consideration for the rewarding of the title. The largest tree of each species in the country receives the National Champion title. Currently, the state of Utah holds eleven National Champion recognitions. The most recent title was awarded to the U in 2014.

To encourage community involvement when it comes to the trees on campus and throughout the arboretum, the U has a campus tree committee. Through the committee, volunteers are able to contribute and engage in research, tree planting, maintenance, gaining knowledge of how to care for trees and why they hold such importance.

The U’s sustainability office has a guide to “Tree Installation and Establishment”. The guide walks through how to properly evaluate a tree planting site. Before planting, it is important to analyze soil, check for drainage and examine for root space as well as overhead clearance. Written to help students in their sustainability efforts, the guide also goes over common mistakes such as planting a tree in a hole that is too deep.

While the U is known nationwide for the extensive amount of various types of research conducted here, one man, Walter Cottam, contributed his fair share in designating the campus’ landscape as the State Arboretum.

Some of Cottam’s research includes an extensive study of oak hybridization. Cottam’s exposure to nature started early on as he grew up working on his father’s farm. The Brigham Young University graduate came to the U in 1931. After teaching at the U for 31 years, Cottam retired to continue working on his hybridized oak project.

One of his most noted works is his 1947 essay, “Is Utah Sahara Bound?” from The University of Utah Bulletin. It goes through comparing methods of collecting and analyzing data and the diversity of Utah’s vegetation. This topic not too far off from some of the research being done today.

U biology professor, Diane Pataki, and former postdoctoral scholar, Meghan Avolio, took a survey of the diversity of trees in Salt Lake Valley. The survey was then published in Ecological Monographs entitled, “Biodiverse cities: the nursery industry, homeowners, and neighborhood differences drive urban tree composition.” The pair found that diversity in Utah’s trees came with diversity in its tree nurseries.

“I’m skeptical of the idea that the best way to achieve sustainability goals in urban landscaping is by planting native species,” Pataki told @theU in April 2018. “That’s way too narrow of an approach. The urban forest is quite diverse and more diverse than the trees that were here before. In fact, the native landscape was almost treeless and that’s not what most people want for the city.”

Walter Cottam planted multiple Sequoia trees on either side of the Pine Valley Mountain, co-founded The Nature Conservancy and served as chairman of the Botany Department at the U. As a result of his accomplishments and extensive work, the Utah State Legislature recognized Cottam in instructing for the arboretum to be used for research and preserving the land.

When the university’s tree committee was formed in the spring of 2014, they followed in Cottam’s footsteps. Their work consists of the community involvement that they bring in, and the efforts that they make to take care of the campus’ trees.

“I’m proud that the University of Utah has joined campuses across Utah and the U.S. to celebrate our urban forests,” said Elise Gatti, chairperson of the U of U Campus Tree Committee, to Sustainable Utah in 2015. “It’s a great opportunity to engage student learning and research that focuses on the many benefits of trees, as well as their needs.”

Providing resources for the tree committee and the foundation for their accomplishments is Tree Campus USA. Campuses around the U.S. participate in the Tree Campus USA program where students and faculty can learn more about the importance of taking proper care of their campus and their environment.

Tree Campus USA hosts service projects and emphasizes the importance of Arbor Day on campuses. The group encourages the value of nature and the collegiate committees take the information with them to educate their communities. The U’s Tree Committee received the Tree Campus USA recognition in 2014.

The U’s Red Butte Garden and Arboretum holds a high ranking, placed among the 50 Most Beautiful College Arboretums according to Best College Reviews.

Best College Reviews said, “’To connect people with plants and the beauty of living landscapes.’ This simple yet profound goal is the mission of the Red Butte Garden located in the foothills on the eastern edge of the University of Utah. These 100 acres of hiking trails, plant collections, and display gardens also serve as the official arboretum of the state of Utah and is the largest botanical garden in the Intermountain West.”

The Walter P. Cottam Visitors Center is also located at Red Butte Garden. The center was funded by the George S. and Dolores Dore Eccles Foundation in memory of the man whose love of nature brought trees into the lives of countless students. The center was completed in 1994 by architect and fellow of the American Institute of Architects, James Walker Christopher.

While the U holds numerous tours of their campus, many are unaware that one of the campus tours offered is a tree tour. The trees’ plaques feature their names and codes that are available to scan with a smartphone to gain further information on the tree and its species. For those who do not want to walk around campus, an online tour is provided to view 92 featured trees.

The sustainability website also provides tips and information on how to plant, establish and prune a tree. This can also be found at https://sustainability.utah.edu/engagement/student-groups/u-of-u-tree-campus-usa/