Braden: Find an Appetite for Truth 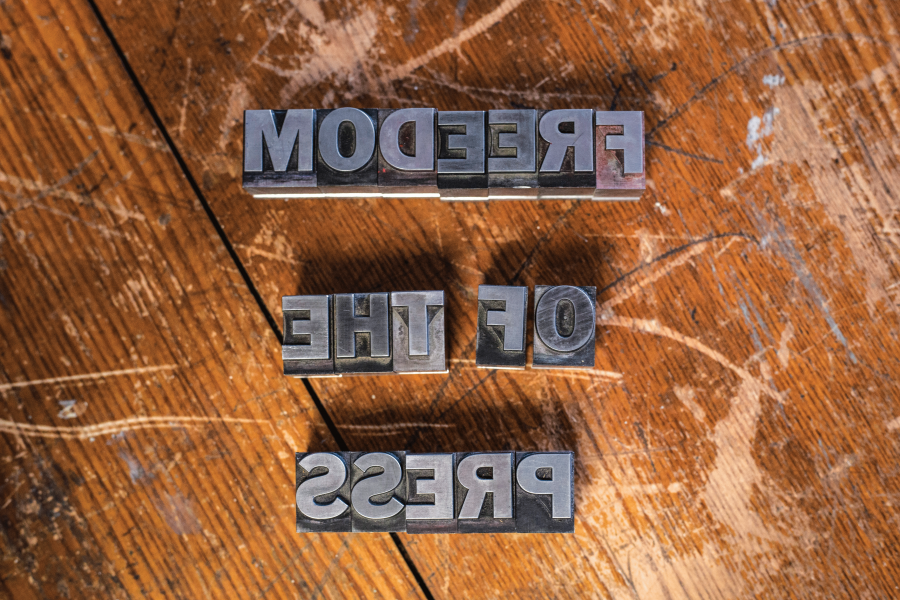 The era of fake news has long been upon us. Almost every media outlet that we encounter, such as newspapers, magazines and national news stations, conspires to elevate one communal goal: to delude, defraud and dilute factual truth in hopes of filling the heads of the hopeless with well-manicured versions of the day’s events. As society’s grip on reality grows weaker, the tight and manipulative hold of media moguls and their flunky journalists are bolstered toward total and complete control of our personal perceptions. Do they produce authentic news coverage? Hardly. Rather, the “breaking” stories that crowd airwaves are strewn with scripts of distorted factoids carefully calculated by their perverse proprietors.

News consumers have transitioned from critical to cynical and, along the way, devalued the practice of following sources to determine their legitimacy. Why bother evaluating source material if the sources themselves must also be in on the ruse? Regretfully, today’s narrative of paranoia only amounts to ignorant lunacy for a portion of the voting population. Among us walks a significant and unequivocally convinced measure of people who espouse what the rest of the country struggles to recognize as a serious value — judgment.

As we live among tinfoil-hat-donning soldiers of an imaginary apocalypse, many wonder how this state of extreme paranoia has festered into the perceptions of the otherwise functional.

Those who struggle to understand the phenomenon, which can best be described as an epidemic of blanket disbelief concerning matters of actuality, might easily dismiss its proponents as the patrons of a passing phase. This mindset must not be the decision of those who are invested in the well-being of our country. One must take action to ensure civil discourse, even if that means facing an exhausting exercise aimed to convince disbelievers of the media’s hand waving in front of their face.

The ability to empathize with others is well regarded as one of the most effective tactics that one can use to reach factual understandings. In the case of a thirsty horse who can’t be bothered to drink the water that he’s led to, an exercise in empathy sometimes becomes all but impossible. This is a task in futility — one that instills a compounded dose of distrust in the minds of anyone that we seek to direct towards sensibility.

Those who are in favor of sustaining blatant distrust provide fuel to the misguided fire that warms the hearts of their own disenfranchised base. Such people make blanket statements that regard the field of journalism as dishonest by nature and suggest that the only solution to the media’s suggested abuse of truth is that they must show a complete disregard for the content that they produce. While accusations of deliberate deceit vary between individual targets and the character-damaging intensity that they intend to diminish, the backbone of spineless arguments remains the same: bias.

Bias is inescapable. Every sentient being who is capable of holding any conviction is subject to it. According to Peter Watkins, a University of Utah communications professor and former Bush administration staffer, bias in the media should be viewed through three considerations of practice: what content is chosen by an organization to cover, the overarching tone of the coverage itself and the amount of coverage that an outlet gives to a particular topic.

Watkins’ instructions provide a great framework for initiating one’s quest to weed-out bias when consuming news media, but they also contain the potential to reaffirm any existing biases among investigative readers. In an effort to illustrate one of these points and to provide examples of bias-exposing trends, Professor Watkins highlighted the home page of three different news websites during one of his most recent lectures. One recurring tendency that all three media outlets Watkins sampled seemed to be guilty of was their high saturation of repeated topics. Stories with similar headlines and subject photos crowded the front pages in what many members of Watkins’ course agreed to be an attempt to shamelessly drive their respective angles home — all with an apparent disregard for their glaring partisan tilts.

Several potential dangers might arise from using Watkins’ suggested methods to determine the presence of bias in a piece of news. How these methods and the bias they uncover might force a reader to prematurely disregard the importance or presence of fact-based findings within content is the most important thing.

One of the media organizations that draws public attention to this tactic of biasing news is The New York Times. A quick scroll through their home page shows more than just a few articles whose main focuses are upon the Supreme Court nominee, Brett Kavanaugh, and the recent hurdles upsetting his confirmation. While Watkins pointed out that even though the NYT appears to have a near obsession with the scandals that surround highly publicized accusations, this instance was, after all, a major national issue worthy of such attention. Other readers might not be as democratic in their assessment of the newspaper’s choice. Repeated illustrations that focus on unsavory circumstances, regardless of any evidence-based claims contained within a piece, can understandably sit sour with a viewer who chose to root for any individual or group being criticized. More importantly, while the motion to clog airwaves and columns with a lens on the same negative gaff, failed policy, et cetera, might point to a bias at a particular organization, the existence of this bias does not necessarily negate the validity of a story covered. As W. Clement Stone once said; “Truth will always be truth, regardless of lack of understanding, disbelief or ignorance.”

As much of a misstep that a clearly bent tone can often provide to an unprofessional precedent for news reporting, the appearance of such a bias also has no bearing on the claims made throughout any article that it is observed in. With the exception of op-ed journalism, most respected publications make concerted efforts to avoid promoting the individual political ideologies of their writers and readers inasmuch as the effort might cause the factual alteration of the initial findings of a reporter. Just like with the topical choices, a particular publication can choose to cover highlighted inclinations. Tone can also offer insight regarding staff bias. Similar to content choice and the frequency thereof, turning over stones that reveal an outlet’s inherent bias should not be considered a means to dismiss an article as not factual.

The President of the United States has nearly trademarked citizens’ widespread distrust of the media via comments that urge them to not believe anything seen and heard from the news media because “it’s not what’s happening.” It seems that convincing voters to continue reading newspapers, let alone instill in them the ability to separate bias from content, is a nearly impossible task.

Many have taken notice of this national issue, including California governor Jerry Brown. Concerned that today’s youth struggle to differentiate between blatantly fraudulent online stories, and the legitimate news sites, Brown recently signed a law that will make media literacy courses available to junior high and high school students. His aim is to provide the tools necessary for Californian students to determine what is news, and what is not. Hopefully, tomorrow’s youth will not only be reinvigorated with a desire to unearth truth, but they’ll realize the importance of a free press and the value that it gives to a democracy.