Banned Books are Not History 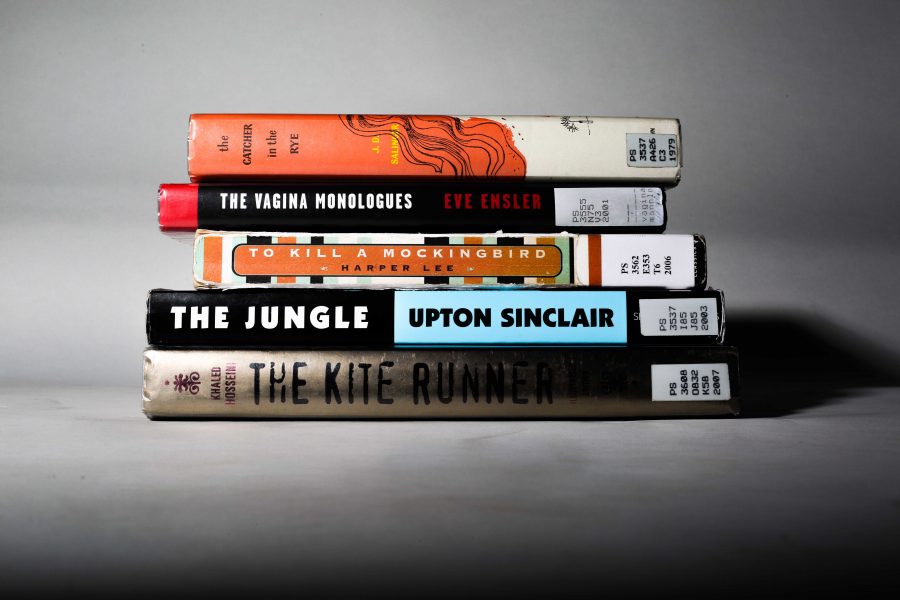 A stack of formerly banned books available at the Marriott Library. (Photo by: Justin Prather | The Utah Chronicle).

The days of banned and challenged books are not over. This is the message the University of Utah’s J. Willard Marriott Library is trying to share. In honor of Banned Books Week, the library hosted a Banned Books Open Reading to spread awareness.

The Banned Books Open Reading gave students, staff, faculty and anyone else from the community a chance to read from a book that has been banned or challenged at any point in time. The library provided multiple shelves of books to choose from but also allowed people to bring their own. An event filled with profanity and cookies shaped like books proved to be so interesting that the library had to bring in more chairs for the people who decided to join in while walking by.

“People are often surprised because they think that we are talking about something that happened 20, 30, 50 years ago. We are talking about things that are happening today,” said J. Willard Marriott Library Dean and Director, Alberta Comer.

Since coming to the U, five years ago, Comer annually stands at a podium and reads the American Library Association’s (ALA) “The Freedom to Read Statement.”

“We believe that free communication is essential to the preservation of a free society and a creative culture,” reads the statement.

The statement, first issued in May of 1953, was adopted by the ALA the next month. The document outlines seven rights that are “in the public interest.”

The rights include publishers and librarians to provide a wide diversity in material, remain unbiased in the selection of material, and not to bar works because of who the writer is. Publishers and librarians must not try to persuade others to only read what they deem suitable or force anyone to accept anything. Libraries and publishers are also expected to defend these rights and promote thought and expression.

“The freedom to read is guaranteed by the Constitution. Those with faith in free people will stand firm on these constitutional guarantees of essential rights and will exercise the responsibilities that accompany these rights,” said the statement.

Comer sees books as an escape, one that no one should be denied.

“I grew up on a farm in Oklahoma, way out in the country. And my way of escaping was through books, and so I am very passionate that other people are allowed that same escape mechanism that I had to find what else is in the world besides the place we happen to be,” Comer said.

When reflecting on the banning of books, Comer looked back to when her daughter was in middle school. Comer was asked to be on a committee to decide if a certain book was “of concern.” The now Dean and Director of the library advocated for the book and students were able to read freely.

“I think it is very important that we talk about books that have been banned or have been censored, or that people have tried to ban or censor books in the past because they still do it,” said Comer.

There are records of books being banned and even burned as early as 259 B.C. Even as recently as 2017, the ALA Office for Intellectual Freedom logged the banning and challenging of 416 books across America.

“There are people across the nation, individuals and groups, that for one reason or another feel that a particular book is dangerous or offensive or immoral,” said Marriott Library Marketing and Public Relations Director, Heidi Brett.

The most common reasons, according to ALA, are offensive language, sexual content and being unsuitable for the age group. Other common complaints are violence, homosexuality, religion, satanism, communism, nudity, racism, substances and anything that can be described as an attack on the family unit.

“Thirteen Reasons Why” topped the list of the top 10 most challenged books list for 2017 for discussing suicide. “The Absolutely True Diary of a Part-Time Indian” followed for including an LGBT character. “The Kite Runner” includes sexual violence and was argued to “lead to terrorism” and “promote Islam.” “George” has a transgender child, “Sex is a Funny Word” addresses sex education. “To Kill a Mockingbird” has violence and curse words. “The Hate U Give” has been deemed “vulgar” and contains drug use. “And Tango Makes Three” features same-sex relationship and “I Am Jazz” has been challenged for addressing gender identity.

“Seeing what books are banned each year is always a surprise and a little sad,” said Marriott Library marketing and public relations assistant, Jordan Hanzon.

The J. Willard Marriott Library strives to be a home to published works of all types, even ones that hold ideals those working for the library do not hold.

“We feel as librarians and those of us who work in libraries, whether it’s academic or public, that it’s very important to keep all materials open. This would include books that perhaps most of us are not comfortable with. If there were a book that was pro-Nazi, and it’s published, we would have it in our library. Whether we felt like it was a good healthy thing or not,” Brett said.

Some of the books students chose to read from were “King and King,” “120 Days of Sodom” and “The Catcher in the Rye.”

Some censorship is self-inflicted. One of the readers shared his own story before reading “The Catcher in the Rye” to the group.

“I have an interesting history with [“The Catcher in the Rye”] since the first time I read it was in high school, and I came from a conservative religious family, and do you know what I did? I blanked out every swear word in my high school copy of this book. I still have this copy. I can’t throw it away because now, looking at it, I think it’s so funny,” said U student Steven Meyers, who is pursuing his second bachelor’s degree.

Meyers shared that now he sees his high school copy as a sign of his growth over the years and appreciated the chance to share that with the community.

Between readings, library staff shared facts about or related to the books being read. For example, “The Catcher in the Rye” was the most censored book in high school libraries in the United States from 1961 to 1982.

“I think it’s a core element of a free and open society to basically not tolerate censorship because when we decide to make things unavailable we start limiting what freedoms people have. In this country people have freedom of speech, freedom of religion and intellectual freedom as well,” Brett said.

If society is allowed to limit freedoms when it comes to reading, Hanzon asks, what’s next?

The J. Willard Marriott Library ensures that they have a vast collection of famously banned books and invites everyone to read one. Some of the books available include “Looking for Alaska,” “Fifty Shades of Grey,” “I am Jazz,” “Beyond Magenta: Transgender Teens Speak Out,” “The Curious Incident of the Dog in the Night-Time,” “The Holy Bible,” “Fun Home,” “Habibi,” “Nasreen’s Secret School: A True Story from Afghanistan,” “Two Boys Kissing” and the list goes on.

“It’s really important that we think [about banned books] not only one day or one week a year, that we think about it year in and year out, day in and day out,” Comer said.