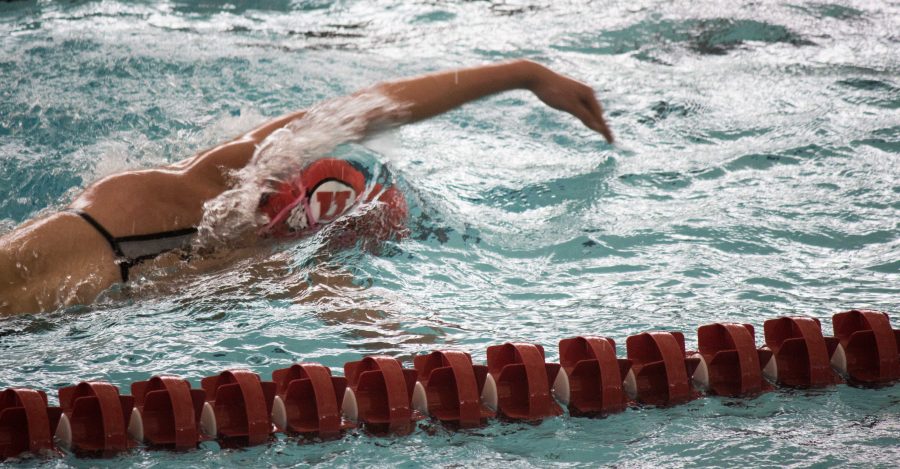 The University of Utah’s women’s swimming team fought hard in their home meet against No. 11 USC, but came up short, losing 142-120.

“I’m really proud of the girls today,” said head coach Joe Dykstra. “We swam well. We had a really tough week of training. We are missing a few people today out with the injury and illness, but girls stepped up and raised hard today. I thought the attitude, the effort, and the fight was really really good. I’m proud because we were a few tenths-of-a-second here and a few tenths-of-a-second there away from actually winning this meet.”

“My strategy was to go out as hard as I can and hold on because I need to feel that this is really tough, so just to hold on as hard as I can and try to win it for the team,” Fernandes said. “It was really a hard line-up for me. It was my first time doing back-to-back races. But I was really happy knowing that the hard work is going to put into practices paying off.” Fernandes also placed second in the 100-meter fly and 200-meter IM with 55.25 and 2:05.36.

Freshman Audrey Reimer showed her potential in the backstroke, winning both the 100 and 200-meter races with times of 56.52 and 2:01.78, respectively.

“I thought that all the work that I’ve put in in the past couple months was really influential and helpful,” Reimer said. “I set my tempo early for the first twenty-five and then let it go out until the last seventy-five.”

“Not even just swimming it but the time in general, I think it’s good that that’s where I am right now at the season and after these weeks of training, I was happy with my time,” Robertson said. She added with a positive voice by saying, “Building off what we have done this week would be awesome if we can go the same times we did today. As a team, I think it could be UCLA and personally want to be where I am or even faster than that.”

Senior captain Darby Wayner swam the second fastest in the 100 breaststrokes with a time of 1:03.46.

“I’m really encouraged by what I saw today. I am excited to take it forward next week. The big goal for next week is a win” Dykstra said.

Next meet, the team matches up against UCLA next Saturday at 11 A.M. The meet will be held in the Don Reddish Pool at Ute Natatorium.