‘Light of Lauren’: U Gathers to Remember Slain Student and Athlete 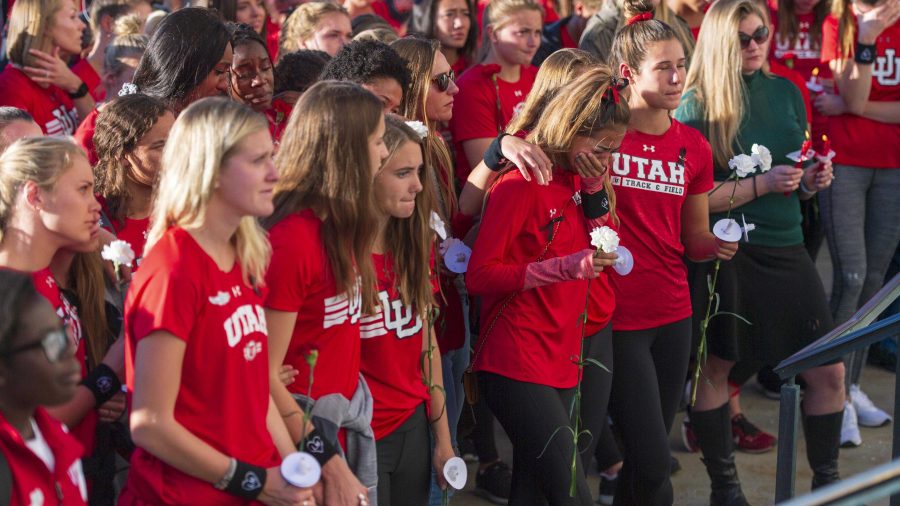 The Utah women's track and field team, students, staff, family and friends attend a vigil on the steps of the Park Building for Lauren McCluskey who was tragically killed on campus at The University of Utah in Salt Lake City, Utah on Wednesday, Oct. 24, 2018. (Photo by Kiffer Creveling | The Daily Utah Chronicle)

Two days after the tragic death of University of Utah student and track athlete Lauren McCluskey, hundreds gathered at the steps of the Park Building on the U’s campus to mourn her loss and honor her memory.

Huddling in front of the crowd, many of McCluskey’s teammates on the track and field team wept through the duration of the vigil. They each donned a black wristband with the initials “L.M.” in a heart.

“We are her ripples,” said Shannon McNatt, a gymnast and president of the Crimson Council — a student-athlete advisory committee. McNatt urged the “U family” to keep McCluskey’s legacy alive through their actions. “Start to be a better role model in the community, go the extra mile to help someone in need, be there for each other,” she said.

McCluskey was a role model beyond the track in the way she engaged with the community and achieved excellence in her studies. Kyle Kepler, McCluskey’s coach, described the pride he felt seeing her name semester after semester on the top 10 GPA board that hangs in his office.

“When you recruit a student-athlete, you try to understand them — get to know them — and when you bring them on campus you have an idea of what you want them to be — and what you think they can be — and Lauren exceeded in all of those areas,” Kepler said.

The many U athletes in attendance at the vigil, including McCluskey’s teammates, wore shirts that read, “Leave a legacy.” Athletic Director Mark Harlan explained that student-athletes received the matching apparel at a welcome back meeting in August. At the time, he told them that it was their job and responsibility to be competitive athletes, do great work in the classroom and give everything they could in the community.

“She did it,” Harlan said of McCluskey. “Now you have to leave a legacy as well and take care of each other.”

Three senior track and field teammates, Eliza Hansen, Mesa Weidle and Raynee Helm-Wheelock, held each other as they gave a tribute to their teammate’s “sweet spirit.” Shaking and holding back sobs, each took a turn speaking. When one broke down and could not continue, another would step in. Describing the moment she met McCluskey five years ago and the relationship that blossomed between them, Weidle said they were “blessed” to have Lauren as a teammate and “sister.”

Students and athletes from other schools throughout Utah were among those in the crowd to remember McCluskey and show support for her friends and family. The University of California, Los Angeles women’s soccer team, who arrived in Salt Lake City in anticipation of Thursday’s game against the U, stood in a cluster at the back of the vigil.

McCluskey was shot and killed Monday night by Melvin Rowland, with whom she had previously been involved in a relationship. Rowland was a sex offender and lied to McCluskey about his name, age and criminal record, according to her mother. The two dated for about one month when Lauren was informed of Rowland’s status as a convicted felon by a friend. She subsequently ended the relationship on Oct. 9.

At the time of the breakup, Rowland was borrowing McCluskey’s car. On Oct. 10, she requested an escort from university police to retrieve the vehicle. McCluskey reported she was being harassed to UPD on two separate occasions — Oct. 12 and 13.

McCluskey was on the phone with her mother as she walked back to her apartment from class Monday night when she began screaming, “No, no, no!” according to a statement her mother released on Twitter. McCluskey’s parents called 911 while leaving the line open on the phone call with their daughter. Her cell phone was retrieved by a female student who told them over the phone that McCluskey’s things were scattered on the ground in a parking lot near student housing.

Police responded to the incident and later found McCluskey shot to death in the backseat of a car. Campus was placed on lockdown for just over three hours.

Rowland fled the scene and was spotted by police on 600 S. just after midnight. After a pursuit on foot, he took refuge in the Trinity A.M.E. Church on 239 E. 600 S. When police arrived at the building, they heard a commotion and a gunshot in the upstairs of the church. They found Rowland dead by a self-inflicted gunshot wound.

The pastor of the A.M.E. church, Darrel Jackson, spoke to the audience at the vigil, saying he had become “interwoven with this family and with this community because of the event that happened the other night and the tragic ending — where it all ended.” Jackson went on to say that “this is a time to come together, to not let this tragic event extinguish the light of Lauren.”

McCluskey was a member of the congregation at Salt Lake City’s Capital Church. The pastor, Troy Champ, also addressed the crowd, asking them to “resist the temptation to get even” and instead to “honor Lauren’s legacy.”

Lindsey Harrison, a freshman at the U who was locked in her dorm room for two hours while police searched for Rowland, said that the scariest part of the shooting was the feeling that it was normal.

“It didn’t seem like it was real at all,” Harrison said, adding that it became more real when she learned that a student had died. Harrison said that once they heard the news of McCluskey’s death, she and her roommates began to cry. She has had a hard time sleeping since the incident and found herself crying as she went to bed Tuesday night.

“You just start thinking about what is really important. Someone actually passed away and it’s not about anything else.”