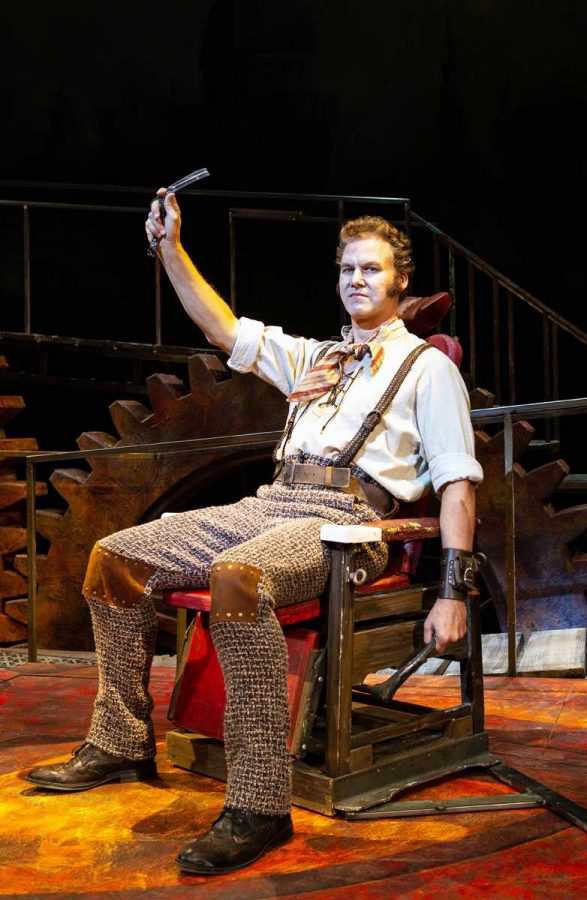 What better show to see in October than Sweeney Todd? “Sweeney Todd: The Demon Barber of Fleet Street” is currently playing at Pioneer Theatre Company, and they have definitely done this show justice. With a complex and difficult musical score, a set designer’s nightmare (people die in a chair and get dumped in a human-sized oven) and a director’s every scary whim come to life, this show is not easy to put on.

However, it is an easy sell. Sweeney Todd carries a Tony Award for Best Musical as well as an Olivier Award for Best New Musical and its many film adaptations, (you might recall one starring Johnny Depp), have brought home trophies as well. If you have seen the movie or one of the plays, go see the musical. They are not the same and Pioneer does a fantastic job with this classic show.

It all starts with an amazing set by George Maxwell. Massive gears, larger than my car, tick away the grueling task of life in 1800s London. The poor beg for alms against a smoky night sky backdrop as they traverse a series of stairs and bridges to avoid the pits of hell below — and the sewers, which smell nearly as bad. Todd’s chair is tricky in more ways than one, but the crowning jewel of furniture is the oven. Over ten feet high, it not only holds enough pies to feed an army, but it also smokes and flames lick at its base.

Careful where you lick though, Todd’s knives spill real blood — no cheap scarf imitations for this prestigious theater. And speaking of Todd’s knives, they sparkle and shimmer nearly as much as the vibrato of an exceptionally well-cast group of singers. Anne Tolpegin is the perfect Mrs. Lovett with enough grit and sass to make the darkest of shows humorous. Kevin Earley is also a masterful Todd. His appearance is not quite so terrifying, but his vocal talent more than exceeds expectations. Other standouts in the cast include James Donegan, who sings a fantastic countertenor along with another ensemble member. The ensemble held a solid balance throughout Sondheim’s unforgiving score.

Particularly impressive were the dialects. Cockney and diction are not exactly two peas in a pod, but every word was clear and the accents almost never dropped. Pioneer is lucky to have so talented a dialect coach as Sarah Shippobotham. The acting felt nearly as thorough, even through some plots holes towards the end of the play. The script leaves out a few events and the man we find on top is not the one we expected.

Is this show worth seeing? Absolutely. However, it is not for the faint of heart. There is a lot of blood, and they do pump fog into the audience pretty much the entire show. It is not recommended for children under the age of five and there is swearing. Yet the worst part of the show is, honestly, the train whistle. It is extremely loud, enough that the majority of the audience were forced to cover their ears, and it sounds multiple times. It was jarring, disruptive and I had a headache blooming by the end of the show. The worst part is the whistle is needless. It’s a divider between scenes and there are other whistles in the show at a much more reasonable pitch and volume. This one is overly loud for no apparent reason, and it ruins the moments when it is blown.

“Sweeny Todd the Demon Barber of Fleet Street” runs through Nov. 10, with shows every day except Monday, and additional matinees on Saturdays. Students can get rush tickets for $5 the hour before the show starts. For more ticket information, visit pioneertheatre.org. Need a Halloween date? This is the perfect night out with friends, a new love or even your mom. Enjoy a little gore and have a happy Halloween.