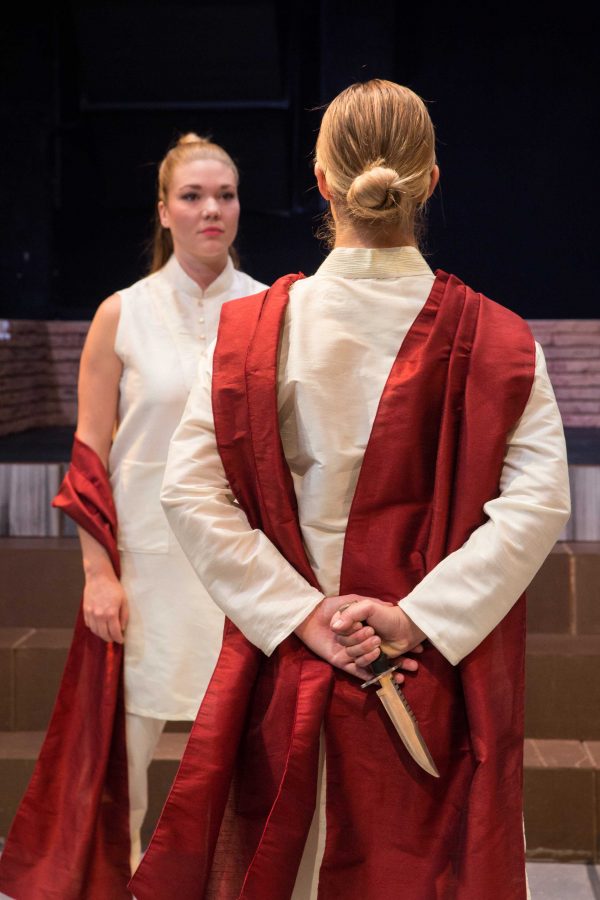 This Halloween, the University of Utah Department of Theatre is presenting a historical tale of horror and violence — William Shakespeare’s 1599 tragedy “Julius Caesar.” This oft-adapted play starts as Julius Caesar (Selah McKenna) returns triumphantly from battle, while her close friend Mary Antony (Mary-Helen Pitman) offers her the crown of Rome. The citizens of Rome revere Caesar, but the power-hungry Caius Cassius (Isabel Crews) is threatened by Caesar’s increasing ambition. She convinces Marcus Brutus (Lindsie Kongsore) to join her conspiracy to kill Caesar. Her decision leads to Caesar’s dramatic murder in the Senate, resulting in a bitter civil war which divides leaders and citizens alike.

While this version is theoretically set in an apocalyptic vision of the year 2118, director David Carey, from the Oregon Shakespeare Festival, does not fully embrace this conceit. (I would not have realized the setting change without looking at my program). Instead, the show’s casting is the most unexpected move that this mostly traditional adaptation takes, and the decision is simultaneously no big deal and definitive. Female actors play all of the principal roles, and Carey casually swaps the gender of most major characters. This change, played with a straight face, updates and subverts Shakespeare’s treatment of gender and the play’s power dynamics, imagining a world where female leadership (and brutality) is a given. Carey also spotlights actors who would not normally have many opportunities to play leading roles in Shakespeare’s canon. While larger themes lurk behind this production, the immediate conclusion is simple — more female actors should get the chance to tackle these complex parts.

Carey’s direction is spare and actor-driven. The scenic design by Cara Pomeroy and costume design by Katherine Jelte are intentionally minimalistic, and the primary focus is on the script and the performances. Luckily, the cast is uniformly excellent. The actors provide a fresh approach to these now archetypal characters. Carey brings out layers of nuance and unexpected vulnerability in every member of the ensemble, resulting in natural, thoroughly convincing performances. Some particular standouts include Kongsore, who makes for a sympathetic Brutus, the consistently compelling McKenna and Pitman, who relish some of the play’s most famous scenes. Call Vande Veegaete also makes an impression with his short appearance as Portia, husband to Marcus Brutus, in a scene that was perhaps the production’s most notable twist of gender roles.

Some minor flaws in the production occasionally distracted from the fine work of the cast and production team. The show’s pre-recorded sound effects and music were distracting and ineffective — they felt tacked-on last minute. Carey occasionally struggled to block his large cast in the small space at Studio 115, and during some key scenes, some actors impeded my view of the central action. Still, these quibbles only emphasize how much this production got right.

Unlike the now notorious Public Theatre production, this interpretation does not make explicit political references. Instead, Carey trusts that Shakespeare’s potent language can still resonate with audiences. The gambit pays off, and feels oddly refreshing — instead of falling into the trend of endless reimagining, Carey reminds audiences why Shakespeare’s work remains essential in any time period. Standing on their own, the meditations on power and patriotism of “Julius Caesar” feel sadly relevant as acts of political violence dominate the news cycle. In an iconic early scene, Caesar is warned to “beware the ides of March.” But after this tale of authoritarianism and governmental dysfunction, I left feeling more afraid of the midterms of 2018.