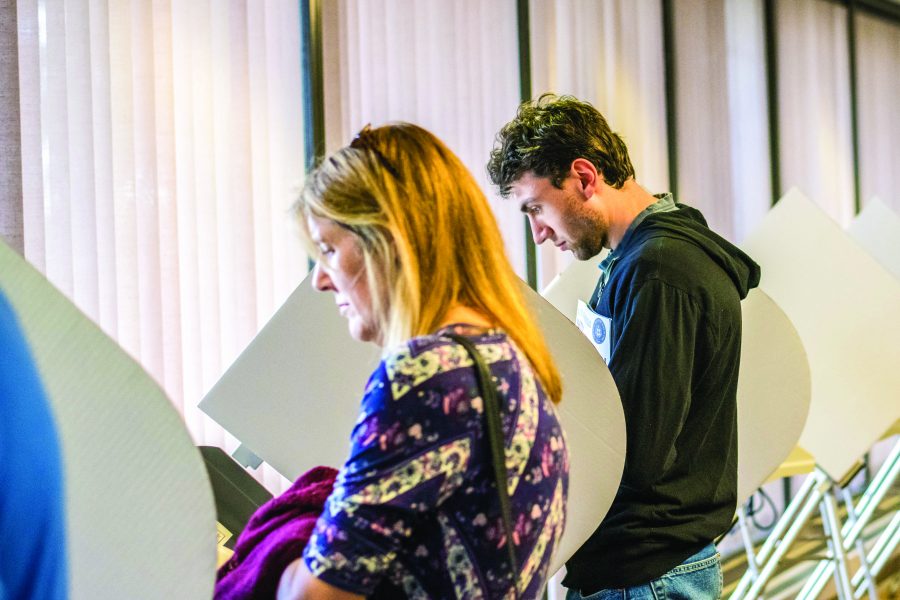 On Tuesday, Nov. 6, 2018, polls will open across the United States for the national midterm election. Every seat in the U.S. House of Representatives is up for election, as well as 35 out of the 100 seats in the U.S. Senate. On the state level, state senators and representatives, district attorneys, school board representatives, judges and others are on the ballot. This year, students, staff and community members will again be able to vote in-person on Election Day on campus.

Unable to establish a vote center on campus during the local 2017 election, the ASUU Government Relations Board worked with the Salt Lake County Clerk’s office to organize the 2018 vote center at the Gould Auditorium in the J. Willard Marriott Library, 295 S. Campus Drive.

“The Government Relations Board worked this summer to reinstate our voting center in the Gould Auditorium,” said Michaela Lemen, ASUU director of government relations. “Not only were we able to reinstate the voting center, but we were also able to more than double the amount of voting machines available to students on Election Day.”

“We hope to have all students come and have their voice heard through their vote,” said Grace Mason, an associate director of government relations. “Elections, whether they be local or federal, have a tremendous impact on our day to day lives and can be one of the best ways to make a change in our democratic system. Nationally, the 18-25 age group has the lowest rate of voter participation than any other age group – we strive to change this.”

Jason Perry, the director of the Hinckley Institute of Politics at the U, agrees that students benefit from accessible voting centers. “The polling location at the library makes it so any student, faculty, or staff member that is a resident of Salt Lake County can easily cast their ballot and even register to vote,” he said. “Despite being a critical voice, students often don’t vote because they don’t know how or where to do so. This option makes the process easier and more convenient.”

While the Government Relations Board hopes to see more than one vote center site on campus in the future, according to Salt Lake County Clerk Sherrie Swensen, vote centers were not designed to be the first stop for voters.

“The vote centers and early voting locations are meant for people who need the amenities of the electronic voting machines (if they have a visual impairment and need to use an audio ballot), if they didn’t receive a ballot or if they misplaced their ballot,” Swensen said. “Vote centers are a failsafe. We’re trying to get voters used to updating their addresses and voting by mail. Vote-by-mail is more convenient for voters, and allows them to read into the issues and candidates, and study them.”

Still, plans to have one vote center opened next year during the Salt Lake City mayoral race have not been ruled out by Swensen.

In Utah, registered voters are not required to wait until election day to cast their ballots; Utah allows voting by mail and early voting. If you are a registered voter, you should have received your ballot from the county clerk’s office between Oct. 8 and Oct. 16, 2018. These ballots must be signed and postmarked by Nov. 5 to be counted or can be dropped off at any early voting site or on Election Day at polling sites.

Utah also allows for in-person early voting, which begins 14 days before election day every election year (this year, early voting spans weekdays beginning Oct. 23  to Nov. 5). The deadline to register to vote by mail has passed (Oct. 9), and the deadline to register online or in-person is upcoming (Oct. 30). Utah law also allows for same-day registration, where voters can register and vote at the same time. Same-day registration voters will be asked for a valid form of ID and proof of residency, and then given a provisional ballot, which doubles as a voter registration form. Provisional ballots are counted and included in election results after being reviewed.

Swensen attributes the long lines that students and community members experienced at the Marriott Library’s vote center in 2016 to a mistake made by a former election director.

This election day, Swensen plans on placing 30 voting machines in the Marriott Library vote center, along with nine vote center specialists to help check voters in and speed up the lines. Voters can also cast their ballots or register to vote at any of the 43 vote centers in the county, regardless of which area they live in. The next closest vote center to the U will be at Trolley Square.

For more information about how to register to vote, where to vote or voting restrictions, visit https://slco.org/clerk/elections/voter-information/Voter-Registration/.