Honoring Those Who Serve: Craig Hanson Awarded Student Veteran of the Year 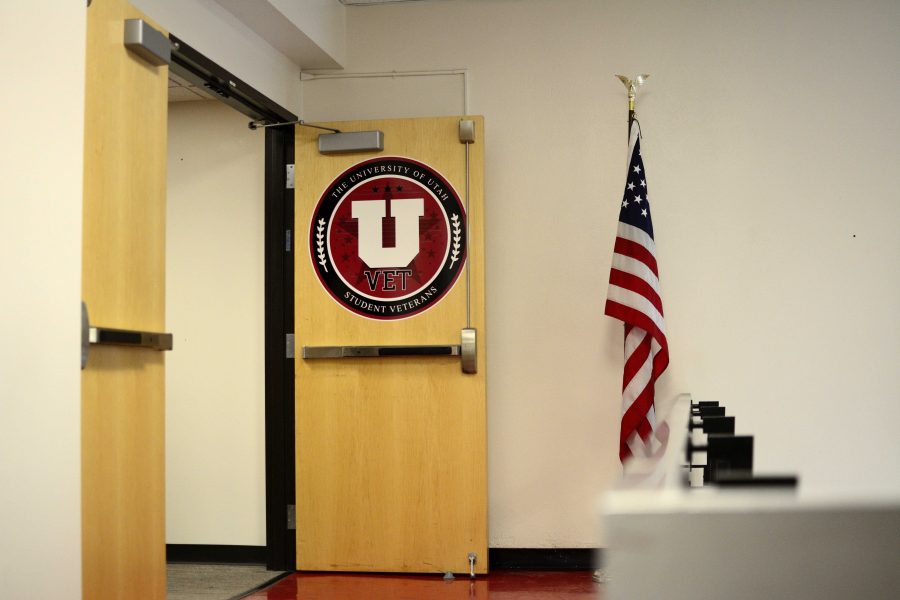 The Veterans Support Center on campus located on the top floor of the Union, Tuesday, November 3, 2015 (The Daily Utah Chronicle Archive)

Every year, the Veterans Support Center recognizes a single student veteran. The Student Veteran of the Year Award is given to an outstanding veteran student at the University of Utah.

These students are recognized for their community involvement, military service and campus service. The award is chosen by a committee of peers based upon an individual who provides outstanding service to their nation, state or community.

The honor consists of an engraved medallion and the recipient’s name on a plaque. There is also a $1,000 cash award provided by Zions Bank.

“They are 1,200 amazing people that come from all walks of life. These student veterans are represented in all colleges and do very well. All the deans tell me they wish they had more student veterans because they are a lot older and have had a lot more life experience. That kind of adds richness in the classroom,” director of the Veterans Support Center Paul Morgan said.

In order to be eligible, nominees must have served in the U.S Army, Marine, Corps, Navy, Air Force or the Coast Guard. They can be in the military or have previously served. Other requirements include having served in the community, being a current full-time student, having a cumulative GPA of 3.0 and having taken a minimum of 30 credits. Student veterans must be nominated through the nominee form by peer, faculty and staff, which is sent into the Veteran Support Center.

This year’s winner is Craig Hanson. Hanson started off with boot camp in Great Lakes, IN. Next, he was off to a corps school where he learned medical care. Then, he went to Field Medical Training Battalion, the last of his training before being sent to Afghanistan.

His objective was to keep surroundings safe by trained local Afghanistan police and soldiers. After five years of serving in the military, he started his educational career at the U. Hanson is majoring in biology and minoring in chemistry. His goal is to go to medical school after he graduates in the spring semester. Hanson would like to pursue trauma surgery and potentially go back into the military as a surgeon.

When Hanson looks back on his time in the military and his time at the U, all he sees is that he did his duty. “I’ve never really seen myself as the award-winning type, so honestly it came as a shock. I don’t see myself as anything special or standout, so to be nominated in the first place felt strange,” said Hanson.

One of the previous title holders was Jacob Salgado. During Salgado’s time in the U.S. Army, he worked closely with the military in Afghanistan, police and the Afghani community. He built strong relationships with them and gathered information on enemy activity.

Salgado encountered enemy fires and kept fighting towards his ultimate goal of protecting people. After he finished his duty, Salgado came to the U to begin his education. He majored in metallurgical engineering at the U and finished with a 3.6 GPA.

Along with his studies, Salgado worked on the federally funded Electrodynamic Sorting Project. While serving three years in the Army, Salgado received Army Commendation, four Army achievement medals and a Combat Infantry Badge among other awards.

Another student veteran to hold the title is Enrico C. Cecala. He graduated from a Navy Seal selection course and became Chief Petty Officer by age 25. Cecala worked on many massive operations and conducted over 185 combat missions.

For his work, he was awarded multiple times throughout his service. He then enrolled at the U. Cecala obtained his Bachelor of Science in Information Systems and later received a Masters in Business Intelligence and Analytics. He was constantly volunteering in multiple outreach programs and conducted fundraisers for veterans. Cecala serves as an example to students, veteran or not.

The Veterans Support Center is a place for student veterans to receive services, support and advocacy.

They offer peer mentoring, career guidance, counseling, free computer lab access and printing, coffee and refreshments, scholarships, financial aid assistance and even yoga. They work to provide all of the resources they believe could help students succeed.

Dedicated to helping veteran students who are on duty, in the National Guard, on reserve, any military spouses and their dependents as well as traditional veterans. The department’s mission is to refine and enhance individuals within the department. They provide aid in both academics and family matters, and in some ways is a family in itself.

“I have very much enjoy working here, it’s a very familial environment. I see many faces every day they have goals they are trying to reach and we doing our best to help them reach those goals,” said secretary of the Veterans Support Center, Dana Ranki.

When the director of the Veterans Support Center, Paul Morgan, was selected for the program as a Marine, he knew he would be back.

“It took me about 30 years, but I made it back [to the Veterans Support Center] it’s kind of a real honor and privilege for me to be helping these brilliant and resilient young people. My job is to support those student veterans,” Morgan said.