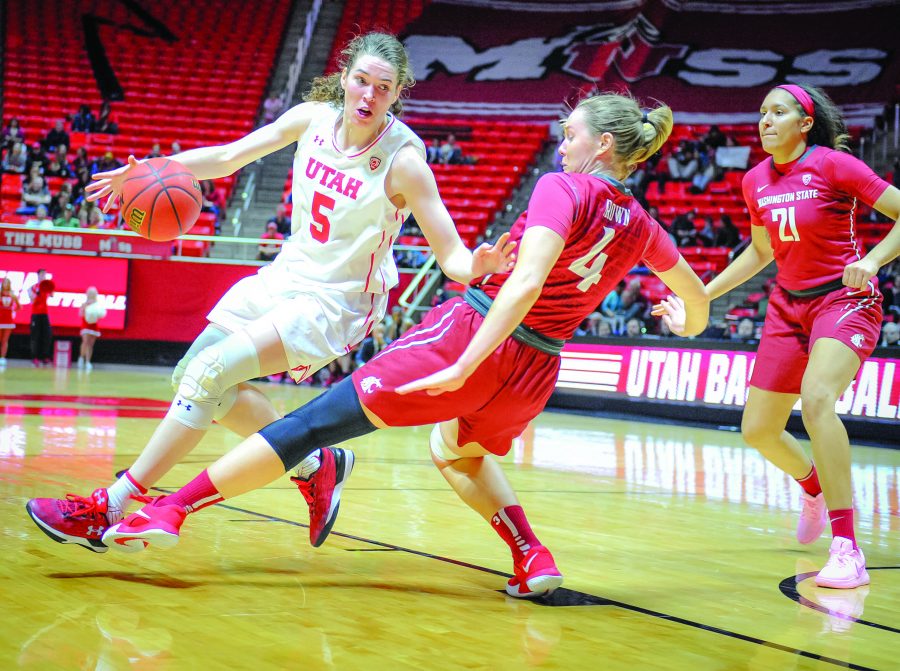 The University of Utah women’s basketball team features a blend of youthful talent and veteran presence that should allow the Utes the ability to compete in the Pac-12. It’s clear that they strive for being the best and are not a team to be overlooked.

There are many factors into why the U’s women’s basketball team has been so successful as of late. One of the main reasons why is senior Megan Huff.

Huff, out of Todd Beamer High School in Federal Way, WA, played and excelled in both volleyball and basketball.

Before Utah, she was named the Big West Conference Sixth Player of the Year each of the last two seasons at the University of Hawai’i. She was also named to the All-Big West Second Team in the 2015-2016 campaign, posting 9.7 points and 6.5 rebounds per game. She shot the ball efficiently, going 50.9 percent from the field, a stat that was ranked fourth in the league. Ultimately, she helped the Rainbow Wahine earn the Big West Tournament Title in ’15-’16.

As a freshman in ’14-’15, Huff joined the women’s basketball team in December while she was playing volleyball for Rainbow Wahine. She was an outstanding volleyball player as she recorded 17 kills and 15 blocks in just 16 matches. In the ’16-’17 season, she was a redshirt junior. It was clear that she was up-and-coming as a great basketball player.

The women’s basketball team had an 18-14 record last season and a factor in a lot of the success is Huffs’ contributions.

Last year, she was named to the Pac-12 All-Conference First-Team by the coaches and the media. This meant that many were beginning to take notice of her play and she failed to disappoint. This is only one of a myriad of accolades she’s accumulated in her time at the U. Last season, Huff finished the season in the top 11 in scoring in the league. On top of that, she was ranked fourth in field goal percentage, seventh in free throw percentage, sixth in defense and sixth in total rebounds per game.

She was making sure her name was known nationwide, not just in the Pac-12, but in the entire nation. She was ranked in the top 75 in field goal percentage in the entire NCAA (66th) and played in 30 games while starting in 29 of them.

In seven of the games, she posted 20+ points and five games in which she had double-doubles. Huff scored 23 against Purdue, 20 against Weber State, 16 against Pepperdine, 19 against BYU, 14 against Arizona, 22 against Arizona State, 17 against UCLA, 26 against Oregon State, 18 and 21 against Colorado, 23 against Kansas State and her career-high, 27 against Cal. There is no doubt that Huff has established herself as a reliable and consistent scorer for the team moving forward.

Huff has already exceeded expectations and has continued to build on her impressive resume, posting 22 points against Westminster and 15 against Nevada to start her senior year off on the right track.

Standing at 6′ 3″, she’s a lengthy defender and causes trouble for the opposing team. Huff has great range and is a good post-up scorer and a strong rebounder. Some basketball players tend to shy away from the moment during their careers. However, Huff has displayed that she has the ability to consistently drive into the paint with success and that she isn’t afraid to be aggressive.

With the team having six freshmen, Huffs’ responsibility will be even greater than last year in the sense that she’ll be given the opportunity to help the younger women grow into successful basketball players.

Over the course of the last so many years, Huff has demonstrated how much dedication it takes to become a successful athlete. From playing volleyball to basketball, she can do it all. This season will be a huge test for the Utes as moving forward, they will be presented with many challenges by on and off the court issues. However, Huff should be able to lead the way to another successful women’s basketball season for the Utes.