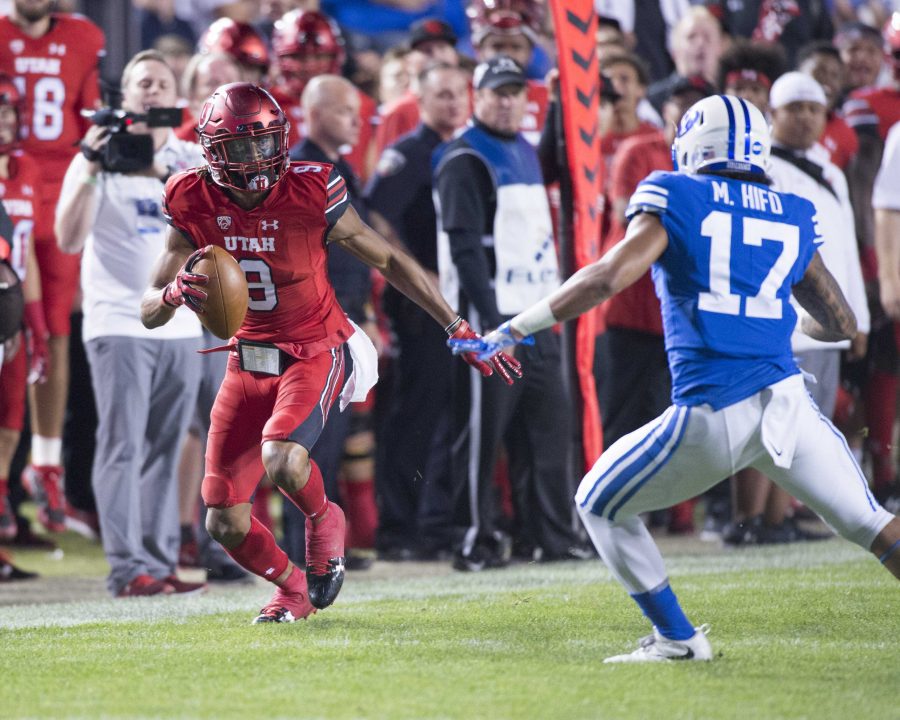 In the state of Utah, there are two sides to every battle. It is a state split between crimson red and navy blue, between the Utes and the Cougars.

The meeting of these two teams is an event commonly known as the Holy War, which is a silent nod to the religious background of both the state and the state’s largest private institution, Brigham Young University, located in Provo. In most of their sports, BYU is a part of the West Coast Conference but is independent when it comes to football.

On the other end of this competition is the University of Utah, located in Salt Lake City — just an hour’s drive north of BYU. More commonly referred to as the U or just Utah, the school is the flagship university for the state of Utah and a member of the Pac-12 athletic conference.

The rivalry between these teams is deep and can be traced back to the founding of each school over a hundred years ago. Utah was the first of the two schools founded in 1850, by the namesake of the team down south, Brigham Young.

Having the same founder is the source of much of the bitterness between schools, but it is also the close proximity and old traditions that turn the campuses against each other.

Many children in Utah were raised in households that identified as either Cougar fans or Ute fans, with generations of family members attending one school or another. Many kids even wound up attending the schools that they grew up rooting for when they reached college age. In some cases, children went against their family and switched sides when it came time for them to enroll in school.

One of the standout seniors on the Utah basketball team is Parker Van Dyke, who grew up in Salt Lake and attended high school just five minutes off of the U campus. Van Dyke cheered for the Utes growing up and he achieved his dream of becoming a Ute in 2013.

One of the biggest rumors on campus is that the statue of Brigham Young that was originally in front of the Park building on campus was stolen by angry Cougar fans, leaving the U with an empty spot where the statue used to reside.

On campus at the U, students and faculty alike take this tradition very seriously, upholding superstitions such as not wearing blue in the week leading up to the game.

Down in Provo, the students wrap their Cougar statue in saran wrap and keep eyes on the metal beast 24/7 because of an incident a few years ago when the metal cat was spray painted red by Utah fans.

One local business wanted to put a little bit more on the line for both teams other than bragging rights. On Sept. 13, 2007, Deseret First Credit Union announced something called the Deseret First Duel. The Duel was a competition set up by the credit union to award scholarship money to the school with the best record in head-to-head competition.

The competition is simple. Each of the selected sports is assigned a point value, with football being worth the most, and every other sport is worth fewer points based on attendance and success. Whichever team is able to reach 18 total points is announced as the winner.

Football will be the next sport to compete in the Duel, followed closely by men’s and women’s basketball. The Duel will conclude with baseball and softball at the end of the spring season.

One thing that unites people is the strong dislike of fans of the opposing school. While student athletes seem to be on the front line of this feud because they are competing, many students have a strong reaction the team down south as well.

Utah senior Kyra Dalpiaz grew up knowing about the Holy War, and it shaped how she faces game week.

“The Holy War is the epitome of football rivalries. It is something that I’ve had knowledge of since I even understood the concept of football. I grew up thinking Max Hall really hates me. It’s something me and my BYU-loving friends go back in forth on all year long, and all in good fun,” Dalpiaz said.

Dalpiaz is a seasoned veteran when it comes to cheering in this game, while freshman Colter Gansen knows what is going on with the rivalry even though it is his first time experiencing it as a student.

“I guess to me, the ‘Holy War’ is a fun local rivalry and it is nice going to the school that has won so many games because BYU is inferior,” Gansen said.

While Dalpiaz and Gansen can see the rivalry from a fan perspective, student athletes look at this game in a different light.

Van Dyke dreamed about playing for the U from a young age, and six years ago that dream came true. Van Dyke’s love for the rivalry is deep-rooted, and he has been attending games throughout his childhood. He says that the Utah-BYU rivalry is a part of who he is as a person.

“I’ve personally been a Utah fan my whole life and the BYU-Utah rivalry is a huge part of who I am,” Van Dyke said. “With every rivalry, there is more incentive and motivation to win between the two schools. It’s a huge game in the state, and for me it’s a great opportunity because I’ve grown up watching them, and it is fun to be a player now. Lots of people recognize the rivalry, and I like being a part of it.”

The feeling is the same amongst other student athletes who grew up in the Beehive State. Local kids grow up either wanting to sport the crimson red or the navy blue and to help their team take down the other. For most of the teams on campus, winning this game means just as much as making the postseason.

Dalpiaz fully understands that as a fan, the way that she feels about the game is vastly different than how student athletes see the game.

“I think the way I interpret it is different from the way student athletes do. They’re on the field with this team we have been anticipating to beat for a whole year. The athletes know that. It weighs on them. That’s a lot of pressure for a bunch of guys that are just trying to play a game that they love. This game is so hyped that it seems if you lost every game of the season, beating BYU would make every other loss seem irrelevant,” Dalpiaz said.

Due to some disagreements between the two teams, the Runnin’ Utes were forced to take a year off from playing the Cougars. This was right in the middle of Van Dyke’s career as a Ute, and he said that there was a noticeable change in the energy of the game when the two teams faced off again.

“I think playing them last year, there was an added element to the game. Because it was canceled for a year, there was a little more hype added to the game because the state had to go without it for a year,” said Van Dyke. “To me, it made that game a little bit more of a rivalry because there was some lore animosity and conflict between the teams. I think that continuing the rivalry will make the games even better each time. It will always be a great game.

This will be Van Dyke’s last time playing the team down south, and he hopes that this year the Utes can win the game. Utah has not come out of a BYU match up in basketball with a victory since 2015.

At the end of the day, Van Dyke doesn’t wish any disdain on the Cougs, but beating them is towards the top of their list of things to accomplish going into their season.

“I don’t necessarily have a hard hatred for BYU, but I’ve always cheered for Utah, and I want to win that game,” Van Dyke said. “It’s a goal going into the season as a Utah player. We have certain goals as a team such as getting a certain place in the Pac-12, making playoffs and beating BYU. It’s something we shoot for.”