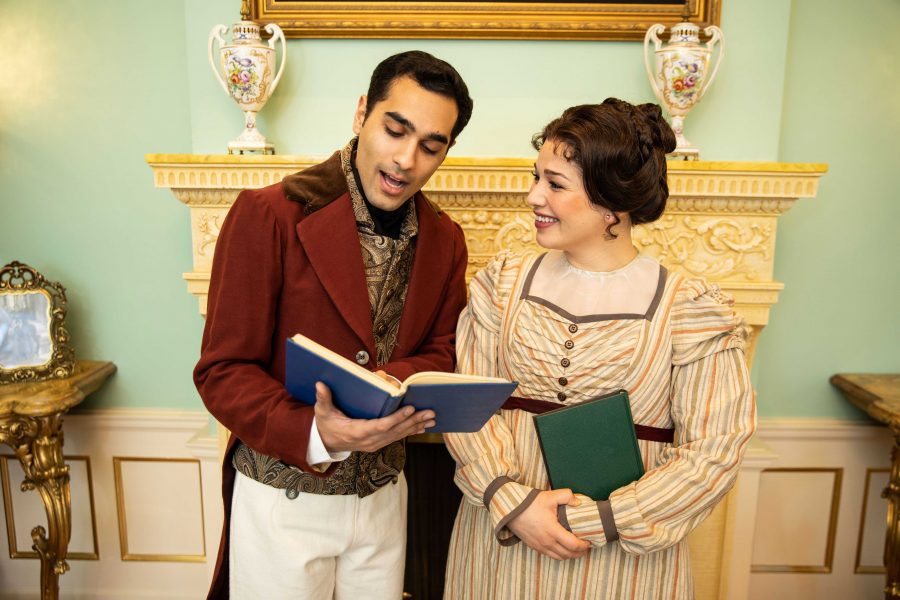 Jane Austen lovers like myself will be delighted to hear that Austen’s work has not come to an end quite yet. Pioneer Theatre Company is revitalizing the glory which is “Pride and Prejudice” in their production of “Miss Bennet: Christmas at Pemberley” that will serve as a continuation of the book. This sequel to the most recognized Austen novel is sure to make even the weariest of classic novel readers excited.

The production follows the life of newly married Elizabeth Bennet Darcy (played by Emily Nash) and her sisters Jane (played by Rachel Clausen), Mary (played by Elizabeth Ramos) and Lydia (played by Jessica Naimy). She invites her sisters to join her and her new husband for Christmas at their new home. Little does Elizabeth know, this festivity will set up her sister Mary for her own romance. When an unexpected visitor arrives at the holiday, he catches young Mary’s eye.

For those who haven’t had the pleasure of reading “Pride and Prejudice,” young Mary is characterized as the bookish one. There is a response to anything and everything, it just has to be found in the right book. Mary is no longer the plain and forgotten Bennet sister. “Christmas at Pemberley” not only gives Mary’s character the opportunity to thrive on her own, but it also sticks with the themes which Austen set up in the first novel.

The character of Arthur de Bourgh (played by Jamen Nanthakumar) is the unexpected guest who shows up for Christmas at the Darcy’s. He, like Mary, prefers books to most people. This dynamic between the two bookworms can lead to so many different outcomes, yet as much as the production builds on the background from “Pride and Prejudice,” it doesn’t rely on it entirely.

In “Pride and Prejudice,” Elizabeth and Darcy hate each other from the beginning. They are completely different. In the case of Mary and Arthur, it’s the opposite. Arthur has recently come into a large sum of money like Darcy, but Mary is everything Elizabeth is not — soft-spoken, gentle and tame. While the Bennet’s family situation was in turmoil in the previous story, “Christmas at Pemberley” takes a more comedic and warm path, inviting viewers to the familiar but keeping them interested with a different take on romance. This take is exactly what makes the Austen classic so inviting.

As Elizabeth Bennet so famously said, “Give a loose to your fancy, indulge your imagination in every possible flight.” This is exactly what Pioneer Theatre Company is doing with “Christmas at Pemberley.”

Don’t miss your chance to relive Jane Austen and discover something new about her beloved characters. “Christmas at Pemberley” will be playing at Pioneer Theatre from Nov. 30 to Dec. 15, 2018. You can watch the show on Mondays-Thursdays at 7pm, Fridays-Saturdays at 7:30pm, and a Saturday matinee at 2pm. Tickets range from $30-$45 when bought in advance and $5 extra when purchased the day of the show. Children’s tickets in grades K-12 are half-price on Mondays and Tuesdays. Students get in for only $5 with a U card the hour before curtain.