Swim and Dive Set For Final Meets of the Year 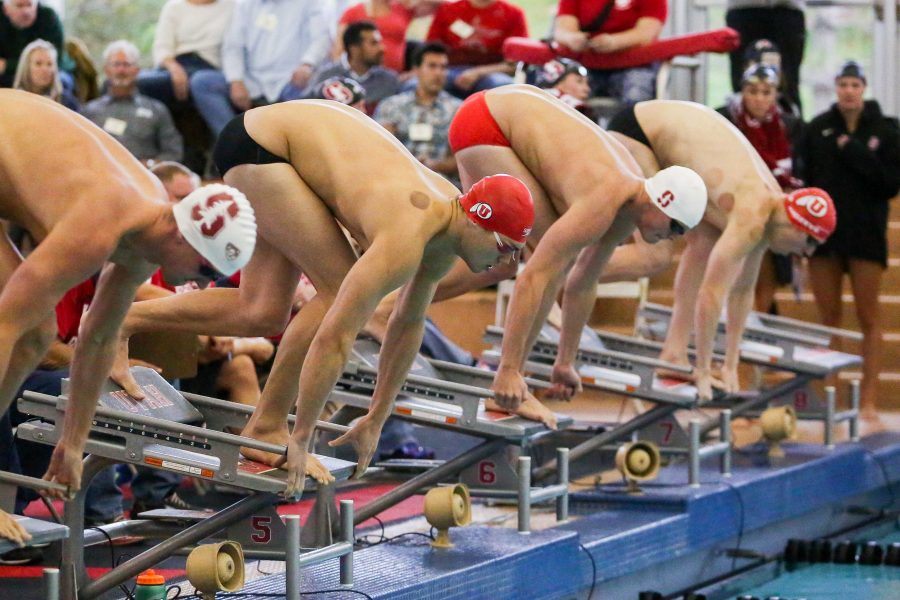 Sophomore Rahiti De Vos starting out of the blocks as the Utah Men and Women's Swim and Dive Team take on the Stanford Cardinals at the Ute Natatorium in Salt Lake City, UT on Friday, Oct. 20, 2017. (Photo by Curtis Lin/ Daily Utah Chronicle)

Coming up this weekend, the University of Utah swim and dive teams will be splitting up and competing in two separate meets. Both the men’s and women’s teams are traveling to compete.

The men’s and women’s diving teams will make the long trip to Minneapolis, Minnesota to compete in the Minnesota Diving Invitational.

Most recently, the dive teams have come off of two meets on the road. They competed at the beginning of the month at the University of Southern California, and more recently in Columbia, Missouri at the Missouri Diving Invitational.

In Missouri, the Utes did well against their opponents. Senior Daniel Theriault set a new school record for diving, and won the event overall. On the women’s team, Makenzie Caufield led the team with a 190.10 overall score, which placed her at 15th.

Men’s and women’s swim will stay home in Salt Lake City while they host their own Utah Swim Invitational featuring a number of other teams. The last appearance from the swim teams was on Nov. 2 at the University of Nevada Las Vegas. Both teams men’s and women’s swim and dive came out on top at the end of the meet.

Individually, Gillian St. John and Aryanna Fernandes both won their events which were the 50 free and the 100 free, respectively. Additionally, Jordan Anderson, Emma Lawless, Sara McClendon and Clare Greenlow were among the list of victors at the meet.

The 400 medley relay team also came out on top with a time of 3:44.71 that gave the Utes one more win to take back with them to Utah.

There was success on both teams both in the individual and team events. The men’s team won in 11 different categories, and the women’s team won seven events in the meet.

The victory at UNLV was the second for the men’s team, putting their season record at 2-2. The women’s win was their first on the season, and they have a 1-4 record.

The swim team will start their meet in Minnesota on Thursday, Nov. 29, while the divers will begin competing in Salt Lake City on Friday, Nov. 30. Both of these events will run all day, and will conclude on Saturday, Dec. 1.