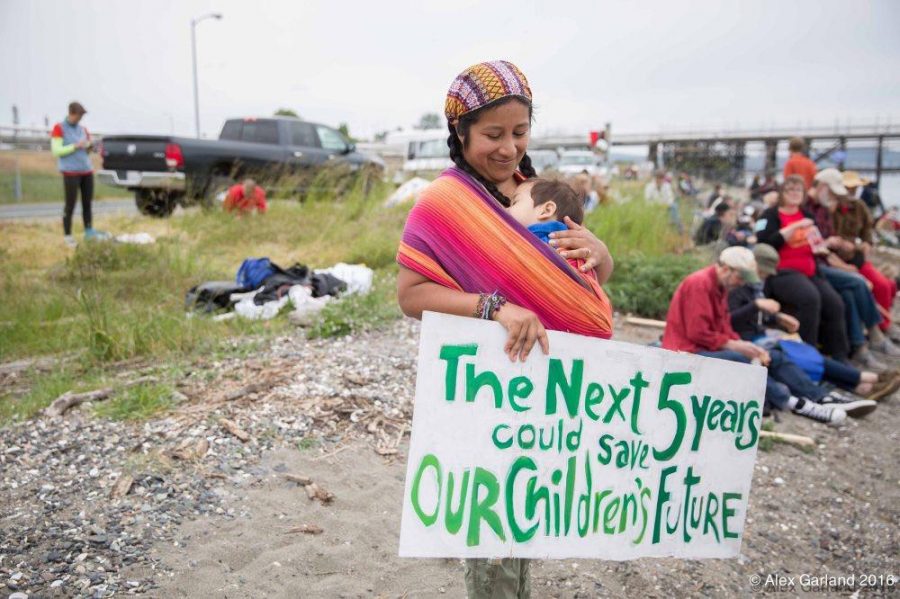 By 1996, the Hopi people had already endured a 10-year drought, but the drought’s grasp kept tightening. Only an inch of rain had fallen since the previous August. Shungopavi, one of the three villages on the Arizona reservation, was described by inhabitants and government officials as a dystopian landscape. Fields were barren except for the occasional shriveled corn stock and cattle that lie dying. Turning to their faith, the Hopi people organized prayers and dances to combat the drought. While it rained on Shungopavi’s fields the day after a ceremonial dance at Chimney Rock Archaeological Site, it was too little and too late to save the year’s crops or livestock. “The rain gods aren’t listening,” said Hopi farmer Max Taylor. More than a decade later, Shungopavi remains in extreme drought, and just like the Hopi’s rain gods, government officials are not listening to native voices calling for relief.

Scientific evidence for climate change is unequivocal. While the Earth has historically gone through cooling and heating periods, the current warming trend is unprecedented and most scientists agree it is extremely likely the result of human activity. Sadly, many elected representatives and government officials are climate change deniers who have worked to dismantle environmental regulations. Although every American is affected by global warming, native people are disproportionately affected by climate change as they are also victims of marginalization. By failing to recognize and create meaningful legislature to combat climate change, the colonization of this people by our government is reinforced and continued.

Many reservations faced chronic drought conditions prior to news reports of record high temperatures and abnormal dryness in the Western United States. As precipitation has decreased over the decade, water has been quietly diverted from native communities to commercial farms. One of California’s farming communities, Central Valley, supplemented its water supply by damming the Trinity and Klamath Rivers, which run through the Hoopa Indian Reservation. It is easy to rationalize California’s actions as Central Valley produces a quarter of the United States’ food, but redirecting the Hoopa’s water has devastated this fishing community. While the phrase “water is life” is most commonly associated with the Standing Rock Sioux Reservation, it echoes the sentiment of many native people facing environmental colonization in the United States.

Most of the western states, including Utah, spent the summer months on fire. In California, a total of 7,579 fires have burned 1,667,855 acres, killing dozens of people. “Camp Fire” and “Woolsey Fire” continue to burn the state at both ends. Next year, wildfires are likely to be more prevalent and destructive due to global warming patterns. This puts Native Americans in increasing danger as they are six times more likely to be victims of wildfires than other Americans. When United States officials forced tribes onto reservations, the land was typically less desirable and now the geography of these reservations plays a key role in this peoples’ vulnerability to wildfire. As reservations typically have very high Wildfire Hazard Potential ratings and are often remote, these areas are more likely to catch on fire than non-reservation land and emergency responders can take hours to arrive on the scene. Recovery after a fire is also incredibly difficult for native people. As Jennifer Perfater, the Cheyenne Tribal liaison for the American Red Cross of Montana, explained, “Most of middle-class America would be able to recover [from the fire], but on the reservations here, you’ve got people who don’t have homeowners insurance because they can’t afford it. They’ve completely lost their homes.”

By failing to recognize and create meaningful legislature to combat climate change, our government’s willful ignorance continues the colonial abuse of America’s indigenous people. From Hopi farmers facing famine in the Southwest to Hoopa fishermen facing destitution in California to Cheyenne families facing homelessness in Montana, indigenous people are on the front lines of climate change. Understanding their dire need for relief and unable to rely on outside support, native peoples have been using traditional tribal knowledge to combat devastation caused by droughts and fires in their communities. In Arizona, the Hualapai Tribe is reducing its vulnerability to drought by increasing its collection and storage of rain and river water. In Northern California, North Fork Mono Indians are restoring water resources and reducing wildfire fuel by thinning overgrown forests. In Montana, the residents of the Flathead Reservation are carefully applying prescribed burns to their land to prevent wildfires. Not only are these traditional techniques of cultural importance to these people, but they are also vital to natives’ physical and economic survival in America.