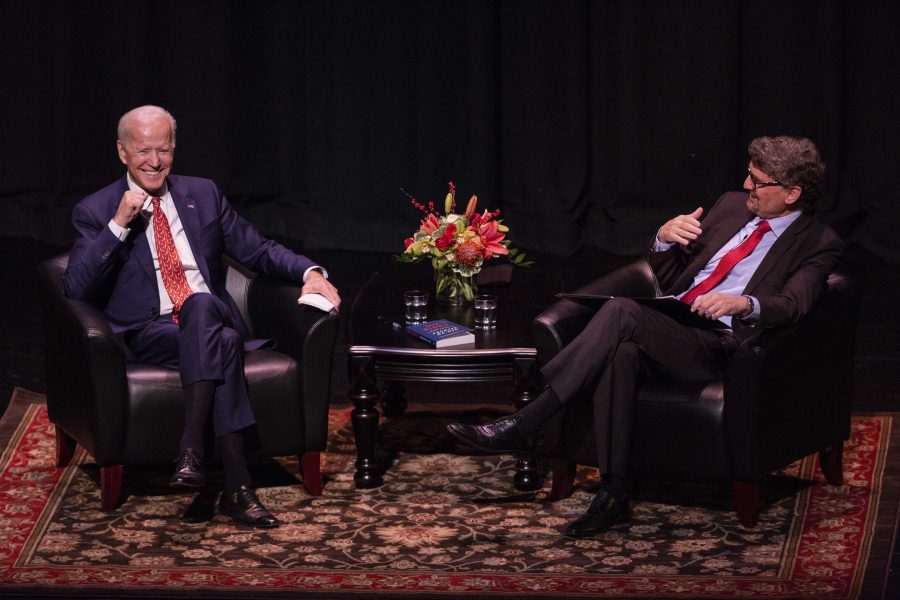 Former Vice President of the United States Joe Biden speaks at Kingsbury Hall on the University of Utah Campus on Dec. 13, 2018. (Photo by: Justin Prather | The Daily Utah Chronicle).

On Dec. 13, the University of Utah hosted former vice president Joe Biden. The energy was high in Kingsbury Hall, many arrived early to take seats in the packed theater and take pictures. Even a class of fourth graders from Mountain View Elementary could be spotted in the crowd, making the iconic U with their hands for pictures.

The event began with a short video highlighting pictures and video from Joe Biden’s extensive career. They ranged from clips of speeches from his time in the Senate to relaxed photos of him with President Obama and his family.

Mark Matheson, director of the MUSE project, came to the podium first. He thanked Biden for agreeing to come and also all of the hard work put into the event by the university and MUSE.

Ruth Watkins, president of the U, came out next to announce that Biden would speak on this year’s theme for MUSE: hope, hardship and purpose.

Dr. Mary Beckerle of the John Huntsman Cancer Research Center welcomed Joe Biden to the stage. She described him as the “power of purpose with passion, that is Joe Biden.”

The audience welcomed Biden with a standing applause and cheers echoing through the auditorium. Before taking his designated seat in the center of the stage, Biden went to Beckerle to give her an embrace, admitting “I already broke the rules, I’m sorry,” causing the audience to laugh before he took his seat next to Matheson, who moderated.

The entire time, Joe Biden’s visit was filled with jokes and the audience’s laughter, including his statement, “I hate getting out of the airport without my skis,” when talking about Utah. The former vice president began by speaking on how his mother and father instilled his core values from a young age, including proper dinner place manners and, according to him “giving my word as a Biden,” which he continues to say to this day.

Biden also recalled his time as a senator when Barack Obama asked him to be his running mate but he originally said no. He claimed that “vice presidents are just stand-in equipment” and initially believed that he could help out more through his work in the Senate.

It was his family who eventually changed his mind. His wife and children immediately thought he should take the position but it was his mother’s influence that made him realize that he needed to say yes to the opportunity. He recalls it as “the best decision my family ever made for me.”

Biden also confirmed that “all the memes are true” in reference to his friendship with Barack Obama, but he also clarified that it was, in fact, Obama who made the first friendship bracelet.

The bulk of the former vice president’s time answering Matheson’s questions was dedicated to his time as a college student. His advice for undergraduates was to find what you love and gives you purpose and make that your career. He reminded the audience that there are many people stuck in jobs they have lost interest and purpose in and that this will not allow for a fulfilled life.

Matheson asked, “Why is money not a priority?” Biden responded with his three pieces of happiness: someone to love, something to do and something to look forward to. Biden has met many successful people in his lifetime and he claims that the key to success and happiness is to be doing something meaningful.

Biden clarified that having money is not a bad thing and that much good can be done with it. But he said that “money as a goal is not satisfying.” He recalled his vetting process for vice president as easy and fast because he did not have many assets. He said that he’s doing better recently, “down to one mortgage,” causing laughter from the audience. He said because of his book deal he was able to give away some of the proceeds to charity and recalled it as very rewarding.

Joe Biden also waived the fee offered to him to speak at the U. He claimed “it should be put to better use,” suggesting that the money be put into scholarship funds because the cost of college today has gone up in cost more than anything else, even more so than healthcare.

The former vice president even offered his advice on marriage: “One of you has to be more in love than the other.” He recalled a time when, during his term in office, his wife decorated the window panes of his office with “Joe loves Jill” in a heart. He claimed that continued romantic attraction is also needed in a healthy, long-term relationship. Persistence is needed as well, he said, as he had to ask his wife to marry him five times before she said yes.

The audience and Biden turned emotional as he talked about loss. He began by talking about how after he lost his wife that he moved forward by finding purpose in life. This continued when his son, Beau, passed away. He claimed his sons raised him as much as he raised them. Beau asked his father to “promise him as a Biden man” that he would be okay after he passed, knowing how much his father’s promise means.

Biden kept the extent of Beau’s sickness from the public and his staff because he was asked to, only confiding in Obama. Biden had planned to run for president in 2016 but later did not after Beau had passed.

The former vice president is now focused on what he calls “the new moon landing,” applying what drove humanity to the moon to the concept of finding a cure for cancer. The audience felt the emotion when he asked for them to raise their hand if they lost someone they love, like he did, to cancer. Most of the audience’s hands were raised and he used this to demonstrate further the need to find a cure. He expressed his appreciation for what the John Huntsman Cancer Research has done to aid in this goal.

Biden concluded with expressing his admiration for Utah, the church leaders of the Church of Jesus Christ of Latter-day Saints and John Huntsman. He recalls the best gift he ever received was from an LDS apostle who gave him a seven-volume book on his genealogy. He said that he enjoys coming to Utah, “even though you vote the other way.”

Biden’s remarks did not really touch on politics, other than to express the troubled state the country was in when he came to office and in calling Putin a “thug.” His following remarks remained on the MUSE topics of hope, hardship and purpose. Matheson commented on the reason that he stayed away from asking Biden about politics: they “wanted it to be humanistic and about values,” and the visit was “about action and inspiring undergraduate students.”

As Biden was given a standing ovation to his exiting the stage, he came back out to leave one more message to “spread the faith.” His remarks encouraged college students to find their purpose and passion and find a way to make a career out of it.

After the event, Matheson told the press that he came away “feeling honored to be next to vice president Biden and inspired,” hoping that undergraduates felt the same way. He also touched on the fact that he was not sure what would happen to the waived speaking fee because it was a complicated issue decided on by the university.

Student Felipe Noriega, a senior in English and part of the MUSE program, said that Biden’s remarks were “great because a lot of undergraduates are in a state of trying to find their purpose and especially to make decisions based on making money.” Noriega also said that his remarks added perfectly to the MUSE’s theme this year. “MUSE is all about spreading awareness, especially concerning purpose,” he said. “Having influenced many people and having a lot of experiences Joe Biden gave advice that can help undergraduates to find their purpose.”