A Star on the Track and on the Pitch 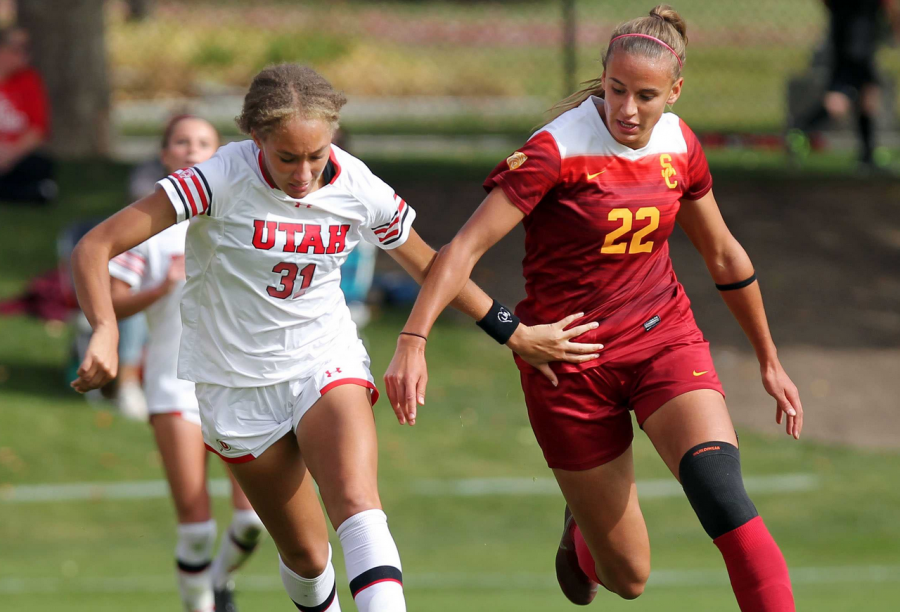 College athletes are some of the most dedicated and focused students on campus. Between juggling classes, studying, practice and sometimes jobs or labs, these individuals have a lot on their plates.

Now, imagine the stress and work associated with being a college athlete and double it. For University of Utah freshman athlete Brooklyn James, this is her life.

James is a two sport athlete competing at the Pac-12 level in both soccer and track and field. She is also starting out on the path to pursue a degree in communications.

An Oregon native, James has been playing soccer since the age of four, and it has been her main focus in athletics for as long as she can remember. She began competitively running on her middle school cross country team, and she moved to track and field when she started high school a few years later.

During her senior year of high school, James had signed her letter of intent to play soccer at Boise State. Unfortunately, her dreams of running track in college would not be realistic in this situation. Luckily Utah’s track and field coach, Kyle Kepler was able to make James an offer that would change her mind. She could play both of the sports that she loved at the next level.

“It was actually the track coach at Utah who reached out to me and said that they had a plan that would allow me to play both sports,” said James. “That offer is what really made me change my mind and come to Utah.”

Now that she has completed her first season of soccer at the U and she is at the start of her first season with the cross country team, James has had some exposure to the stress associated with being a two-sport athlete.

Due to NCAA compliance guidelines, James is allowed to practice for 20 hours on either team. When she is in season with one sport, she easily passes that mark and so she is not allowed to participate in organized practices with the team that is out of season.

For example, during soccer season, she is not able to participate in organized track and field practices. In order to still bond with her teammates and stay up to date with training routines, James attends practices but only watches as to follow the rules set in place for her.

“During soccer season I would go on runs on my own and I would watch practice on my days off,” James said. “Now during track season, I’ll train soccer skills in the morning on my own and then go to practice for track later.  I’ve been doing this for awhile, so it is a schedule I am used to. It is just being committed to doing both that is really the key to being successful.”

Speaking of commitment, it takes a team to help James be successful between school and practices between sports. James has support on the academic side as well as the athletic side through the athletic department.

The athletic department provides academic support to all student athletes through tutoring and study sessions. This is important to James because she has less time off than most students, so she needs to be extra focused in order to accomplish all of her tasks.

On the training side of things, the soccer and track teams have different trainers for both athletic skills and weight training. In both cases, the trainers for each sport have been willing to work with each other in order to make sure that James is training correctly and safely.

It is unique for James to be an athlete who participates in both a team and an individual sport, and the experiences in both have been valuable to her as an athlete in different ways.

“In soccer, I really love the team aspect of it. Playing with a team offers more support, and the atmosphere is great,” James said. “In track, the individual accomplishments are that much bigger because you can see the end result and be proud because it is something that you accomplished on your own.”