The Religious Foundations of the University of Utah 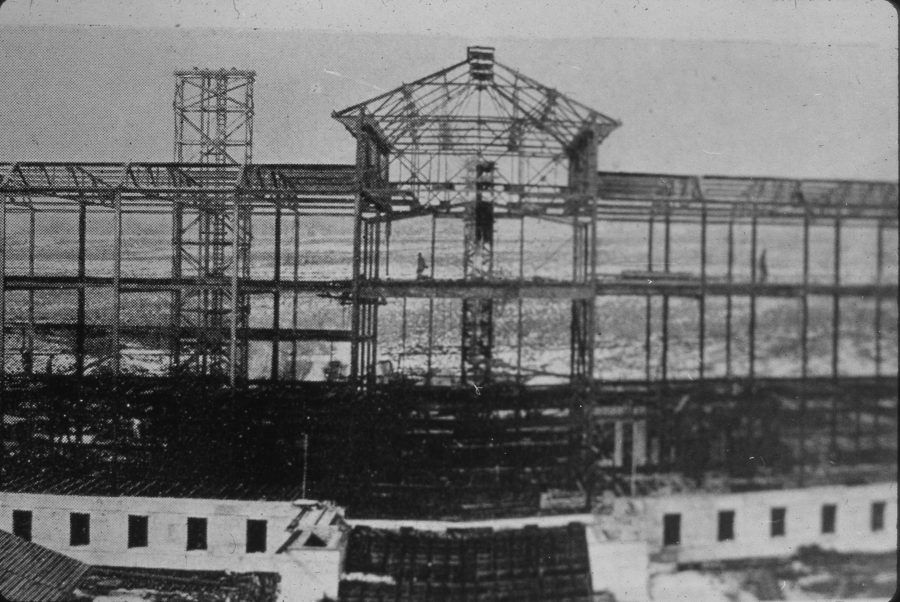 Construction of the John R. Park Building (Courtesy of the University of Utah Archives)

As the spring semester begins at the University of Utah, so do the campus tours. From high school students to prospective transfers and their parents, U Ambassadors have their hands full. The tours are as thorough as they can be in the allotted time. They cover aspects of the U’s history, construction and all the information that could possibly be useful to a prospective student, including where the most comfortable sleeping spots are at the library.

However, there is one thing that incoming students will not learn about during a tour and that perhaps many current students are also unaware of. It is the history of the founding of the university and its connection to Brigham Young and the Church of Jesus Christ of Latter-day Saints.

“We try to steer clear of any religious aspect [during the tour] because this is a religiously inclusive university and so we don’t want to make anyone, especially prospective university students, feel like the university leans one way or another,” said Wendy Joseph, a freshman at the U and an ambassador who has been guiding campus tours since August. “When we talk about the history of the university we mainly focus on Presidents’ Circle and we talk about how each building is named after a different president of the university.”

Common perception views the U as one of the more liberal colleges in Salt Lake City, particularly when it comes to a comparison with its rival BYU. Joseph agrees, stating that “I think because we [the U] are more inclusive of all groups and we have a huge diversity that we are more progressive with our mindset [as compared to other universities in the state].”

While the current U culture may be perceived as more liberal, above the heads of students taking naps in comfy couches lies a collection of rare books. If you climb up to the 4th floor of the Marriot Library, carefully clean the oil off your hands and deposit your belongings in a locker. You may be transported to a time when twenty-five male students attended the University of Deseret in the “parlor of a primitive home,” as stated by a pamphlet published in February of 1950 by the U to commemorate the centennial anniversary of the university’s founding.

To students who see the U as an institution boasting a liberal culture, parts of the ordinance incorporating the University of the State of Deseret — which can be found in “The University of Utah: A History of its First Hundred Years, 1850 to 1950″ — might be shocking to readers.

Appendix B of the ordinance, for example, introduces the U as “an institution which is like the foundling babe of the Hebrews. It is the child of providence and destined to live and flourish.” However, as Joseph claims, the university is and was an inclusive institution from its start. The ordinance goes on to proclaim its support for all enrollees of creeds. “Let Christians, Sceptics, Pagans, Jews, Mohammedans, remember this institution with favor, for some of their brethren will be beneficiaries among us. A little surplus invested here will bring you an hundred-fold and show favor to the Lord,” it states.

“A History of its First Hundred Years” states the institution was “a child of the Mormon setting in Nauvoo from where formative influences trace back to New England and the laws of Massachusetts where the idea of education first took root and found expression in American Culture.”

However, if the religious verbiage included in the ordinance might appear strange to some, it may be worth noting that a great number of the oldest and most prestigious institutions of higher learning in this country were steeped in religious culture. “A History of its First Hundred Years” is careful to inform readers of this context, stating that education in the U.S. was founded by religious culture, reading “the churches promoted school so that the people ‘should not perish in unbelief.’”

What evolved from this religious founding may be a liberal institution, but some might agree with the writers of the pamphlet commemorating its centennial anniversary. After boasting the material growth of the university in terms of land and enrollee expansion, the 1950 pamphlet goes on to mention that “the greatest asset of the University is not its growth in size of numbers, in buildings or in grounds. Its greatest asset is the spiritual ideals it cherishes, founded upon an honorable and rich heritage from the past.”