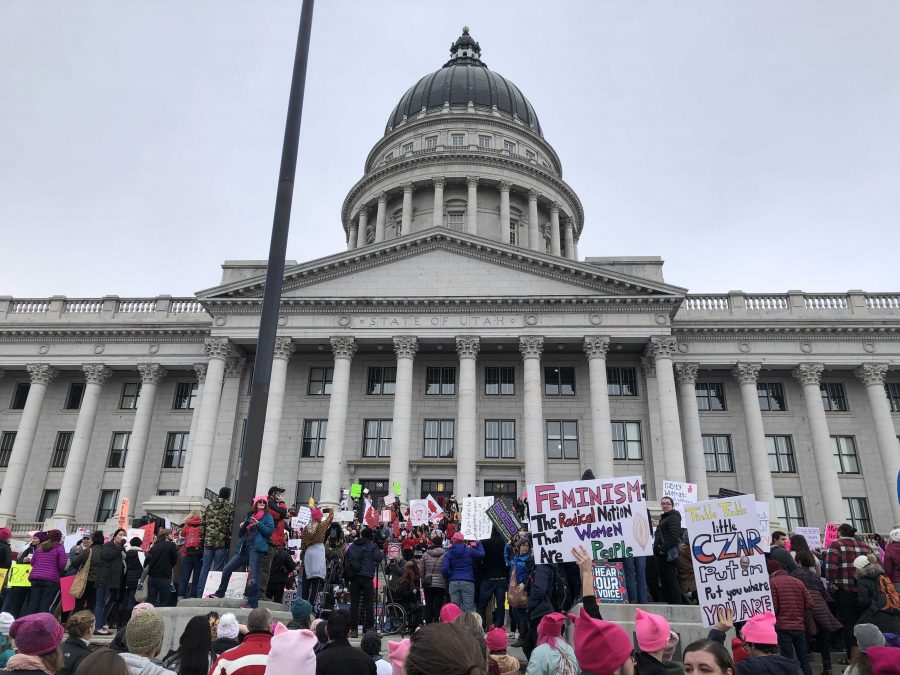 On Jan. 19, people from across the state of Utah met at Washington Square Park to participate in the 2019 Salt Lake City Women’s March on Utah. Women and their allies marched nearly a mile and a half from the park to the steps of the Utah State Capitol. The protestors were met with an ASL interpreter and ADA accessible seating.

The March was organized by People for Unity, an LLC youth-lead political action group organized in 2016 aimed to get students to become involved in their communities and informed about their local government.

Colette Raptosh, a University of Utah freshman majoring in political science, organized the group when she was 16 while living in Idaho. When she moved to the U for school, she started a second chapter, run entirely by students from the U.

“I like to say there is strength in numbers, but more importantly, there is strength in diversity,” Raptosh said. “It matters what we are celebrating today: all women. We cannot move forward if we leave voices out, if we don’t have a hand in from all of our sisters. Our movements must progress as intergenerational, interracial and inclusive.”

The Women’s March on Utah happened in the wake of the DNC and other national groups and politicians distancing themselves from the national Women’s March, due to leadership’s association with Louis Farrakhan, the current leader of the religious organization, Nation of Islam.

The People for Unity’s march is one of the groups that disassociated from the national march after these relationships were disclosed.

“We are our own group,” said Dieu (Jill) Hoang, a member of the People for Unity. “We are very inclusive and welcome everybody, so we’re not at all associated with the national women’s march. Our march is happening the same time as other marches, but we’ve declared ourselves independent, and are completely run by students.”

Despite the controversies, hundreds of people attended the event. The march featured many prominent women from around the state. The first speaker was Yolanda Francisco-Nez, the Executive Director of Restoring Ancestral Winds in Salt Lake City. Her speech focused on honoring the Native women across Utah and the United States and their place in the Women’s March.

“We as women cannot separate ourselves from the earth, who made us,” Francisco-Nez said. “Today, we pay homage to the Native women who make Salt Lake City a top ten city for missing and murdered indigenous women. Today, we honor them and we continue to fight for justice on their behalf. A nation is not conquered until the hearts of its women are on the ground. May we continue honoring the Goshute, the Navajo, the Ute, the Paiute and the Shoshone, and give gratitude to America’s original inhabitants.”

Francisco-Nez was followed by Saida Dahir, a teenage student, poet and activist in Salt Lake City.

Dahir ended her speech with a poem, titled “Don’t Cry,” about finding strength in her identities.

“To cry they say, is to be weak, to be women,” Dahir said. “From a young age, I was taught not to cry. Told that nothing good came out of that womanly expression, but my tears are my way of washing my fear. I will bottle them and bathe on days when I feel hopeless. I will lend them to you when yours have run dry. To cry is to be powerful, and to be powerful I say, is to be a woman.”

Ermiya Fanaeian, president of the College Democrats of Utah and co-founder of March for Our Lives Utah, also spoke at the march. She called for a more unified women’s movement.

“We march for women whose dedication to their families is questioned because they want to serve their communities,” Biskupski said. “We march for every pantsuit the press deemed ‘unbecoming,’ and we march for every woman who the media declared ‘too unlikeable.’ This march is about charity, equality, it is about dignity, it is about pushing forward legislation and policy that will build women up in their homes, their workplaces and our communities. This is why Utah must be the state that puts the ERA into ratification. It must be us. We know when the going gets tough, women keep going.”

“Extending and protecting the rights of others doesn’t detract from my rights — it’s not a zero-sum game. Instead, I think we all do better when the rights of others are actively pursued and defended. I was excited to see students from the U take such an active and forward role in planning today’s march through their involvement in People for Unity, and I was thrilled to see student activists from the U address the crowd. It’s quite clear to me that our students are going to take the lead in addressing and solving problems that persist both in Utah and far beyond our own community.”