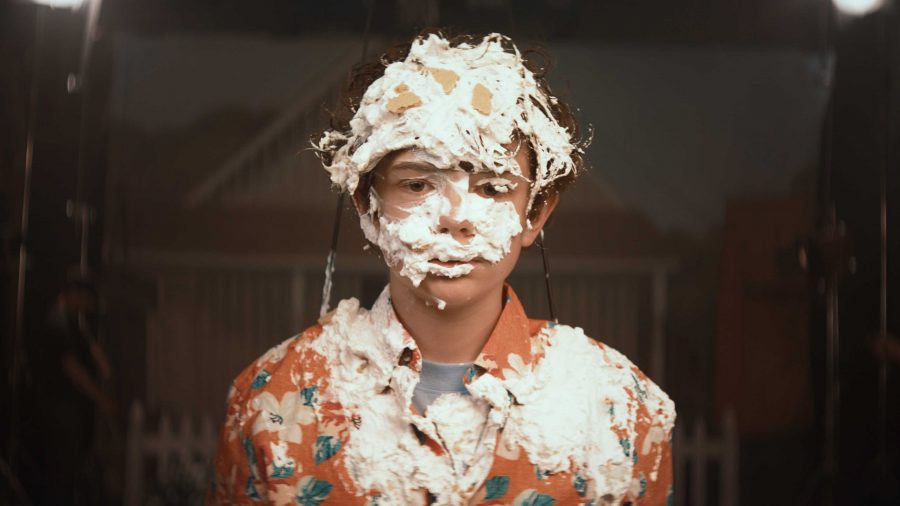 In the opening scene of “Honey Boy,” the camera flashes quickly between a young actor filming scenes of blockbuster films and his increasingly destructive behavior off-screen. Soon, the audience is not sure what is acting and what is reality until the chaos ends in a destructive car crash — the artificial explosions and adventure of a Hollywood movie turn into sobering real-life consequences.

This scene encapsulates the most interesting instincts of an ambitious, sometimes frustrating film. Directed by Alma Har’el and written by Shia LaBeouf, “Honey Boy” alternates between two timelines. Otis (Lucas Hedges) is a successful actor in his twenties with both legal and drinking problems. In court-ordered rehab, he begins to reflect on his troubled childhood. Young Otis (Noah Jupe) is also a performer, managed by his father James (LaBeouf), a former rodeo clown. Young Otis has a clear gift for performing, but he is let down by his father’s selfishness and his history of drug addiction and violence.

32-year-old LaBeouf has already been through a lifetime’s worth of career transformations, moving from child star to blockbuster leading man to performance artist. In the past decade, his tabloid-friendly antics have overshadowed his other work — instead of being revered as a genius, he has mostly turned into a meme. His behavior was significantly weirder than the typical Disney Channel star breaking bad — yes, there was alcohol, but there was also plagiarism and 24 hours in an elevator. This latest project is not a particularly surprising career move. LaBeouf clearly wants to move on from his Hollywood past, and, with “Honey Boy,” he can spend more time with his favorite subject: himself.

The film is semi-autobiographical, and in a Q&A after the film, LaBeouf explained that besides small details, such as combining certain minor characters, the arc of the film was true. Even the film’s brushes with magical realism are true to LaBeouf’s experiences — he said of one scene in the film, “It was truth, but also like a rainbow. I didn’t really chase a chicken to see my dad, but also I did.” Both the film itself and its behind-the-scenes details — LaBeouf wrote the screenplay as a sort of therapeutic exercise in rehab — feel, intentionally or not, like a sort of rejoinder to LaBeouf’s real-life antics. This conflict, one of public image, personal transformation and rehabilitation in every sense of the word, is as fascinating as the conflict presented on screen, and both deal with similar questions of celebrity and absolution.

Child stardom and the aftermath of addiction are not exactly new storytelling territory, but Ha’Rel and LaBeouf expand on these ideas in interesting ways. Throughout the film’s visual motifs, like water and chickens, the plot cycles through both timelines. All three main performances, from Hedges, LaBeouf and Jupe are in conversation, covering a similar territory of rage, toxic masculinity and addiction. These parallels, which are sometimes clunky, sometimes clever and sometimes both, try to elevate the familiar patterns of the addiction drama and create something more artful than a therapeutic exercise. At its best moments, “Honey Boy” illustrates how trauma and pain can cycle through family histories, creating an endless line of victims and perpetrators.

These themes, unfortunately, cannot fully carry the film’s second half. This section is less comedic and contains less momentum — after introducing some interesting scenarios and well-drawn characters, LaBeouf’s screenplay runs out of steam. As the film ratchets up violence and trauma, it feels more conventional and less nuanced. The final scenes especially are frustratingly incomplete. While “Honey Boy” did not need definitive closure, it fails to solidify meaningful ideas about its characters or narrative — when the film peters out abruptly, the ambivalence feels like a cop-out and not a coherent artistic choice.

Plenty of early scenes in “Honey Boy” were perversely funny. It was easy to disapprove of James’ selfishness and ignorance, but hard to resist enjoying his bizarre energy (LaBeouf’s interpretation recalls the dirtbag charm mastered by Matthew McConaughey). In these scenes, the discomfort is effective — audiences understand why Otis is drawn to his father and why that relationship could be so volatile.

In later, more gratuitous scenes, this tension is less effective. FKA Twigs has a supporting role as a prostitute who lives across the street who develops a relationship with young Otis. Their scenes, which are charged with unsettling sexual energy, are weak points of the film. “Honey Boy” has no idea what to do with Twigs’ character, and she becomes an amalgamation of stereotypes designed to aid the main character’s development. As “Honey Boy” escalates into more gratuitous content, it loses sight of its characters and any meaningful context.

In an interview, LaBeouf said, “It is strange to fetishize your pain and make a product out of it and feel guilty about that … The whole thing felt very selfish.” While this is a harsh self-assessment, you can almost see what he means — the more upsetting moments, though they are presumably based on fact, feel manipulative onscreen.

Still, “Honey Boy” has enough smart ideas to suggest an interesting path forward for LaBeouf, and a trio of strong performances holds the film together. Hedges continues his streak of emotionally raw performances in complex films, while Jupe is especially gripping in a difficult role — he fully maintains the audience’s sympathy while still giving a daring, fully realized performance. His work has a maturity and honesty that is impressive and frankly, a little alarming. In twenty years, watch out for his own autobiographical drama about the perils of child stardom.