Daniel Theriault: A Leader in the Pool 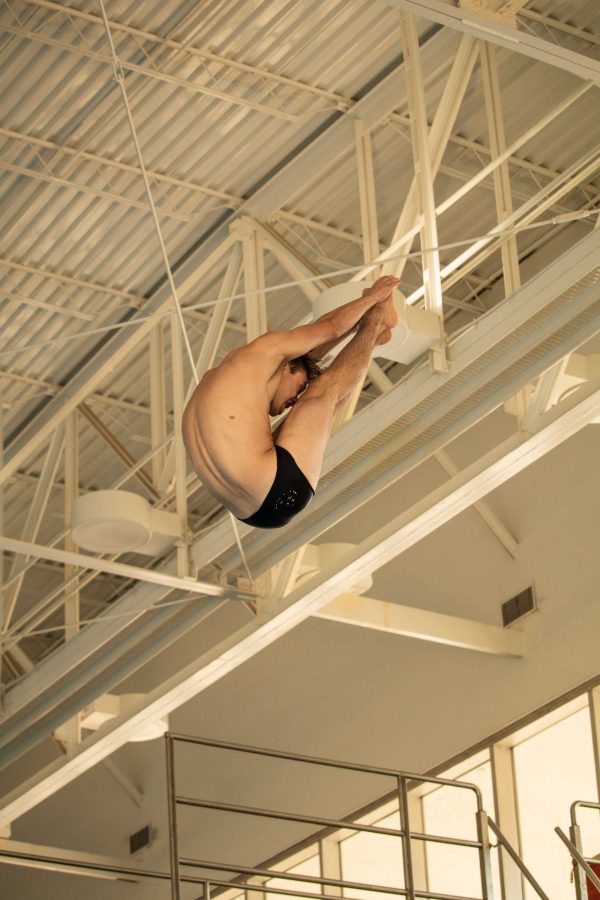 At the University of Utah, one in ten students study abroad during their time in school. This is a unique experience for students to spend a semester or a year in another country.

According to the learning abroad office, students who study abroad “secure a job faster after graduation, earn a higher starting salary, and develop intercultural and interpersonal skills that prepare you for career progression and promotion.”

However, it is rare that we talk about those students who have chosen the U as their permanent study abroad destination. There are many individuals on this campus who are completing their degrees in full on the campus in Salt Lake City, as opposed to their home country.

Daniel Theriault is one of those individuals. A native of Winnipeg, Manitoba, Canada, Theriault is in his fourth year in Utah. He is currently a captain on the swim and dive team, and he is completing a double major.

Theriault is aiming to get a degree in both political science with an emphasis in international politics and a second degree in French.

Growing up in Canada, Theriault was raised in a french speaking community. Because of this, he learned French before he learned English, and both sides of his family speak French.

Theriault joined the swim team in Jan. 2016, and he will graduate at the end of this upcoming summer semester. After graduation, he is hoping to do a fall internship in Belgium. In the future, Theriault is planning on getting his masters degree in international relations, and then either a Ph.D. or going to law school.

With his degree, Theriault’s goal is to work with the United Nations on behalf of Canada. His background in the French language and politics will help with accomplishing this goal.

Theriault has been competing on the swim and dive team throughout his entire time at the school, and he has made just as much of an impact on the program as the program has made on him.

“The thing that has meant the most to me was the ability to have a unique experience studying abroad and having a family through athletics and the swim and dive team,” Theriault said. “Having this experience that changed my life was important. I didn’t know what I wanted to do when I came to school, but I found something I loved and I am lucky that things have gone so well for me here. I am grateful for the way that Utah changed the trajectory of my life and for the opportunities that it has given me.”

Apart from finding a path of study that he loves, Theriault has also stepped up as a leader both in and out of the pool. One of the most important things that Theriault has picked up in becoming a captain is the ability to celebrate himself, but also celebrate his teammates and the successes that they are experiencing.

Diving head coach Richard Marschner shared that Theriault has been an integral part in getting the team up and moving both at practice and during meets. He is the voice of the coaches, when need be, and he is always working to keep a positive attitude at all times.

“He just sets a good example,” Marschner said. “He is really motivated and he is very appreciative of this opportunity that he has been given here. He keeps things in perspective and he doesn’t take things for granted or feel entitled to anything. He makes sure that he works hard for everything that he gets and he knows that this is a privilege and not a right. He makes sure that everyone stays grounded and he just works hard. He leads by example and does the right things.”

Competing in the sport that he loves has made the experience here in Utah even more rewarding for Theriault, and now that his time on the team is coming to a close, he is working hard to absorb every last moment of it.

As a diver, Theriault has hit some milestones in this final year as a Ute. He recently achieved a personal best during a November meet in Missouri, and he also set a school record on the platform. With that weight off of his shoulders, he can focus on achieving the smaller goals while still enjoying his last few months of competitive diving.

One of the most rewarding moments from the Missouri meet for Theriault was being able to share his exciting accomplishment with his teammates, but also with his coach who has believed in him the whole way and who is someone that he looks up to immensely.

“The whole time I was competing, I knew I was doing my best, and seeing my teammates and coaches down below cheering for me was amazing,” Theriault said. “Afterward, they all hugged me and some of us were tearing up. It was great to have the moment of knowing that I finally did it, and seeing my coach be proud of me was very important to me. He saw my potential and took the chance of bringing me onto the team and it meant so much to make him proud of me. That was the defining moment of my career here at the U.”