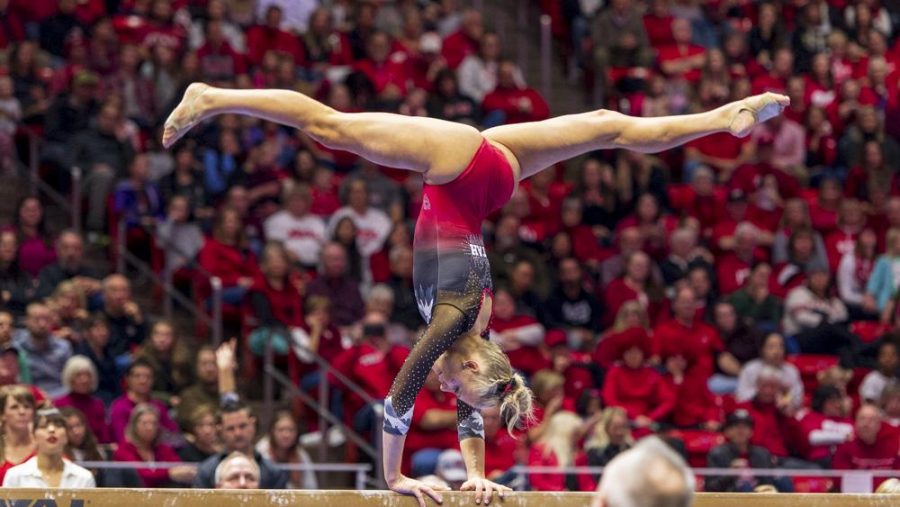 The team started the meet off with a great lead on vault from Kari Lee. Lee scored a 9.875 to tie her season-high score on the event. Following Lee was Macey Roberts who scored a 9.825.

Alexia Burch was next to the vault. After sticking her landing, a look of pure shock mixed with excitement crossed her face. She scored a season-high 9.90. This was also a career-high score on this event for Burch.

“Vault, I thought was really good in terms of coming out of the gates, and not our strongest performance on vault but definitely a good one,” he said.

The team headed over to the bars for their second rotation. Lee led off on the event again and scored a 9.800 on a solid routine. Hunter Dula hit the bars next and managed a career-high score of a 9.800. Dula wasn’t the only Red Rock to score a season-high on the event, Tessen who followed Dula scored a season-high of 9.875 on the event.

Merrell-Giles was next on the event and she scored a 9.900. Following her was Missy Reinstadtler who only competed in the bars due to an injury. Even though she had a hop on her dismount she still scored a 9.825. Rounding out the bar rotation was Skinner who came out with a 9.900 as well. Utah scored a total of 49.300 on this event.

The balance beam woes continued for the team tonight as they didn’t reach 49 points on the event. They were just shy, scoring a 48.925. For the second week in a row, Burch fell off the beam and scored 9.075. Trying to rebound from that was Shannon McNatt who scored a 9.600.

To Farden, the beam situation the team has had this season is frustrating because the girls seem to be overthinking what they are doing during competition and not during practice.

“That’s five meets and I know we have had a fall in each and what is frustrating is I don’t see that at practice,” he said. “Practice and competition are supposed to be the same, you compete like you practice and practice like you compete.”

The crowd, as well as the Utah coaching staff, blew up with excitement as Randall scored a career-high of a 9.950 on her floor routine. To Randall the routine was just what she had been working for since the start of the season.

“I’ve been working really hard to make my floor better than what I started out with and once I had finished my floor routine, all I could think about was ‘wow all your hard work paid off,’” she said.

Skinner did not compete in the All-Around category for the second time in her career. She was being held out as a precaution due to an ankle injury.

Winning the individual events for the team was Randall on the floor, Burch on vault, Lee on beam and Skinner and Merrell-Giles on bars.

Utah will be back in action next Saturday, Feb. 9 to take on No. 18 Cal, at the Jon M. Huntsman Center.