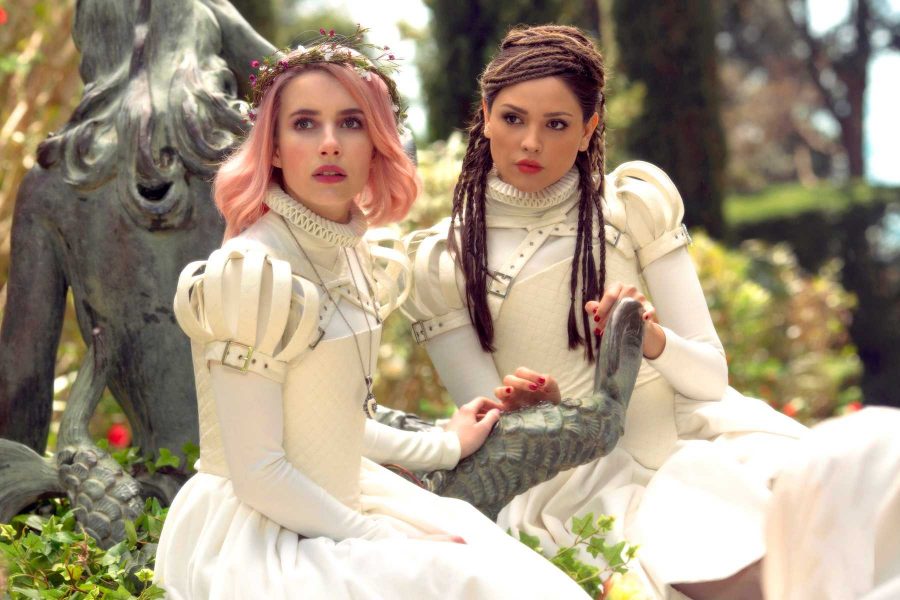 In the opening scene of “Paradise Hills,” a young bride, with her enormous veil extended like a spider web, sings a ballad of feminine subjectivity. She sings lines about self-sacrifice and undying devotion — at one point promising, “I’ll cater to all your needs” — while her face is disguised in a decorative cage. It’s both ridiculous and unsettling, heightening the stereotypical gender dynamics of a wedding with eerie fanaticism. When this unnamed woman goes upstairs with her new husband, she is more fearful than elated. She lies down on the bed, he leans in, and she involuntarily turns her face away with a lip upturned in disgust.

The ambitious but frustrating “Paradise Hills,” which debuted at the 2019 Sundance Film Festival, backtracks to reveal how this particular woman got to this particular wedding. Audiences learn that her name is Uma (Emma Roberts), and several months earlier, she woke up in a strange boarding school-esque facility vaguely described as a “center for emotional healing.” Uma has no memory of traveling to the facility, and she is essentially imprisoned there at the behest of her mother. Soon, Uma learns that all of the women in the center are there to reform some “unpalatable” part of their personality. She befriends Southern pageant reject Chloe (Danielle MacDonald), the anxiety-ridden Yu (Awkwafina) and Amarna (Eliza Gonzalez), a pop star under constant corporate control. Soon, the women attempt to escape their island prison as they slowly learn the true nature of her new home.

From the opening scene, “Paradise Hills” establishes a cohesive, arresting visual language. The production design by Laia Colet and cinematography by Josu Inchaustegui revel in the beauty of the island setting, juxtaposing the stately architecture and pastel colors with the disturbing directions of the narrative. The costume design from Alberto Valcarcel shrewdly extends the film’s interest in restrictive gender roles — the entire boarding school is dressed in a virginal white wardrobe of veils and corsets, which add another layer of imprisonment. Director Alice Waddington has a knack for potent visuals, and at its best, “Paradise Hills” produces imagery that is both striking and thematically rich.

Unfortunately, the screenplay of “Paradise Hills” (from Brian DeLeeuw and Nacho Vigalondo) is not nearly as well crafted as its cinematography. The narrative, which is part fairy tale, part dystopian science fiction, and part psychological horror, hints at some interesting ideas, but it never hones in on any coherent narrative. The film touches on patriarchy, class, technology, body image and mental illness. In a more focused movie, this combination of themes could feel rewardingly expansive — here, it just feels underdeveloped. In a Q&A after the film, an audience member called the story a commentary on cloning, and Waddington corrected her, saying that it was actually about immigration. Both of these interpretations are equally valid, but the debate is ultimately pointless — “Paradise Hills” is never able to make insightful commentary on either topic. After one too many plot twists, my patience as a viewer was officially spent. Like a too-tight corset, “Paradise Hills” is a beautiful object that quickly wears out its welcome.

The promising ensemble cast is unable to salvage the film. Macdonald, Awkwafina and Gonzalez are not given much to do, and Roberts struggles with the frequently corny dialogue and the film’s shallow characterization. For a film that presumably criticizes the subjugation of women, most of the female characters are comprised of tired stereotypes. “Paradise Hills” is more interested in genre experimentation than deeply examining characters and society. It is always exciting to see a filmmaker willing to try something new, and several moments of this film suggest that Waddington has real talent. Hopefully, that talent will be realized in a more cohesive, thoughtful project the next time around.