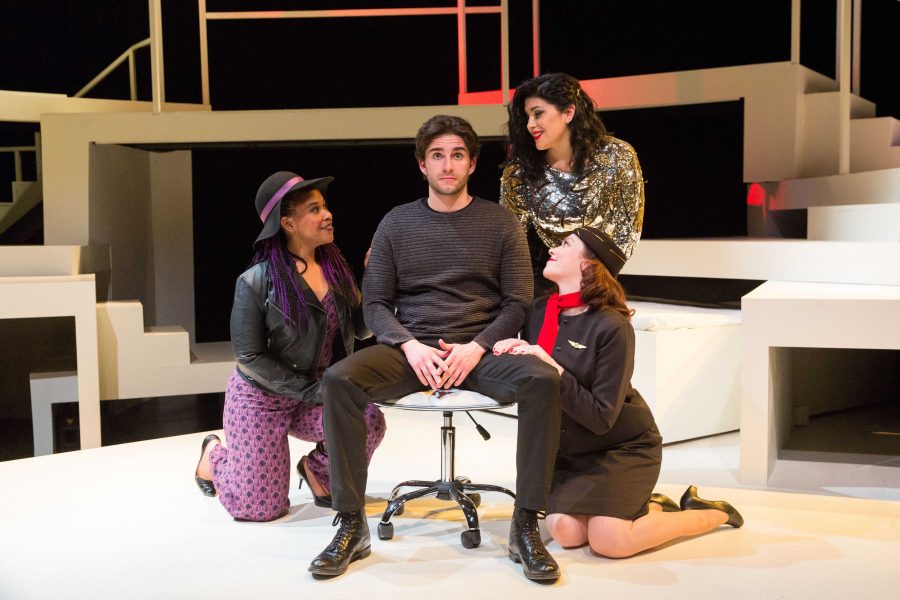 Courtesy U of U Theatre Department.

The University of Utah Department of Theatre’s production of “Company” is a playful, mature breath of fresh air. This slightly modernized version of Stephen Sondheim and George Furth’s musical comedy, which originally premiered in 1970, is about marriage and it’s worth during the Silent Generation of the 1960s, “where the nuclear family [was] being redefined” and divorces started to become commonplace. This version is targeted more toward millenials — as Bobby (Derek DuBay) contemplates what one gets out of marriage, he reflects a current generation that either puts off marriage or forgoes it entirely.

The cast of characters is made up of different couples and single people who vary in age. Bobby is a bachelor turning 35 and looking for love. He is accompanied by his friends, including five couples and three love interests. By hanging around all the couples, audiences get an insight into what marriage is or could be like.

Chloe Mason, the costume designer, does a wonderful job of defining each couple to the audience, showing the characters’ personalities through color-coordinated 1960s attire. For example, the spicy “Chad and Stacy” type couple, Amy (Caitlin Rae Campbell) and Paul (Patrick Ryan Castle) are both dressed in red in semi-high class fashion while Joanne (Hayley Cassity) and Larry (Cameron Holzman), an upper-class couple in a love-hate relationship, are dressed in a more modern stylish darker yellow. The impressive set by Kyle Becker is its own jungle gym crafted to be versatile inside the compact Babcock Theatre, where the space harbors both the characters’ individual homes and an orchestra. The lighting setup was also cleverly embodied in the set that helps represent each couple and their homes with their assigned colors.

The entire cast of this production gave remarkable performances. The mini orchestra, made up of nine talented individuals, switched between instruments in order to capture the music’s beautiful array of emotions. While the actors’ and actresses’ vocals were consistently on queue, Sheradin Jansen, who plays Jenny, and Campbell particularly stood out. Jansen’s strong vocals were the highlights of many songs, while Campbell combined her vocal abilities with the real emotions of her character in the song “Getting Married Today,” a bridal meltdown of indecision.

“Company” was guest directed by Ryan Emmons, a freelance director and a resident and assistant on Broadway. This musical was a winner in my book. The show was funny, heartfelt, and more realistic that I thought it would be. Each relationship was an honest mix of individuals melding, missing connections and trying to make it through, and plenty of audiences will relate to Bobby, the odd one out who has yet to discover what he truly wants. Go see this show and be filled with hope and awe — you will leave wanting to know what happens next for the characters and yourself. This is the kind of show that makes you want to view it again in order to observe the overwhelming production and details, and in the process, you may want to do some digging into your true self and your relationships.

“Company” continues through March 3 with showings Wednesday through Sunday. Tickets are free for students at the U with a student ID. For more information, visit theatre.utah.edu. This is definitely a show worth seeing for all generations.