Starting From the Bottom: Improving Women’s Equality in Utah 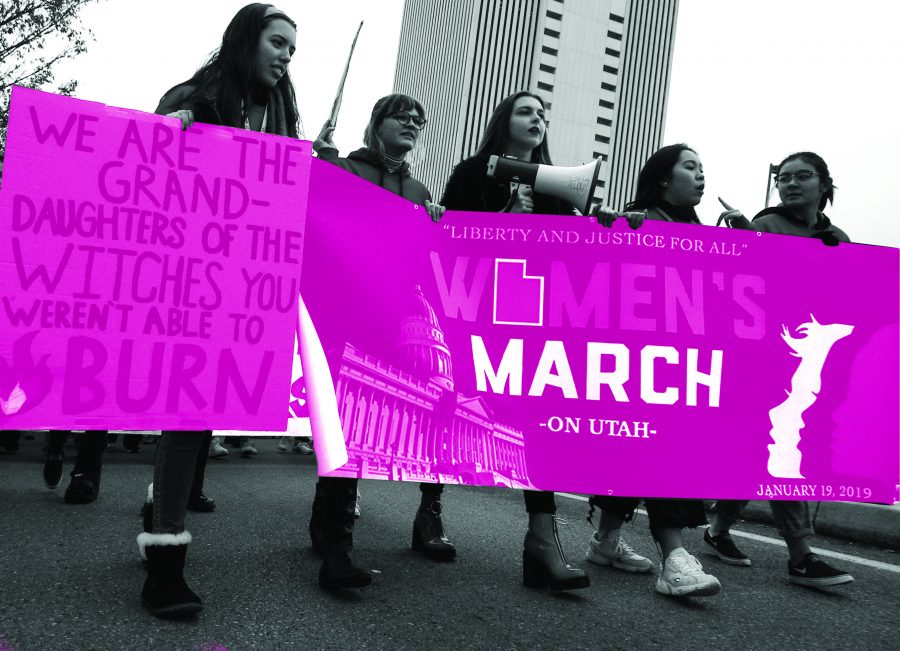 The 2018 WalletHub.com study ranked Utah as 50th on measures of women’s equality based on gaps between men and women in the workplace, education, health and political empowerment. These dimensions were further broken down into 15 key metrics, showcasing disparity between the sexes. Utah showed a sizable difference between men and women in income and placed 46th for the largest executive position gap, 48th for the largest work hour gap and 43rd in political representation.

Despite these statistics, Utah is improving in terms of women’s equality.

“There have been some excellent wins for women’s leadership in recent months,” said AnnaMarie Barnes, a junior studying political science. “We currently have the highest percentage of women elected to the state legislature in Utah’s history, as well as the second elected female Salt Lake County mayor, Jenny Wilson.”

While 24 percent of the Utah Legislature are women — which equals 25 of the 104 members — the national average is around 28.5 percent, according to the National Conference of State Legislatures.

“Two major higher education institutions in the state, Utah Valley University and the University of Utah, have female presidents at their helm for the first time ever,” Barnes said. “It is clear that Utahns are ready for strong female leadership.”

Martha Hughes Cannon, the first female elected to the state Senate, will also be getting her own statue in the U.S. Capitol Building’s National Statuary Hall. Last year, the Utah State Legislature passed a resolution to replace Philo Farnsworth, the inventor of the television. Cannon joins Brigham Young in representing Utah. Of the 100 statues currently in the hall, only nine are women.

Although 2018 was touted as the “Year of Women,” with impacts from the #MeToo movement and an unprecedented number of women elected to U.S. Congress, it is only the beginning for many. Business and higher education fields still face heavy criticism.

“Having representation in leadership roles is a great start to accessing gender equality,” Barnes said. “However, there needs to be societal and institutional change taken to capitalize on this progress. That starts with policy. In a state which consistently holds the highest birthrates per capita, working mothers should feel supported and empowered. I believe the University of Utah should start by expanding current childcare services for faculty, staff and students. They should also implement longer paid maternal and paternal leave.”

“We march for women whose dedication to their families is questioned because they want to serve their communities,” Biskupski said. “We march for every pantsuit the press deemed ‘unbecoming,’ and we march for every woman who the media declared ‘too unlikable.’”

On Jan. 31, a bipartisan bill to allow political candidates to use campaign funds to pay for childcare for state passed out of the state House of Representatives. The bill’s sponsor, Rep. Craig Hall, R-West Valley City, said that no one should be eliminated from running for office because they’re worried about how to care for their children.

It also appears that many Utah corporations are increasingly invested in changing the negative narrative regarding Utah women in business.

“I think there is more talk about women’s inequality in business recently, and that’s the first step in invoking change,” said Carly Ho, a senior studying business administration and biology. “People need to believe there really is inequality. I have talked with people who either don’t believe that inequality exists or believe inequality is what’s right. To show prominent people in our state the facts and figures to make a convincing argument that women’s equality is a right and should be protected is the first step. I honestly don’t believe the people leading this state believe there is a problem with women’s equality in Utah as it is now and that’s a problem.”

As a student in the David Eccles School of Business at the U, Ho has experienced this imbalance in gender equality and observed that “typically, women are employed in secretarial or administration jobs whereas a majority of my professors have been male. This is also typical among the students at the business school, especially the closer you get to completing your degree. Now that I’m about to graduate, a majority of my peers are married white men that are older. It may be due to the degree that I’m pursuing or this state’s culture, but there definitely is a big difference.”

There are several resources for women at the U, and the following is by no means a comprehensive list.

The Women’s Enrollment Initiative is designed to recruit, retain and graduate women through a network of support that provides opportunities and creates innovative partnerships that positively impact the full range of experiences for women as they pursue their educational and professional goals.

Students can register for the Women’s Leadership Summit which is taking place at the U on March 5. This annual conference is free for students and aims to help women to feel more confident as leaders by helping them to build valuable skills and support networks. The program will include a keynote speaker, program sessions and the opportunity to network with others interested in supporting women’s leadership.

The Department of Chemistry’s Curie Club for women in STEM is made up of individuals committed to the advancement of science and to creating opportunities for women to make an even greater contribution to medicine, scientific research, environmental solutions and entrepreneurial innovation.

Barnes recently shared her experiences as a woman in student government and discussed the importance of women in student leadership during an ElectHER event hosted by the Hinckley Institute of Politics and ASUU. ElectHER is a program that works to train young women to run for public office.

“Part of ASUU includes a diversity board where students work to provide a plan of action to support underrepresented groups on campus,” Amaechi said. “There are other groups like It’s On Us who are dedicated to supporting women through different means. Their mission is to stop sexual assault on campus and being that an overwhelming majority of these victims are women, the program may be slightly more geared to aid that population.”

Among the members of The Society of Women Engineers (SWE) at the U is Kathryn Jones, a senior studying chemical engineering and chemistry. Jones described the organization as “instrumental in [her] success in college so far.” SWE focuses on building a community for women in the College of Engineering.

“It’s so beneficial to have a group of people to lean on when life is difficult,” she said. “They become your support system not just because they know you or care about you, but because they’ve been there before. For me personally, SWE became my family on campus.”

Jones said, “At this point, there isn’t that much more the university itself can do. They have policies that protect women from discrimination. They provided the Women’s Resource Center for support. They actively encourage clubs like SWE and programs like the ACCESS Program to continue supporting women. Really, the changes that are going to help women succeed need to come from the culture. Now the fight has shifted from institutional policy toward eradicating the concept that gender has an effect on the skills, abilities or potential of a person. And, unfortunately, the culture changes are the hardest ones to implement.”

For some students, including sophomore economics major Jack Markman, “The challenge in addressing many of these inequities is that the prevalence of the gendered Latter-day Saint theology in Utah has caused an internalization of sexist attitudes within the mindset of Utah women.” He added, “Many don’t seem to care they are being paid $0.70 to a man’s $1 because men are supposed to be the ‘primary breadwinners.'”

Markman feels it would be difficult to change this cultural norm.

“What I think can, and is being done, is best built on cultivating awareness of the issues in this religious community. Women’s marches, more prominent and numerous female politicians, increases in female-sponsoring scholarships for higher education, movements such as Ordain Women and well-publicized studies on gender disparities in this state,” Markman said.