U Campus Once Again Targeted by Racist Propaganda 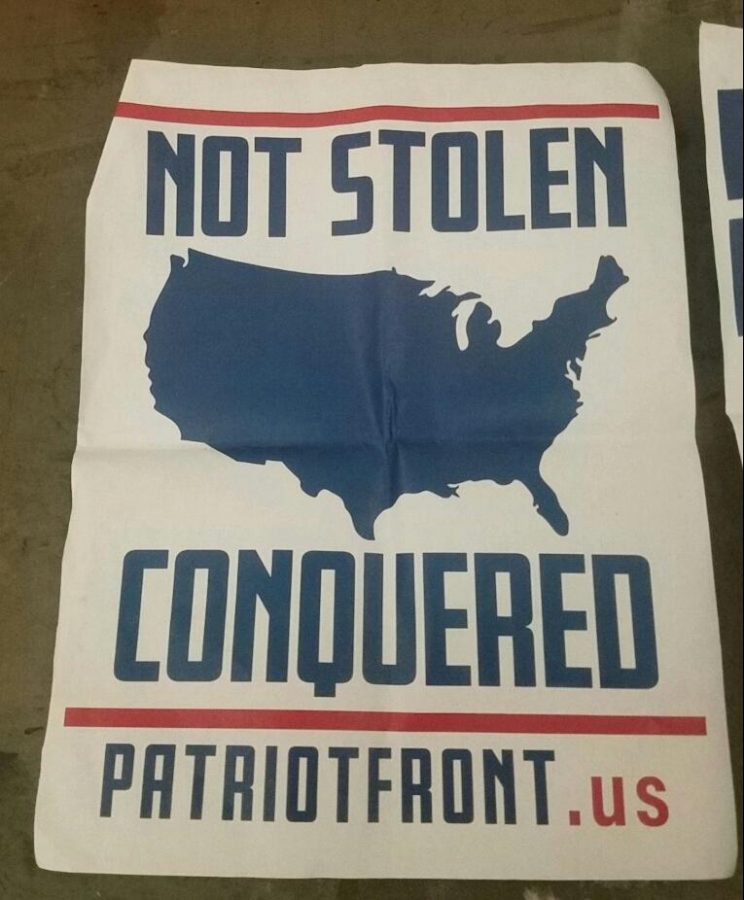 The University of Utah campus was once again targeted by white supremacist propaganda, Mohan Sudabattula told The Daily Utah Chronicle in an interview held on President’s Day. Sudabattula, a student at the U who works for on-campus student housing, said that he discovered, photographed and took down racist posters on the night of Wednesday, Feb. 13 outside of the east entrance of the Arts Building located at 375 S 1530 E.

The U student tweeted images of the posters on Sunday, saying that he no longer feels safe on campus. Sudabattula wrote, “Action needs to be taken.”

The posters showed the logo of Patriot Front, an organization categorized by the Anti-Defamation League (ADL) and the Southern Poverty Law Center (SPLC) as a hate group. The white supremacist propaganda read “Not stolen, Conquered,” a reference to the group’s ideology that glorifies the history of colonization, massacres and the disruption of Native American civilization and culture by European settlers.

Sudabattula says that this ideology is particularly troublesome at a university which calls their sports teams “Utes” and boasts a drum and feather as their logo. The U holds a Memorandum of Understanding with the Ute tribe to allow for this.

This is not the first time that racist propaganda has surfaced on campus. The same group was also responsible for hanging a banner from the Legacy Bridge in January, during the same week that stickers from Identity Evropa (IE) were discovered on campus. Racist posters were pinned to various locations on campus in August of 2017 by Vanguard America and the construction at the Gardner building was vandalized with a racial slur in that same year.

The U administration has released statements condemning these groups’ messages in the aftermath of each incident. Following an action taken at the Block U last week by members of Identity Evropa, another SPLC and ADL designated hate group, U spokesperson Chris Nelson told The Chronicle that the administration was keeping an eye on the activities of these groups.

Sudabattula says he was previously involved with the reporting of other such propaganda on campus but says that this time he has decided to make the information available to the public as opposed to reporting only to the administration.

He feels that the U administration has not taken a hard enough stance. “The U needs to do a better job of one identifying these individuals,” Sudabattula said, adding that he believes “It’s come to the point where there needs to be some kind of disciplinary action.”

Sudabattula, whose family hails from India, says that although he does not feel personally in danger, the message that “people who look like [him] do not belong on campus” is “very distressing and disruptive to the learning environment.”

Although IE and Patriot Front claim to be separate organizations, both have twice posted white supremacist and anti-immigration propaganda on the U campus around the same time. Patrick Casey, the self-identified executive director of IE, told The Chronicle last week that the events were unrelated and that the groups are not associated.

Patriot Front is reported to have strict membership guidelines that prohibit involvement with other groups. 19-year-old Thomas Ryan Rousseau founded the group after branching away from Vanguard America — another designated hate group — of which he had been a leader.

Vanguard American and IE were both heavily involved with the Unite the Right extremist rallies that took place in Charlottesville in 2017 and left many counter-protesters wounded and one dead after a member of Vanguard America, James Alex Fields Jr., drove his vehicle into a group of people.

Vanguard leaders have since attempted to paint Fields as a non-member, but photographs have shown him wearing the group’s logo while marching side by side with other members of the group, including Rousseau.

Both Casey and Rousseau have since re-branded their groups to accomplish what Rousseau calls “fence sitting”— coaxing those who are unwilling to outwardly be associated with white supremacist ideologies into their fold.

Casey told The Chronicle last week that he is not racist but rather an identitarian who advocates for peaceful action promoting a white supermajority.

Despite these groups’ attempts to re-brand, neither Casey nor Rousseau admonished the violent actions of their groups’ former members.

During demonstrations in Berkeley, California, Nathan Damigo, the previous leader of IE, was caught on video punching a young woman and during the deadly Unite the Right rally and he was also filmed charging at riot police. Another former IE leader, Eli Mosley, was filmed on the phone with police saying that he would unleash 200 of his “people with guns” on the counter-protestors if they did not intervene.

Casey told The Chronicle that neither of these members were currently associated with IE but that their actions had been “in self-defense, therefore not violent.”

Following the Unite the Right rally, the SPLC reports that Rousseau told members of Vanguard America through a post to the group’s server that “The statement [issued by Vanguard America about Fields] never said that what he did was wrong.”