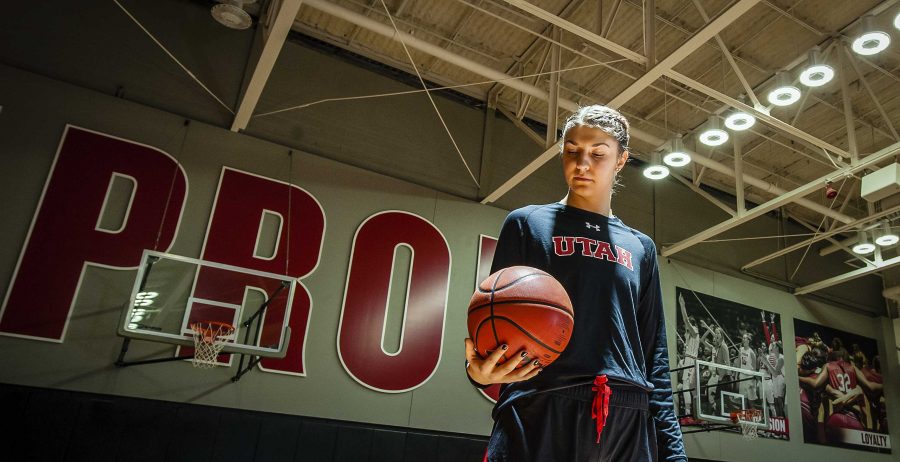 Every year, the University of Utah student athletes graduate from their Pac-12 sports teams. Some of these athletes leave their sport behind while some take their game to the next level with professional teams across the world.

Emily Potter was one of the driving forces on the women’s basketball team last year and in all four years she was a Ute. This 6-foot-6-inch forward dominated the court and she was named Pac-12 All-Conference honorable mention during her last year. She set the school record for career blocks with 270 and she was the first player in Utah history to have 1,500+ blocks, 900+ rebounds and 200+ blocks over her career.

After graduation, Potter had the chance to attend training camp with the Seattle Storm, a Women’s National Basketball Association (WNBA) team out of Seattle, Washington. Unfortunately, Potter was not selected for the team, so she returned to her hometown of Winnipeg, Manitoba, in Canada.

Potter competed with the Canadian national basketball team over the summer and left to play for Poland at the end of the summer. She spent three months traveling and competing with that team before she suffered a leg injury and returned to Canada for surgery and recovery. Since she is not competing professionally for the time being, Potter is taking her time off during recovery to expand her influence to the community in which she grew up in.

“Where I was raised, Winnipeg, Manitoba, I hadn’t really done a lot in the community with the kids before. Now, I am working in schools every day, and I go to a different elementary or junior high school every day, and I just play basketball with the kids, let them ask questions, anything they want to know about me,” Potter said. “It’s been super fun, it’s a new batch of kids every day, it’s never boring and they have a lot of energy. It’s been super good and I’m just trying to get more interest in the sport in the city that I live in.”

In addition to promoting the sport that she loves, Potter also has the chance to coach with the varsity team at the high school that she attended.

Much of her community service volunteering work is centered around kids and getting them outside to be active. Potter mentioned that basketball is certainly gaining popularity in Canada even though it is still in the shadows behind hockey and other ice sports. Potter’s push for basketball is backed up by the fact that it is not an expensive sport to play. All you need is a pair of shoes, a ball and a court, whereas hockey can be an expensive sport to play and participate in.

“They are super funny sometimes,” Potter said. “But there have been some really good questions like ‘why do you play basketball?’ or ‘why do you love it so much?’ and I think that’s a good question, and I just love playing the game, I love playing on the team,” Potter said. “I try to promote the idea that it doesn’t have to be basketball that kids love, just find something that you love, hopefully something that keeps you active. Staying in shape is important but having a passion for something is good.”

In addition to helping out with young kids, Potter has also become an advocate for mental health awareness. During her senior year at the U, Potter published a piece with The Daily Utah Chronicle which brought to light her own struggle with depression. Her writing strived to open up the conversation that we are having around mental health. Specifically, it talked about athletes and their mental health, both on and off the court.

“As an athlete, we always talk about physical health, but not so much the mental side,” she said.

Potter is at the head of organizing a fundraiser in her hometown with a close friend for someone that she lost a few years ago. All of the proceeds from this event will go to mental health education and awareness. Potter’s platform as a professional athlete has helped her to jump start all of the work that she has been doing during her recovery period.

“I’ve done stuff that no other athletes have done in Manitoba, so that gives me a little bit of credibility to be able to use my platform, obviously in basketball, but now I can use it in other ways for mental health or for whatever issue or thing I feel strongly about I can hopefully raise awareness about and hopefully people will listen,” Potter said.

The conversations that Potter is trying to start as far as mental health awareness are significant both in athletics and in personal life. She wants to stress that it is important for individuals to be well-rounded and confident in themselves.