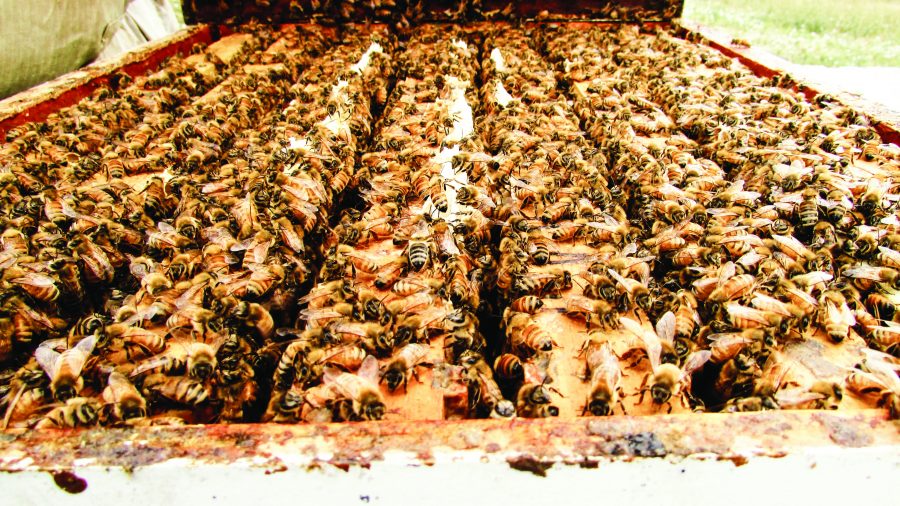 The Marriott Honors Community (MHC) will be installing an artificial beehive during the spring semester. The hive is expected to be the most innovative and academically engaging of its kind on campus.

The two “Flow Hives” are coming to the University of Utah as part of a program headed by Bridget Dorsey. A junior at the U and a member of the campus beekeeper’s association, Dorsey got the idea for the new hives by way of a discussion with Honors College professor Christopher Mead. “He [Mead] just mentioned that he had been reading a lot about bees and asked, ‘Do you want to get some hives for the Honors College?’” Dorsey said. From that point, she launched the program independent of the U’s Beekeeper’s Association with the help of a small team.

Flow Hives provide a stable beehive ecosystem while also streamlining education and awareness to students. The hives have an observation window that is accessed by removing wooden slats in its frame. This makes observation easily accessible for a wider audience, as observation with other hives located on campus supports a limited number of observers at once. Besides the advantages that it offers to bee researchers, it is far less intrusive to the bees themselves. This is especially true with honey extraction. With the comb inside the frame, a rod called the “key” is inserted through the top and turned, which shifts the whole frame and drains the honey.

This is a relatively new process and may create a future dilemma for the bees. The bees will work in an entirely new system. The combs inside of the Flow Hives will be entirely artificial. The elimination of creating combs as an aspect of bee behavior may have unintended consequences to a future species’ evolution. This means that students can play a role in understanding the interaction between bees and human tampering. “It could lead to research opportunities,” Dorsey said.

The hives are coming via funding from the Sustainable Campus Initiative Fund (SCIF), a grant meant to facilitate student-led management projects to increase campus sustainability in collaboration with departments across the U. Dorsey was grateful for the help she received from SCIF coordinators.

“It was very intimidating, it was never a sure thing that this project would receive grant funding. I think the fact that it was semi-independent from other SCIF funded projects related to beekeeping was a major factor in getting approval,” she said.

The U’s Beekeeper’s Association has procured upwards of $30,000 of SCIF funding to date. “Which has really been awesome,” Dorsey said. “But it really raised the stakes for getting approval for this particular program.”

“In total, the grant secured us $3,000 for the project,” said Paul Baskin, a resident of the MHC who also helped with the Flow Hive project. Baskin has been beekeeping for years on his own and is excited for the environmental awareness projects like this generate on campus. He and Dorsey also were encouraged by the involvement of the Australian-based company that is providing the hives, Flow Hive.

“They [Flow Hive] will actually be donating one of the hives free of charge,” Baskin said. Both hives are of top-tier quality and cost $800 each. The second hive will be secured through SCIF funding, which finalized approval for the project in November 2018.

“The hope is also to encourage interest for local startup endeavors in Salt Lake,” Dorsey said. “We will be installing the largest and fanciest versions of these hives. There are many options for individuals that are way less expensive.”

The project is now finalizing equipment orders through Flow Hive. Construction of the hives at the south end of the MHC will continue through the semester, with expected completion at the beginning of April. At that time, boxes of bees will be inserted into the hives to begin work. Bees ordered for other hives on campus are productive and docile with hives that are seeing relative failure still maintaining a small population. There will be a kick-off event to celebrate the completion of the project in cooperation with Flow Hive. From that point, the hope is that the bees can maintain a community through generations of instinct. The production of honey will take a while. A complete batch likely won’t be ready for at least another year.

At that point, the other possibilities for student engagement can be pursued. “Professor Mead will actually be including the hives in his curriculum, along with other developing SCIF funded projects on campus,” Dorsey said.

Ultimately, the hope for the project is to expose and inspire the U’s environmental community. The project exemplifies student initiative, with members encouraging interested students to take charge of their own projects. “Have a good idea ready before-hand,” Baskin said. “The smallest details needed to be prepared to secure funding, and the whole process will take longer than you might think.”