Red Rocks Give it All But Fall to Bruins 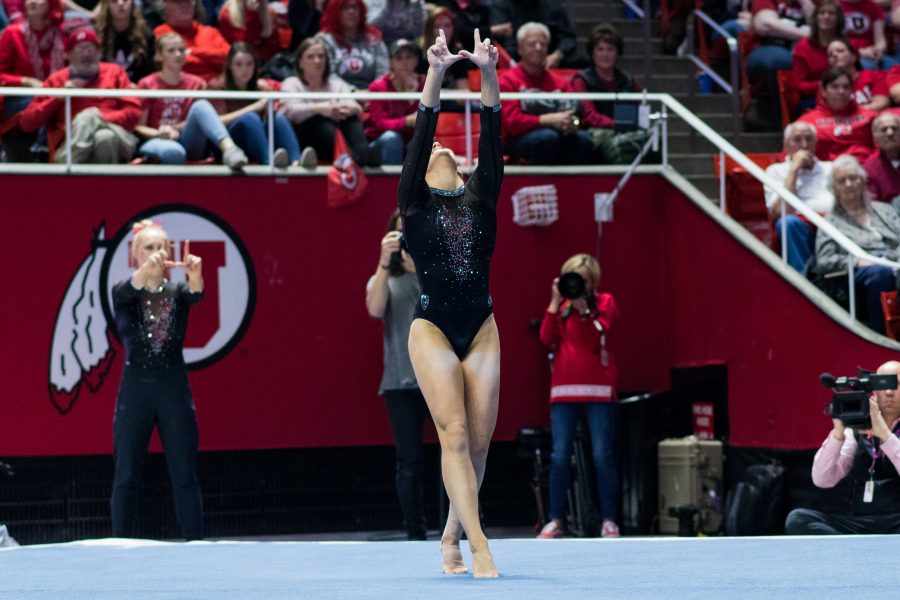 The Red Rocks started off the competition with scores in the 9.80 range coming from Kari Lee, Alexia Burch and Macey Roberts. MaKenna Merrell-Giles took things to the next level with a near perfect vault that scored a 9.95. MyKayla Skinner was also on fire scoring a 9.925. Rounding out the event for Utah was Kim Tessen, who scored a 9.900.

The bar rotation was not up to usual Utah standards as only two out of the six gymnasts stuck their landings. Up until the sixth spot, the highest score for the team was a 9.875 coming from both Merrell-Giles and Tessen. Both Hunter Dula and Missy Reinstadtler scored 9.850’s. Lee scored a 9.825 from the leadoff position. Picking up where she left off on the vault, Skinner scored a 9.95 on the event.

Heading into the third rotation, the Red Rocks took to the beam, an event that has been their Achilles Heel for most of the season. The Red Rocks showed up and showed out on the event, scoring a season-high 49.375 during their turn.

It was nice for fans to see the old Burch that fans grew to know and love last season.

“I felt like I got more in my zone,” she said. “I wasn’t thinking about beam. It felt really good to hit a routine like I do in practice.”

The Red Rocks weren’t going down without a fight heading into the final rotation. The scores were tight and the Red Rocks needed some UCLA mistakes to take the lead.

While they did get a little bit of help when UCLA’s Madison Kocian fell off the beam, Utah had a few mistakes of their own with Merrell-Giles stepping out of bounds and Randall coming up short on her final pass. Both routines scored in the 9.7 range. Routines from both Skinner and Soloski who scored 9.925’s were just not enough as the Red Rocks fell to the Bruins 198.025-197.625.

Ross of UCLA won the all-around category with a score of 39.775, but Skinner was hot on her heels coming in second scoring a season-high 39.750.

According to co-head coach Tom Farden, it was the most complete meet the team has put together all season.

This won’t be the last time these two teams meet this season. The foes will face again at the Pac-12 Championships a month from now at the Maverik Center in West Valley City.

Skinner is more than ready to see the Bruins again.

“UCLA had the fire because we beat them on their home turf last year,” she said. “At Pac-12’s, we are coming for you. Better watch out.”

But before that, the team will close out their home competition next week as they host No. 8 Michigan in a top 10 competition.