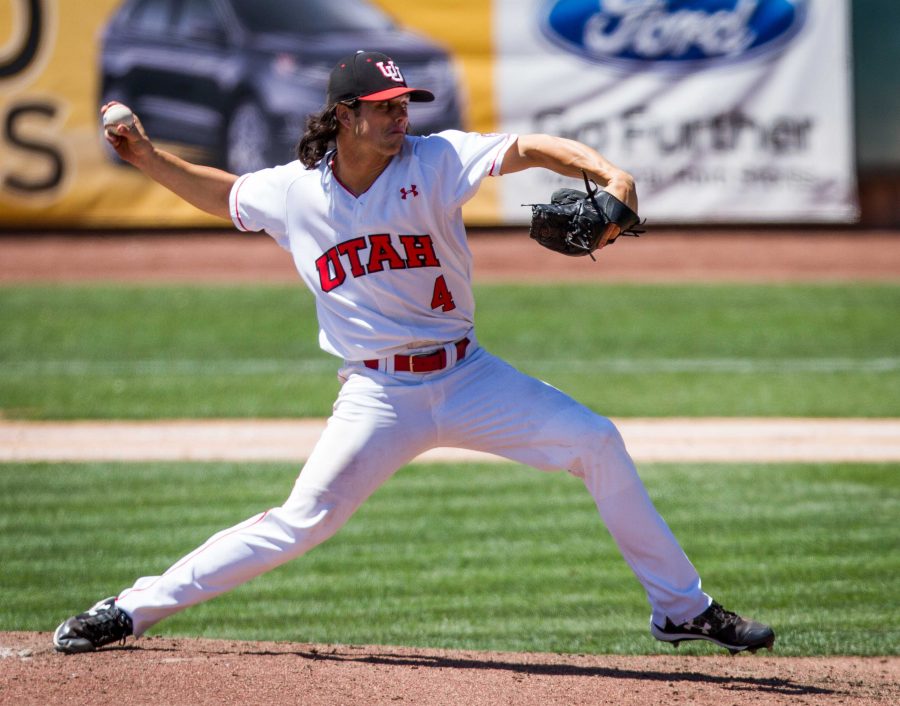 Utah’s road trip was welcomed with a cancellation of their game against Fresno State due to inclement weather on Thursday, but the Utes decided to continue the trip down the coast of California to take part in the Tony Gwynn Legacy Tournament which began Friday night.

The Utes’ first opponent was the tournament host, San Diego State. Utah fell behind in the third inning as the Aztecs pitcher Casey Schmitt singled to drive home catcher Joe Fitzhugh. Not long after, San Diego State’s left-fielder, Matt Rudick reached on an error to drive in Schmitt, putting the Aztecs ahead 2-0.

Utah and San Diego State battled defensively through the next five innings before Utah’s catcher, Zack Moeller reached on an error scoring Dominic Foscalina for the Utes first run of the ballgame. Later in the inning, Erick Migueles came through with his fourth RBI in four games by singling to left field and driving in Oliver Dunn to tie the game at two.

The Aztecs tacked on one more run in the bottom of the eighth inning to go ahead 3-2. Although the Utes loaded the bases with one out in the top of the ninth, they weren’t able to drive in a tying or winning run and ultimately fell to San Diego State in game one.

Utah pitcher Kyle Robeniol might not have gotten the win that day, but he threw a great game going seven innings, giving up one earned run on four hits and four strikeouts.

Kansas State found themselves on the board first against the Utes in game two. A Kansas State home run in the third inning sparked a four-run rally putting the score at 5-0 in favor of the Wildcats.

The Utes bounced back in the bottom half of the third inning when Migueles fouled out deep enough to score Foscalina from third base. Foscalina also came up big for the Utes again in the fourth inning when he singled to first, scoring Chandler Anderson to make the score 5-2.

Kansas State added an insurance run in the fifth inning before Utah’s Rykker Tom doubled to right field in the eighth inning, scoring Migueles to make the score 6-3. Later in the eighth, Tom scored off of a Wildcat wild pitch.

Utah dropped its second game of the tournament 6-4 behind the one run, one RBI offensive efforts of Foscalina, Tom and Migueles.

Game three against the University of San Diego was an intense one for the Utes, falling behind early 2-0 in the first inning. The Toreros pushed that lead to 3-0 two innings later.

Matt Richardson notched the Utes first hit of the day in the fifth and later came around to score after Foscalina doubled to left field.

San Diego didn’t look fazed as they tacked on two more runs in the bottom of the sixth inning moving the score to 5-2.

In the top of the seventh inning, Foscalina, Dunn and Moeller reached base with no outs before Migueles stepped up to the plate. Migueles hit a sacrifice fly, scoring Foscalina from third base and helping the Utes to chip away at the Toreros’ lead. After Kramer walked to load the bases, Tom had a clutch single off the third baseman’s glove to tie the game at five.

The Utes’ bats stayed hot in the eighth as Richardson hit a double off the wall to start things off before moving to third base on a wild pitch.

Moeller was hit by a pitch not long after Richardson’s double. The home plate umpire called strike three saying that Moeller leaned into the pitch. This call caused coach Bill Kinneberg to argue which ultimately got him thrown out of the game.

Migueles came up big once again as he singled up the middle to score Richardson, putting the Utes up 6-5 in the eighth. The Utes held on to beat San Diego moving them to 2-4 on the season.

Looking ahead, the Utes will take on UNLV before heading to Greenville, North Carolina to face East Carolina, Western Carolina and Wright State in the Keith LeClair Classic.

Utah will play UNLV on Feb. 26 in Las Vegas, Nevada. The Rebels went 35-24 last season and finished fourth in the Mountain West Conference. UNLV has started the season with a 4-4 record with two wins over the University of Seattle and one win over UC Santa Barbara and Stanford.

The Utes will take on East Carolina to open the weekend series in Greenville. The Pirates finished last season with a 44-18 record and winning the American Athletic Conference. ECU hosted the Greenville Regional in the College World Series but ended up losing to South Carolina and UNC Wilmington and was eliminated from the tournament. East Carolina has started this season with a 5-1 record with series wins over Radford and Monmouth.

Next up for Utah is Western Carolina who had a dismal 11-47 season in 2018. WCU has started off on a better foot this season sweeping Oakland in their first series of the season and going 1-1 on a rainy weekend against St. Johns. The Catamounts will face Indiana State and Wright State before taking on the Utes.

Lastly, the Utes will play Wright State in the final game of the Keith LeClair Classic. Wright State went 39-17 in 2018 and found themselves in the Palo Alto (Stanford) Regional in the College World Series. The Raiders lost to Stanford, who hosted, and Baylor and were eliminated from the tournament. Wright State has begun this year with a 2-3 record and a big opening series win over Ole Miss and another big win over Oklahoma State. The Raiders will take on Western Carolina and East Carolina before taking on the Utes on Sunday.

Utah will play at 3 p.m. against UNLV on Tuesday, 2:30 p.m. on Friday versus East Carolina, 10 a.m. on Saturday against Western Carolina and 9 a.m. on Sunday versus Wright State.