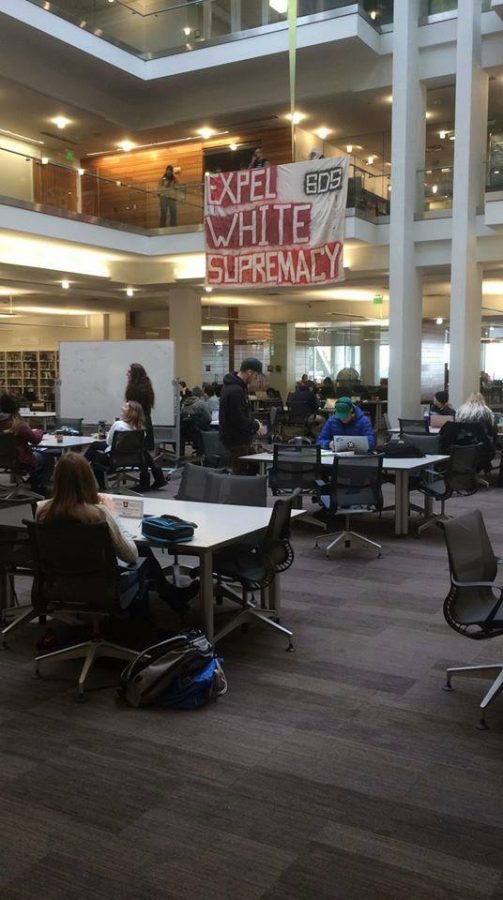 SDS holds action against white supremacy at the Marriott Library. (Courtesy of SDS).

Some University of Utah members of Students for a Democratic Society (SDS) received formal admonishment from the U administration following an action the organization held at the Marriott Library on Feb. 19.

Bryn Dayton, a U member of SDS, told The Daily Utah Chronicle that this was just one of three actions taken last week and over the weekend in response to a number of incidents involving racist propaganda on campus, held by both SDS and the Salt Lake Activist Mobilization (SLAM), an off-campus local organization.

Dayton said the action at the library consisted of hanging a banner that read “expel white supremacy” while SDS members chanted against racism and white supremacy. Another action took place the same day at the Spencer Fox Eccles Business Building from which Dayton said a banner was dropped that read “Expel Nazis [&] DHS [Department of Homeland Security].”

On Saturday, SDS shared a social media post originally created by SLAM showing a banner hanging from the Legacy Bridge that read “smash fascism.” In the post, SLAM took credit for the banner and Dayton confirmed that it had been their doing, however, the SDS member also said the two groups worked in close contact during the “creation of the banner.”

This comes only a few weeks after Patriot Front, a group designated by the Southern Poverty Institute and the Anti Defamation League as a hate group, hung an anti-immigration banner from the same bridge.

Shortly after the action at the library, Dayton said, some of the students involved and a few “who had nothing to do with it” received an email from the U administration stating that the group’s behavior had been “disruptive” and “in violation” of the U’s policies.

The email, sent by the director of Student Conduct & Community Standards, Brian Burton, stated that its purpose was to give both the organization and students involved “notice of expectations of behavior” and to make them aware of “applicable university policies related to speech and posting.”

Dayton said that the anti-white supremacist actions were a way to let “immigrant students” know that SDS will “fight with and for them” but also to let the U administration know that “if they don’t do enough about the white supremacist problem, we [SDS] will become their problem.”

Christopher Nelson, a spokesperson for the U, told The Daily Utah Chronicle that the email sent by administration was not in any way linked to the messages that SDS was putting forth, but that it was a general call to respect the student code of conduct, and that the same email would have been sent to students involved with other groups.

The email that was sent to SDS members cited various portions of the student code of conduct that had been violated by their actions, including posting messages on campus without approval.

The same portion of the code was also violated by members of designated hate groups. Vanguard America posted racist posters on campus in 2017 and more recently Identity Evropa and Patriot Front have done the same.

While the leader of Identity Evropa, Patrick Casey, previously told the Chronicle that U students had been involved in at least one action that the group took at the Block U, Nelson said that the administration is “not aware of any of our students who are involved with Patriot Front or with Identity Evropa.”

The U spokesperson added that if students had been involved with posters placed on campus by any of the designated hate groups, the U’s Dean of Students, Lori McDonald, would “certainly want to know their names.”

However, Nelson stated that the situation would be “handled in the same way” that the administration handled the SDS rally in the library. The only difference he said is that because “SDS is a sanctioned U club and the other groups are not,” it is easier to track members down.

Dayton said that “whether students are currently involved or not,” SDS wants the U administration to take preventative action by publicizing a general policy that would let students know there would be repercussion for involvement with hate groups. The SDS member stated that the group has made this demand to the U administration during a meeting on Wednesday.

Dayton said this type of preventative action is important because Identity Evropa and Patriot Front “actively engage in recruitment on campus.”

Nelson confirmed that the demand had been made but that the problem with this type of blanket policy would be narrowing down what “involvement” actually means. For example, he said, the administration could not punish students for attending a lecture given by a member of a hate group because this would be an impediment on the student’s first amendment rights.