‘An American in Paris’ Soars at Hale Centre Theatre 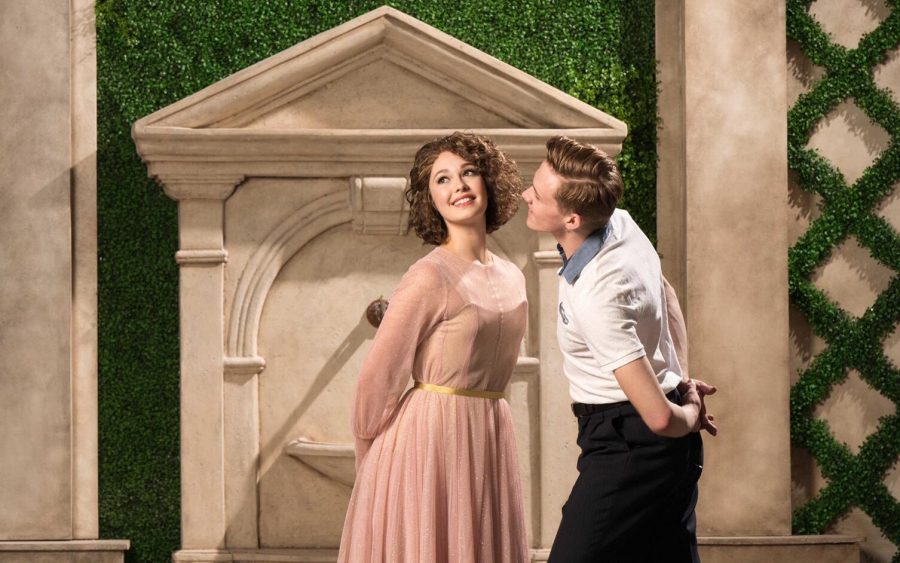 In most musicals, the emotionally charged moments coincide with equally bravura vocal performances. In “An American in Paris,” now playing at Hale Centre Theatre, the dramatic climax contains no words at all. Two dancers, blending seamlessly with a larger ensemble, perform a ballet to George Gershwin’s orchestral jazz piece, “An American in Paris,” exuding sensuality and longing in a sequence that updates the dream ballet convention from Golden Age musicals. Their movements contain more raw emotion than some musicals manage in their entire runtime.

Set in 1945, “An American in Paris” follows, well, an American living in Paris. Jerry Mulligan (Myles Woolstenhulme in the performance I saw) is an Army lieutenant who decides, on a whim, to stay in Paris after the end of World War II. He works on his paintings and quickly befriends Adam Hochberg (Andrew Robertson), a wisecracking, cynical musician and Henri Baurel (Adam Dietlein), an uptight heir and aspiring nightclub singer. Henri also falls for a beautiful woman after a serendipitous meeting on the streets of Paris. This woman is a gifted dancer named Lise (Juliet Doherty), and of course, there are complications right away — Lise is working on a ballet with Adam, who also develops a crush on her, and she is dating Henri, who is planning a marriage proposal. As Jerry also collaborates on the ballet, he balances the potential for forbidden romance while also flirting with the wealthy philanthropist Milo Davenport (Brighton Hertford).

The gentle story is not exactly action-packed, but it is quietly effective compared to the many recent Broadway hits that insist on a more-is-more approach. From the opening scene, where large Nazi flags are torn down from the streets in Paris, the musical asks how people rebuild their lives after a devastating war. The book by Craig Lucas can be a touch too simple at times — some major characters are bland even by the end of the musical — but the lack of bombast helps the emotional punches land. “An American in Paris” is old-fashioned in the sense that it’s timeless, not out-of-date.

The score, made up entirely of existing songs from George and Ira Gershwin, still retains its wit and charm decades later. The music is integrated into the narrative with surprising success and maintains an appealing balance between popular standards and jazz-inflected instrumental music. While it would have been unfeasible in the small space at Hale Centre Theatre, this music calls for a live orchestra, and the prerecorded tracks fail to capture the magic and nuance of the Gershwins’ score.

Hale Centre’s technologically advanced stage is the stealth star of the show. Plenty of musicals use a revolving turntable, but the many moving parts at the Centre Stage theater rotate, rise and fall while a lift system carries a variety of set pieces (and cast members). Even better, Dave Tinney’s direction integrates these tricks effectively into the narrative — none of the production elements feel like empty theme park thrills. The results are both large-scale and intimate. Combined with Tinney’s staging, which successfully translates to a theater-in-the-round, “An American in Paris” remains visually captivating even beyond the dance sequences.

The dance sequences, though, are the real reason to appreciate this production. This dance-heavy musical lives and dies on its choreography, and luckily Jenny Barlow’s gorgeous routines elevate this production. “An American in Paris” contains an immense amount of material that fluidly mixes ballet, tap and traditional Broadway styles, and the talented ensemble ably performs every number. Both Woolstenhulme and Doherty give particularly stunning performances, making difficult choreography look blissfully easy.

Admittedly, the two leads falter a bit when they aren’t dancing. Neither are particularly powerful vocalists, and their chemistry, which is so apparent in the dance sequences, feels notably less powerful in the dialogue. It feels selfish to complain, however, when the movement is so genuinely spellbinding. When the performers are capable of reaching the stars, you can’t blame them for coming back down to Earth.

“An American in Paris” plays until April 6 at Hale Centre Theatre in Sandy. For more information, visit hct.org.