‘Men on Boats:’ A Flowing Triumph of Adventure and Danger 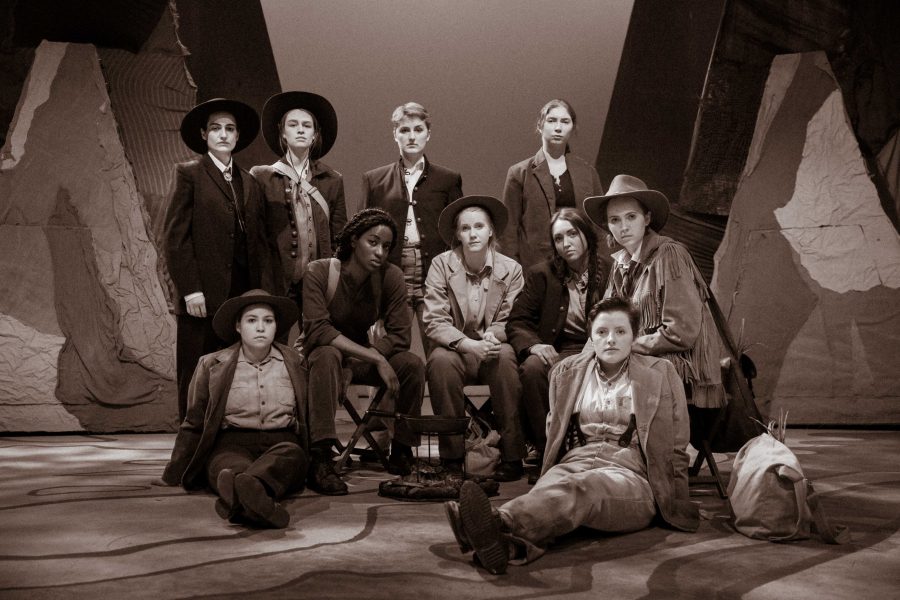 "Men on Boats" full cast credit U of U Theatre Department

“Men on Boats” is a rather ambiguous title for a play and, to be honest, it suits a rather ambiguous play. This charming tale starts out adrift and slowly brings the audience in as viewers figure out what on earth is happening. In a credit to director Sarah Shippobotham’s casting choices, the cast’s wide gender swap detracts nothing from the storyline — in fact, it adds an interesting element to see women addressing each other as men, while whining and bemoaning their extremely difficult journey like stereotypical women. Based on true events, “Men on Boats” is engaging, funny and even a little silly at times. The naming of Lake Powell after John Wesley Powell makes about as much sense as attempting to explore the Grand Canyon by boat before anyone called it the Grand Canyon.

These explorers were hardy and determined, but there is a lot of humanity in the play as they question their choices in the face of near-certain death. Mary Helen Pitman (Powell) carried the show with a stellar performance. She was vulnerable, uncertain and endlessly interesting to watch. Another standout was Ireland Nichols (Bradley). Her character was an exuberant first timer to the river who breathed life into even the darkest moments of the show. Each character had a distinct personality that shined through the aerobic storytelling process.

The actors were the boats and the river in one, with powerful voices and agile movement to convey the experience of everything from rocks to rapids. They even created a few waterfalls. The sheer physical stamina actors had to present was aided by a simplistic and yet amazingly versatile set and prop design. The set, created by Haley Nowicki, was painted in the familiar colors of southern Utah. It also featured a map-like floor painting, which was a basis for camp and a path through the twists and turns of the river. The props, created by Seth Lawrence Hampton, were simply amazing. Cloth and wood stools, a flaming campfire complete with cast iron skillet and even a few critters provided just enough context to root the story. The props also had a few tricks up their sleeves to startle audience and actor alike.

The costume design was a blend of browns and oranges matched the desert surroundings that the adventurers explored. At one point, Bradley complains all three pairs of his pants are wet from the river. The costumes, by Ariana Hatch, were the perfect assessment of the simple life and often lost belongings of explorers. Also noteworthy was the sound design, by Emily Chung and lighting design, by Drew Bielinski. The lights flickered and changed as the sodden rowers plunged underwater and fought their way through narrow canyons. Without the accompanying sound cues, this might have felt too theatrical and not quite realistic enough, but the crashing waves and screams of the drowning actors were sufficiently convincing to keep things exciting.

“Men on Boats” is a brilliant way to learn something new during a few hours of your night. The show runs for an hour and fifty minutes without an intermission in Studio 115 of the Performing Arts Building. Tickets are free with a student ID. The show closes on March 10. Don’t miss out.