Utah Takes 2 of 3 at LeClair Classic 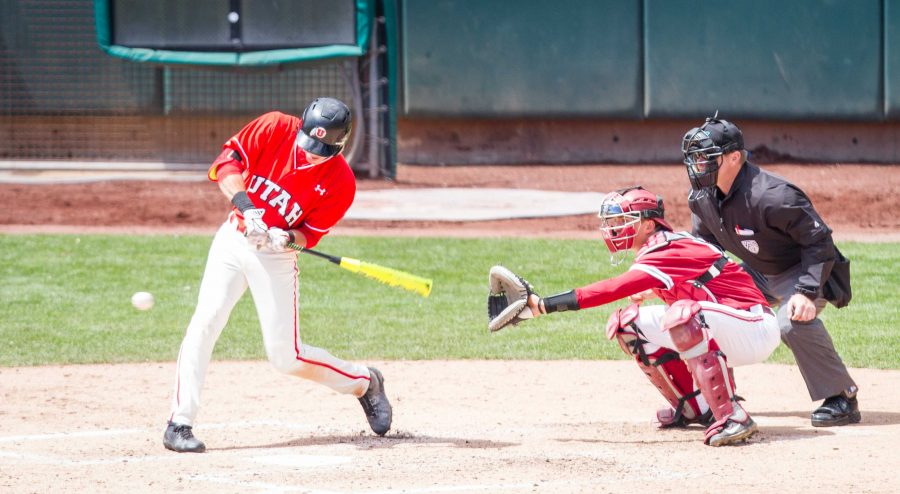 Game One: The Pirates

Utah struggled through the first three innings, falling behind early 4-0 in game one to the East Carolina Pirates.

Jayden Kiernan got the bats rolling in the fourth inning when he reached on a fielders choice, driving in Erick Migueles for the Utes’ first run of the game. Chase Fernlund doubled to center field scoring Kiernan and Shea Kramer to continue to chip away at ECU’s early lead.

Tyler Thompson singled an inning, which later brought Rykker Tom to the plate to tie the game 4-4.

Utah’s game against East Carolina was postponed at this point due to rain and was later scheduled to be played after the Utah vs. Western Carolina match-up on Saturday.

The game picked back up in the seventh inning, and ECU was the first to strike against the Utes. The Pirates scored two runs to start off the second half of the game to go ahead 6-4. Then, after Tom singled in the top of the eighth inning, Chandler Anderson homered to left field to tie the game once again.

Utah escaped a major jam in the bottom of the ninth as East Carolina’s second baseman, Brady Lloyd, flew out to center field with two outs and runners on second and third. The Utes’ valiant effort came up a bit short as the Pirates walked off with a bases loaded single up the middle to score the winning run. East Carolina topped the Utes 7-6.

Utah’s pitching staff threw gas and Utah’s bats caught fire leading to a dismantling of Western Carolina with 14 runs on 12 hits in game two of the LeClair Classic.

Utah started things off in the second inning when Matt Richardson singled up the middle, scoring Anderson and Tom to put the Utes ahead early, 2-0.

Migueles continued his early season RBI hot streak driving in Oliver Dunn in the fifth inning to add to the Utes’ lead.

Zack Moeller began things for the Utes in the seventh as he doubled to left field to bring Dunn to the plate once again. Migueles singled to right field bringing Moeller home to put Utah up 5-0.

The Utes’ bats didn’t even think about slowing down in the eighth inning as Kiernan reached first base on a throwing error which scored Anderson and Tom. Kiernan and Richardson would each score on wild pitches by the Western Carolina pitching staff putting the Utes ahead 9-0.

Isaac Deveaux continued the eighth inning hitting showcase as he singled to right field bringing home Dominic Foscalina. Deveaux crossed the plate himself a few batters later when Christian Almanza hit a single to right field. Kiernan singled driving in Briley Knight before Richardson found himself in position to help the Utes once again. He reached on a fielders choice, adding another run with Almanza touching home.

Riley Pierce, Jack Liffrig and Jake Dahle combined for a shutout against the Catamounts, giving up five hits and throwing three strikeouts. Utah went on to beat Western Carolina 14-0 before finishing game one against ECU.

A big first inning sparked the Utes in their game against the Wright State Raiders on Sunday afternoon.

Moeller started the game off with a single to left field which brought Knight around to score the first run of the game for the Utes. Migueles blasted a three-run home run on the next pitch to put the Utes ahead 4-0 in the top of the first.

Wright State tacked on a run in the fourth inning before the Utes added some insurance runs in the sixth. Dunn doubled to right field with runners on first and second to drive home Fernlund, and Moeller hit a double to left field which brought Knight and Dunn to the plate, putting the Utes ahead 7-1.

Moeller hit a three-run bomb to left field in the eighth inning, putting the Utes ahead 10-2. Wright State rallied for five runs in the bottom half of the inning to cut Utah’s lead to 10-7.

Utah didn’t let a big eighth inning from the Raiders fluster them though, as the Utes continued swinging the bats hard in the ninth. Knight singled with a runner on third, scoring Foscalina. Dunn showed off great base running and tremendous speed as the catcher overthrew second base trying to catch him stealing. Dunn rounded second base and took off for third when Wright State’s center fielder overthrew third base, allowing him to continue home to score.

Moeller was a triple away from hitting for the cycle as the Utes were able to hold off the late Wright State rally to beat the Raiders 12-8 and finish the LeClair Classic 2-1.

Next week, the 5-5 Utes will be playing at home for the first time this season against the 1-9 Purple Eagles of Niagara.

Niagara hasn’t had a great start this season, as their only win came against the New Mexico Lobos in rainy Albuquerque, New Mexico. The Purple Eagles finished the 2018 season with a 24-27 record and finished sixth in the Metro Atlantic Athletic Conference.

Three players to keep your eyes on for the Utes in their first home stand of the year are Migueles, Moeller and Dunn. Migueles has a hit in each game this season (16) and leads the team in RBI’s (12). Moeller leads the team in home runs (2), and Dunn leads the team in walks (14), doubles (7) and runs scored (15).

The Utes will play the Niagara Purple Eagles on Friday at 3 p.m., Saturday at 1 p.m. and Sunday at 1 p.m. at Smith’s Ballpark in Salt Lake City, Utah. If you can’t make it to the games this weekend, you can get live stats as well as watch a live stream of the games on utahutes.com.