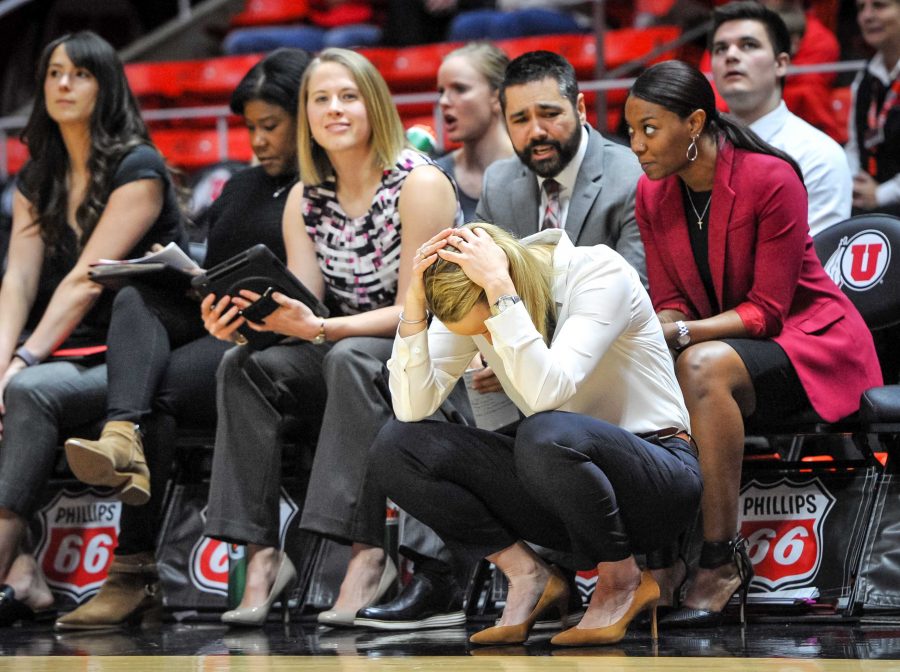 Utah Head Coach Lynne Roberts holds her head after Utah Utes center Megan Huff (5) fouls out as The University of Utah Utes take on the University of Oregon Ducks at the Huntsman Center in Salt Lake City, UT on Sunday, Jan. 28, 2018 (Photo by Adam Fondren | The Daily Utah Chronicle)

A ferocious Utah comeback in the fourth quarter fell just short, as the sixth-seeded University of Utah women’s basketball team fell in the opening round of the Pac-12 to the University of Washington, 64-54.

The Utes (20-9, 9-9 Pac-12) came into Las Vegas after one of the hottest starts in school history was met with a mediocre end to their campaign. The injury bug hit the team hard, and it showed in what would be their final game of the season, a game in which they were outmatched and outperformed by a well-rested Washington bench.

The Utes found themselves at a disadvantage from the get-go, with freshman of the year Dre’Una Edwards on the bench after a season-ending injury weeks ago. One of the more prolific scorers on the team was out for the year, and it showed immediately, as the team went 2-8 in the month of February, after a 16-1 start.

With the seven players the team going into the match, the Utes didn’t have much luck either. The once-hot three-point shooting Utes were stifled immediately and often would end the night with an abysmal 5-25 performance from beyond the arc. That’s a 20 percent three-point shooting output from a team that ranked ninth in the nation in that category, and second in the Pac-12 coming into the game while the team has been shooting 38 percent this season.

After a sluggish first half, the Utes looked to turn the momentum around to finish out a game they were favored to win. Their scoring drought would continue until over six minutes into the third quarter when a Utah bucket ended a 25-4 Washington run stemming back to the second quarter.

“I thought Washington played a heck of a game,” Roberts said. “They defended us well and so I congratulate them on advancing.”

Watching a Utah foe advance is, unfortunately, not a new sight for the team. With tonight’s loss, the team falls to a dreadful 2-8 Pac-12 tournament record. Their only two tournament wins came in 2013 and 2014, against Arizona and Washington, both of which came in the first round, and neither of those victories put the team past the second round of play. Since then, the team has seen a multitude of first-round exits, and tonight they added another tally to the loss column.

While the defense could not keep the Huskies off the scoreboard, the Utah scoring dried up as well. Two Utes — Megan Huff and Andrea Torres — hit 10 points on the scoreboard, and while Kiana Moore and Niyah Becker followed up with nine points, the production was simply not enough to keep pace with the Huskies offense. Washington forward Missy Peterson erupted with 34 points, going 8-13 from the paint and 6-8 from beyond the arc. Peterson’s six jumpers from downtown were more than the entire Utah team hit all night, a telling sign of Utah’s offensive struggles.

Roberts stressed looking at the positives and reflecting on what was a historic start for the team.

“When we came into this year, we said we wanted to do things that Utah basketball had never done in the Pac-12, and we did that,” she said. “I am incredibly proud of our team and their resiliency throughout this year and they have been a joy to coach.”

The resiliency that Roberts spoke of was not lost in this major upset. In the waning minutes of the fourth quarter, the team hit a switch and played with a level of ferocity often seen in the most epic of comeback efforts. The team played fiercely, winning 50/50 battles and was noticeably fearless in the face of foul trouble against an already-shortened bench. The team went on a 10-0 run, headed by strong play from Becker, but the effort wasn’t enough, and the team exited the tournament on yet another low note.

The Utes will not see any more action in this season, but the men’s team will finish their regular season on Saturday, March 9 at home against UCLA, and then they will make their own appearance next week in Las Vegas in the Pac-12 tournament.