Former Utah Supreme Court Justice Speaks on Equality at the U 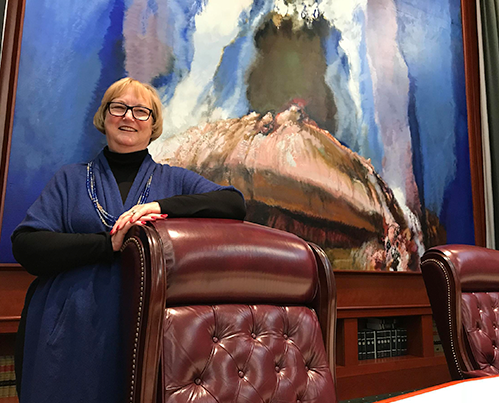 Before her talk, Durham told The Daily Utah Chronicle that she agreed to speak at the event because she considered Aileen Clyde a friend. In reference to Clyde, Durham said, “She has done an enormous amount of service for the court,” and, “I always considered her a mentor and like a second mother.” Durham also said that Clyde “epitomizes the life and accomplishments of the women in this archive.”

After her introduction by Judge Carolyn B. McHugh of the tenth district court, Durham began her speech by thanking the foundation and saying that it is “beyond appropriate [that] this archive should be named after Aileen.” Durham started with her experience on the “gender and justice task force” and said, “I was the person who knew most about gender and justice.”

Durham wanted students in the audience to know, “It’s hard to get in touch with the olden times because we experience the world as it is,” but that it is important to learn those things. Near the beginning of her speech, she asked the women in the audience, “Who remembers a time when they couldn’t get a loan or credit card by themselves?” Many women in attendance raised a hand.

Even though Durham recognizes the progress of women’s rights, she says there is some work that still needs to be done. She told the Chronicle, “I hope to remind today’s students, especially women students, with all that has changed there are still enormous things to be done.” Durham said that “women have been tempted to be complacent about their opportunities” because of the progress, but that there are still systems that are meant to undermine progress, including “implicit bias and sexual harassment.”

The Aileen H. Clyde 20th Century Women’s Legacy Archive is focused on collecting historical records of women throughout history. Durham states that she was selected to speak at the event because of her “experience during the history.” She offered observations of women’s rights and opportunities as they are now and how it should look in the future.

Emilee Carr, a current BYU student, traveled from a different school just to hear Durham speak, stating that she was “interested in Utah culture and inspiring women.” The majority of the students that were in attendance for Durham’s visit came from a school other than the U. According to BYU student Beck Seamons, attendance at the event “fulfills an assignment for a class.”

Durham spoke about the women’s movement in the early days of the “second wave,” a time during which she herself was fighting for her right to an education in law. She recounted a story about a friend of her husband that had worse grades and test scores than she did who was able to get into Harvard Law School, while she did not. Durham ended up getting her law degree at Duke University which she said was “better.”

Her ultimate message was that “the torch is being passed from women of my generation to your generation, and it’s very important to educate yourself about the future and the past.”