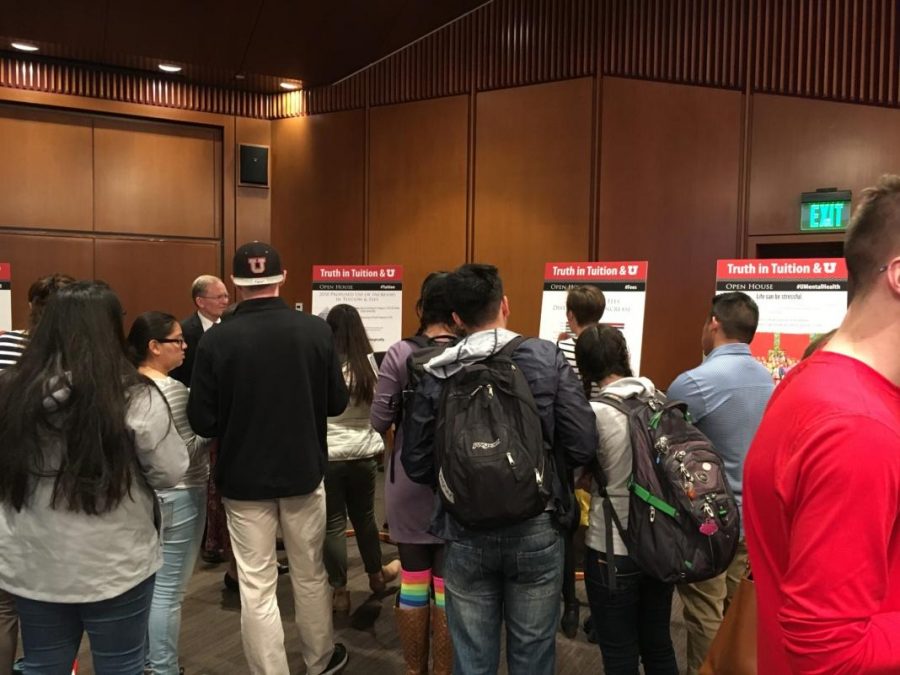 Students, faculty and administrators gather to discuss recent increases in tuition at the Gould Auditorium on March 13, 2018.

The University of Utah proposed a plan that would increase tuition by up to 3.9 percent beginning as early as summer term 2019.

“When we look at our biggest resource, it is staff,” said Cathy Anderson, Chief Financial Officer at the U, to the U’s Board of Trustees. The nearly $12 million additional costs would be for the purpose of hiring new professors and administrators at the U.

Institutional data indicates that the influx of new faculty members at the U outpaced new students nearly three to one in the last year.

Tuition increase has been an annual occurrence at the U for the last ten years. The proposed increase would not be any larger compared to the previous three years and would also be less than the 9.5 percent increase that occurred ten years ago. However, due to the steadily increasing tuition raise each year, the proposed increase is actually a larger amount of money because the percent is calculated from the increased tuition from the previous year.

Over the last ten years tuition has increased by about 75 percent, which is much more than the inflation rate of only 18 percent of the same period of time.

The tuition increase would be used for more than just hiring new faculty. Some of the money would be set aside for salary increases for workers and increasing safety on campus. Safety on campus has been a hot topic of discussion on the U’s campus, especially since October 2018, and the money would help put into place some previously proposed campus safety initiatives.

The U’s tuition is not as high as the rest of the universities participating in the Pac-12. The U is also significantly cheaper than the Big-10 institutions, but still faces criticism regarding the proposed tuition increase.

According to data reported to U.S. News in an annual survey, state residents at public colleges paid an average of $9,716. Students who are residents at the U paid about $9,222, keeping them below the national average for in-state tuition costs.

Students and parents are expected to have mixed opinions on the tuition increase for the 2019-2020 school year. Emma Pinegar, a computer science major at the U said, “I’m happy to pay more for my education if it means that the campus is safer and the quality of my education increases,” but that “while this change looks great to me, I think that the consistent increase in financial burden could become a deterrent for some looking to pursue education at the University of Utah.”

Even though the U’s Board of Trustees has granted support for the plan, the state’s Board of Regents still needs to give their approval before any tuition increases can move forward.

The decision from the Board of Regents will be finalized when they meet next on March 28-29. All concerned students and citizens are invited to the public hearing on the proposed increase at the Truth in Tuition event on Tuesday, March 19 from 1:30 p.m. to 2:30 p.m. in the Marriott Library Gould Auditorium.

According to the event website, “The University Administration will explain the reasons for the proposed tuition increase, address the total increase in tuition to the extent possible, discuss expectations for allocating the increased revenue and answer questions regarding the increases.”

In an earlier version of this article, the meeting of the Board of Regents was incorrectly listed as March 19. We regret the error.