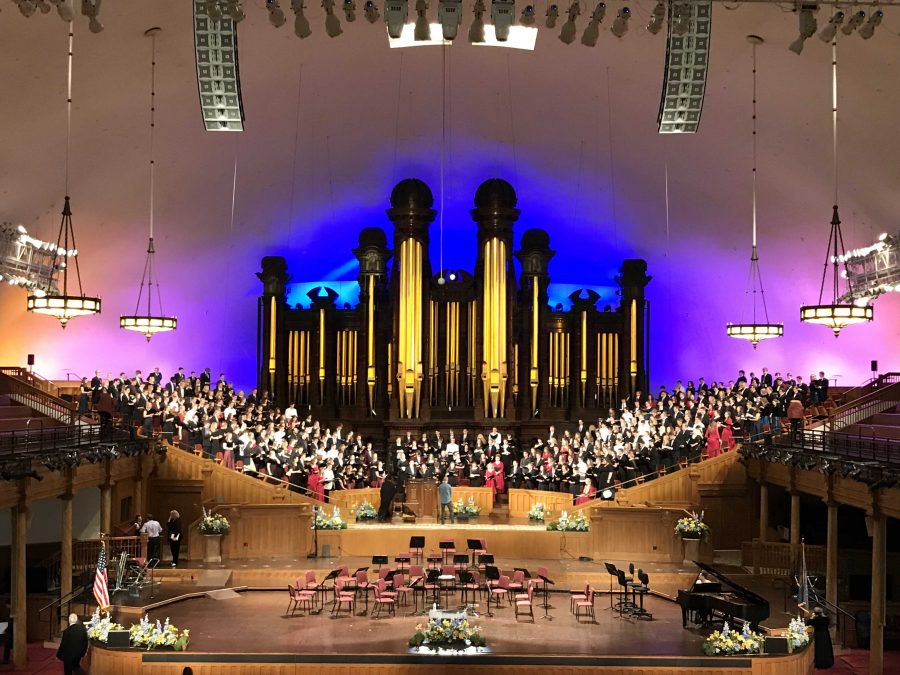 Choirs from the U perform with various high school choirs from Utah. courtesy University of Utah Choirs

The University of Utah’s Choral Area of the School of Music presented a concert on Friday, March 22 at the Salt Lake Tabernacle. The school collaborated with various high schools across the state for a night of beautiful acoustics. Each school prepared a song individually and then came together for a final piece.

After rushing in from the evening drizzle, the audience filled up the rows in the Tabernacle. The U Chamber Choir, led by Barlow Bradford, opened up the concert with a rendition of “O Salutaris Hostia,” which translates to “O Saving Victim.” Whereas the opening prayer reverberated in the egg-like building, the music from the group filled the space without a noticeable echo. The soloists, Lexie Davis and Mikaela Holbrook, wove their higher vocal registers together, creating a richly textured first piece for the concert. 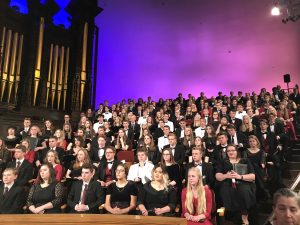 Following their performance, the Chamber Choir members moved from the front of the stage to the rows in front of the organ. Conducted by Leslie Walker, the Springville High School’s Chamber Singers performed next, singing “J’entends le Moulin,” arranged by Donald Patriquin. Using unexpected sounds with their mouths and clapping, the group transformed the captivating spiritual setting into one of engrossing urgency and excitement.

The U’s A Cappella Choir possibly had the most surprising performance. Midway through their piece, “Nyon Nyon,” they broke into dance. Although staying in their individual places, the dance was practically freestyle, each member letting loose and having fun. The audience was caught completely off guard and couldn’t help but laugh, especially after an evening of such serious performances.

The final piece was a requiem titled “Lux Aeterna,” and was broken into five movements. At this point, each group had been situated in front of the organ pipes, noticeably representing their school by their dress. A full orchestra was incorporated for the piece, initially trading the melody back and forth with the vocalists. Eventually, though, both the orchestra and the vocalists added to the composition simultaneously, with the piece becoming increasingly engaging and complex.

The concert brought variety and talent from across the state, inspiring a standing ovation and a very satisfied audience.