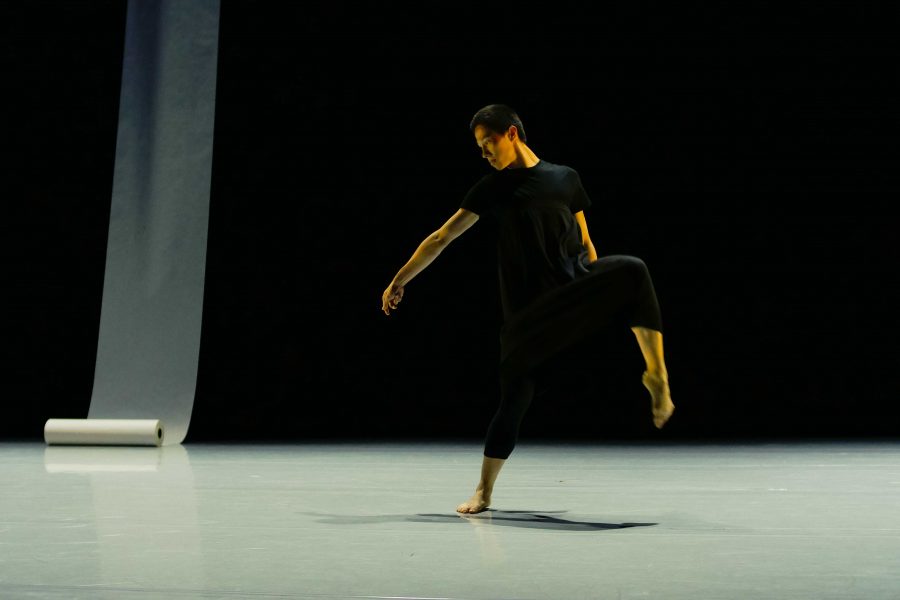 Chang Liu performs in his own piece "Ma (間)." Photo by Tori Duhaime.

Chang Liu is a third-year modern dance MFA candidate in the School of Dance at the University of Utah. His most recent accomplishment is the creation of a piece called “Ma (間).” Liu presented “Ma (間)” at the gala concert of the American College Dance Association Northwest Regional Conference, which was held at the U from March 13 to 16. Adjudicators selected the dance for the 2019 Northwest Gala, alongside nine other dances from various universities across the northwest.

Liu began dancing when he was four years old in the city of Wuhan in China. He received his undergraduate degree at the Beijing Dance Academy in 2012, where he trained mainly in Chinese dance. Liu decided to leave China and attend the U because he wanted to explore the world beyond his home country’s borders. He was also drawn to the freedom that artists have in the United States to make their own creations. “People really respect what you want to make,” said Liu.

One of his greatest challenges in the School of Dance was overcoming the language barrier. In the beginning, according to Liu, “We had a lot misunderstandings … between me, the faculty members and my classmates.” Over the course of his time at the U, he has become more confident in communicating and now teaches in both the modern and ballet departments. In addition to teaching multiple classes, Liu is a teacher’s assistant for a guest choreographer and for Modern Dance Program Head and professor Steve Koester, an editor in the AV room and a stage crew member. What makes Liu most proud of himself, however, is his newfound love for everyone around him. Over the years, he has worked on becoming more open-minded and positive towards new people and experiences. “That’s a different me from before,” Liu said.

Liu’s choreographic processes attest to his focus on self-development. Instead of making frequent projects to please audience members, he spends a lot of time on a single piece with only his own expectations in mind. “Art is very serious for me,” said Liu. “Every time I make a piece, I just [treat it] like it is the last piece in my life.” Many modern dancers create an abundance of material and remain detached from the majority of the process. Although Liu respects the mechanisms other dancers use to produce movements, he values spending time on smaller portions of material. He also views dance as more than simply a tool. Liu said, “I don’t have a religion, but I do have a belief [that] there is a god of dance.” Liu warned others against placing art on the same level as the artist.

Through the creation of “Ma (間),” Liu explored several concepts which were lost when religion was banned from China. Among them were “chan” (zen), “wabi-sabi” (a Japanese term which means the power and acceptance of imperfections) and “ma.” “Ma” has several meanings. Its implications include the ideas of negative gaps in space and the potential for growth and freedom within these gaps. Liu questioned why the Chinese people have never had zen art. “I want to create my [own] zen art,” he said.

“Ma (間)” was the culmination of his desires and research. The dance featured himself and undergraduate senior Bayley Smallwood. Although Liu did not focus on his relationship with audience members, his piece was evidently a jaw-dropping work of art. The costumes, lighting and even several phrases of the movement were stunningly simple, but it was clear that the contexts of his piece were profound. During the dance, Liu and Smallwood drew Chinese characters on large scrolls of paper, which Liu explained were from a famous zen poem. “All deep meanings are [hidden] in simple words,” Liu said in reference to the poem. These words of wisdom encapsulate Liu’s life aspirations. After leaving the U, Liu hopes to join a small dance company where he can live free from the pressures of being a well-known artist.