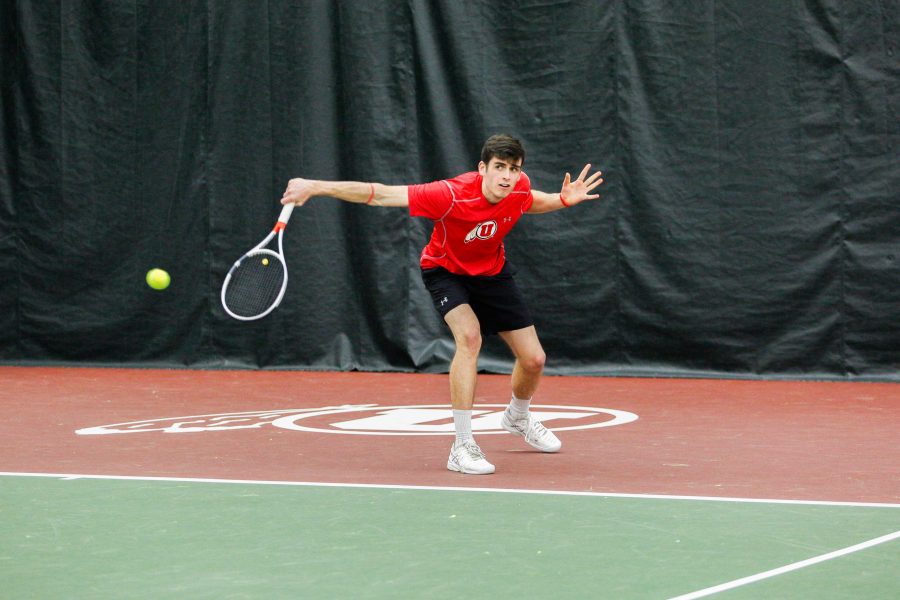 The University of Utah’s men’s tennis team features a blend of youth and veterans that should give the Utes a fighting chance in their Pac-12 competitions. With a winning record so far this season, it’s evident that this team strives to be the best and should not be overlooked.

There are many factors as to why the U’s men’s tennis team has been so successful as of late. One of the main reasons is senior Dan Little.

Little is the number one singles player from the team, as he consistently battles the top players in the country in an extremely competitive Pac-12 division. Prior to reaching in Utah, Little earned one national championship, while also being a runner-up two times in Great Britain. He also competed in the 2014 Junior Wimbledon Championship, however, he fell to No.55 in the world, Jordi Arconada. Little had also won three ITF junior singles titles and four ITF junior doubles titles. While doing all of this, he reached as high as No. 192 in the ITF Junior World Rankings.

In his freshman year at Utah, he was named an ITA Scholar Athlete and did not disappoint. During the year, Little defeated Sameer Kumar of No. 21 Stanford, 6-4, 6-4. He also defeated David Fox of No. 47 Denver, while earning another Pac-12 win by defeating Arizona’s Jason Jaruvang, 7-6, 2-6, 6-1. Little not only did damage in the Pac-12 but also in non-conference games.

In the ITA Men’s All-American Championships, Little defeated Sam Giammalva of No. 14 Texas A&M, 6-2, 6-2. He earned six wins at the Utah Invitational Tournament in double actions, in which he teamed up with Matt Cowley to defeat No. 16-ranked Maciek Romanowicz and Tom Fawccett of Stanford, 6-3. They also beat Wendell Watanabe and Piers Foley of No. 39 Washington, 6-1. Little also notched five wins at the 2015 USTA/ITA Men’s Mountain Regional Championship, which included victories over Yannik James of No. 47 Denver, both Adrev Goryachkov and Keaton Cullimore of No. 61 BYU and Augustus Ge of No. 69 New Mexico.

After his freshman year wrapped up, it was clear that Dan Little was a player on the rise and definitely someone that should not be counted out. In his sophomore campaign, he was named the ITA Player to Watch. Little defeated No. 41 Martin Redlicki of No. 5 UCLA, 7-5, 6-1. Little also topped teammate Enzo Sommer 6-4, 6-2.

What was more impressive was that he defeated nationally-ranked Mitch Stewart of Washington, 6-4, 6-1. He won 13 singles competitions in dual match play that year, while also defeating Jaime Barajas of No. 45 Utah State, 6-1, 6-4. At the ITA Mountain Regional Championships, Little captured six games, which included a 7-6, 6-4 victory over Jonas Maier of No. 45 USU.

Dan also finished with 10 double wins during this season, which featured him teaming up with Joe Woolley to make the finals at the National Collegiate Tennis Classic with three wins. He also teamed up with Slava Shaniyan to pick up a doubles victory at the ITA Mountain Regional Championship. He would later team up with Shaniyan once again, as they would ultimately win the Utah Invitational double tournament. Little would also team up with Santiago Sierra and would win four matches together at the Dar Walters Fall Classic.

In Little’s junior campaign, he was named as a Pac-12 All-Conference honorable mention, while being on the second-team Pac-12 All-Academic. He was also Utah’s No. 1 singles player with 17 singles wins in dual action, while also going on a 16-game win streak that lasted just over two months. He played extremely well against single players that come from nationally ranked teams as well. Some of the victories include Little topping No. 33 Harvard, No. 38 Arizona State, No. 50 Utah State, No. 54 UC Santa Barbara, No. 67 BYU, No. 69 Virginia Commonwealth, No. 71 Wichita State and No. 75 New Mexico. Little’s junior year with the Utes ended up being a successful year, as he was able to produce victories over tough opponents.

With this being Little’s final season with Utah, he’s had a huge impact on the team. This year’s team features many overseas players and Dan Little expressed relief while realizing that.

“It’s comforting to know many of the players come from far away as well, and I can get to know everyone knowing I’m not the only one who comes from a different culture,” Little said.

Utah’s head coach, Roeland Brateanu, is from overseas as well. Brateanu describes this team as a very “talented” group and had also stated that this team was ready to win, regardless of race and a variety of background from this squad. “The ball is round and you have to play the game regardless of where you’re from,” Brateanu said.

Over the course of the past four years, Little has been an example of what it takes to be a successful athlete. With the Utes improving as the season progresses, there is no doubt that Little will lead the way both on and off the court.