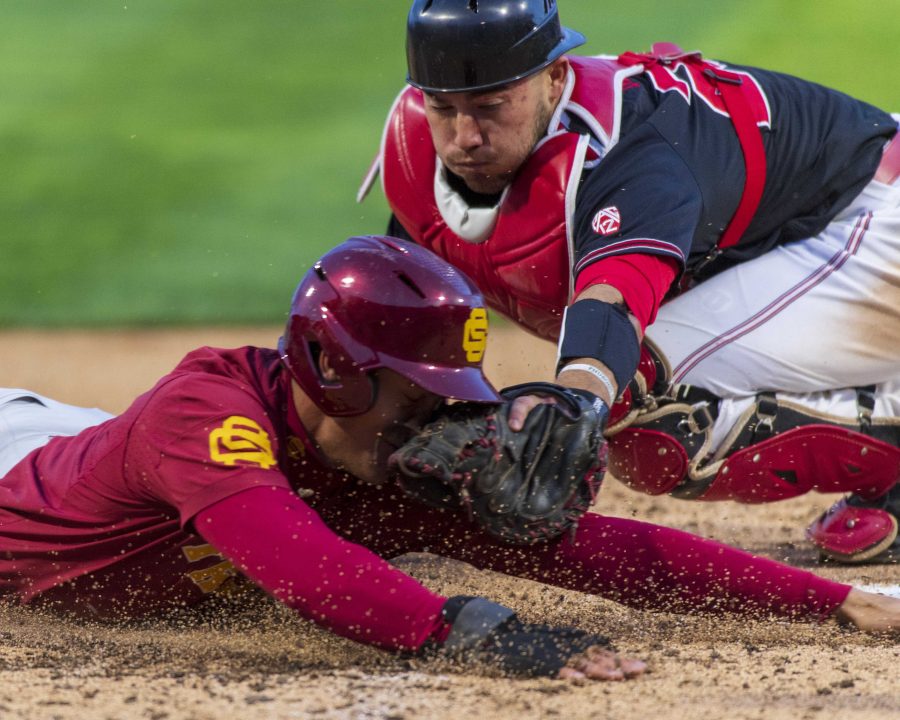 University of Southern California senior infielder Chase Bushor (15) gets tagged out by University of Utah redshirt junior catcher Zack Moeller (28) after a 9-4-2 during an NCAA Baseball game at the Smith's Ballpark in Salt Lake City, Utah on Thursday, April 11, 2019. (Photo by Kiffer Creveling | The Daily Utah Chronicle)

The University of Utah baseball team won its first conference series hosting the USC Trojans over the weekend.

USC struck first in the top of the third inning when Jamal O’Guinn singled to drive in Blake Sabol. With runners on the corners with one out, the Trojans hit a sacrifice fly, which allowed them another run to score. A great pickoff move from Riley Pierce ended the top half of the inning with the Utes down 2-0.

Zack Moeller was able to get the first hit of the game for the Utes in the bottom half of the third. Utah wasn’t able to get anything else going in the inning, being sat down on a strikeout and fielder’s choice.

The Utes gave up one run to the Trojans in the seventh, and three in the eighth to fall behind 6-0.

Defensively for Utah, Briley Knight was a vacuum in center field, making two extraordinary diving catches. Erick Migueles also had a fantastic run-saving play in the seventh with a ball hit off the wall after turning and throwing to Oliver Dunn, who fired a strike to Moeller to throw out a Trojan at the plate.

USC’s starting pitcher, Connor Lunn, had a career night against the Utes, going six innings and giving up one hit and nine strikeouts.

“It was a rough night at the plate tonight so I did my best to do everything I could to be successful on defense,” Knight said after Game 1. “We can’t look down. We might not have had a lot of hits tonight, but you never know, we could get sixteen hits tomorrow. That’s how baseball works, we’ve just got to keep our heads up and just keep pushing.”

Game one finished with USC throwing a one-hitter and beating Utah 6-0.

Knight’s vision of Game 2 came true as the Utes took off for 11 hits, which included five doubles. Three of Utah’s five runs came with two outs, leading them to victory over the Trojans 5-4.

Utah’s bats started the game strong as the Utes took a 1-0 lead off of a Shea Kramer single in the first. Matt Richardson helped the Utes add to their lead in the fourth inning, singling to score Chase Fernlund.

With runners on the corners in the sixth, Dunn had a crucial squeeze bunt which brought Knight home. Moeller’s single one batter later brought Richardson home to put the Utes on top 5-3.

Brett Brocoff was stellar, once again, on the mound for the Utes, throwing 6.2 innings and allowing four runs. He also struck out two batters and gave up eight hits in the effort.

Three Utes chalked up two hits with Fernlund leading the way with two doubles. Friday’s game finished with Utah getting their first conference victory since their match-up with Arizona on March 15.

Migueles was the hero of Game 3, going 3-3 with three doubles and three RBI. He led the way for the Utes in a 5-4 victory, chalking up Utah’s first conference series win on the season.

The scoring began in the first inning when Dunn trotted home after a Kramer single to center field.

USC found a bit of offensive firepower tying the game at one in the third inning. Migueles doubled in the bottom half of the third to drive in Dunn and Fernlund, putting the Utes back on top 3-1.

The Trojans tied the game once again with runs coming in the fourth and fifth innings. Migueles doubled for the third time later in the fifth to put the Utes ahead 4-3.

Dunn added an insurance run in the seventh inning for the Utes, doubling to left field and scoring Richardson. USC’s effort at a comeback came up short as only one run came across the remainder of the afternoon.

Joshua Tedeschi had a good day on the hill throwing 6.2 innings, giving up three runs on six hits.

The Utes will take on the Utah Valley Wolverines on Tuesday, April 16 at 6 p.m. at Smith’s Ballpark. Tuesday’s game against the Wolverines will be televised on Pac-12 Networks. Utah will then look to take on the Arizona State Sun Devils at Smith’s Ballpark the following Thursday and Friday at 6 p.m. and Saturday at 1 p.m. The weekend games can be streamed on Utah’s live stream which can be found on utahutes.com.